The Nintendo Switch isnâ€™t the only console prone to receiving belated conversions. Developer Witch Beam seemingly postponed the Xbox One version of this twin-stick shooter until the arrival of the Xbox One X. Itâ€™s an understandable decision, and not just because thereâ€™s an unspoken rule that every new console must launch with a snazzy twin-stick shooter nowadays.

While a tad tardy (the PS4 version launched in 2016), Assault Android Cactus is a welcome addition to the Xboxâ€™s library. The character roster comprises of chibi-style androids with bulbous heads, giving it a twee, almost anime influenced, art direction that we donâ€™t often see around these parts. Moreover, itâ€™s an incredibly well-designed game. Fresh, frantic, and filled with personality. 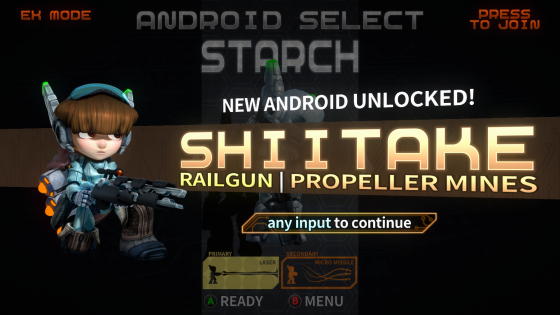 Plucky green-haired android Cactus is the lead character – hence the gameâ€™s peculiar title – and after crash landing on a colossal space-cruiser filled with rampaging robots, she rallies up the remaining allied androids to fight back. Each playable character has their own weapon set, as well as different dialogue during the brief and comical cut-scenes. They come packing a positive â€˜can-do attitudeâ€™ too. Well, all aside from Starch – a somewhat creepy monochromatic android that yells random words.

The Xbox One certainly isnâ€™t short on twin-stick shooters, so itâ€™s pleasing to see that Assault Android Cactus has more than a couple of tricks to make it stand out. Rather than providing a quickfire arcade-like experience, thereâ€™s a fully-fledged campaign to play through with an overworld map, unlockable extras, different stages, and a guardian to beat at the end of each zone. Bosses are themed around the space-cruiserâ€™s floors, with the security department featuring a large brute clutching a pair of riot shields and the shipâ€™s garden having a plant-like entity. 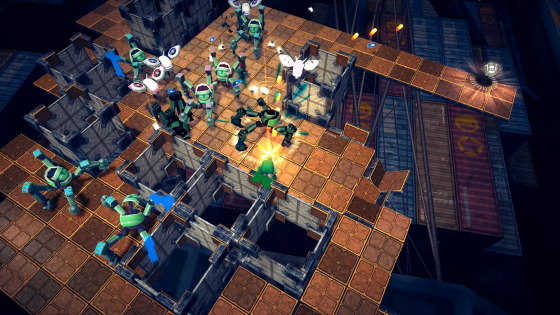 Stages can be tackled in any order and each is slightly different from the last, ranging from single-screen arenas to levels that scroll from left to right. There are even boundless stages with floor tiles that unfold as you move, forming a constantly shifting, forever changing, battlefield. Coupled with the fast pace – rebellious robots constantly flood the screen, crawling out from the depths below – these stages are quite the spectacle.

Fresh, frantic, and filled with personality

Thereâ€™s a gimmick present, too. A real doozy that adds a sense of urgency. The androids have a battery gauge to keep an eye on, which acts differently from the health bar â€“ if the battery depletes, itâ€™s game over. New battery packs appear only once a wave has been beaten or the screen has been cleared, so thereâ€™s focus on haste.

This ties in with the fact that there are no extra lives â€“ after taking a few hits, your android falls to the floor and requires a spot of button bashing to revive; a task that takes up valuable time. This mechanic really comes into its own during the boss battles, which can take a fair few attempts to beat due to the complexity of the attack patterns. 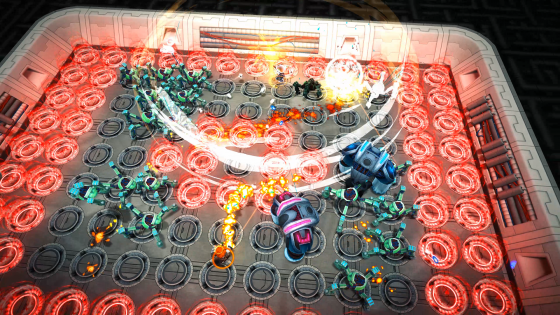 Bosses only drop battery packs after taking a certain amount of damage; damage that must be dealt before the battery is drained. Because the weapon types are a mixture of short range, long range, charged, and spread shots, this allows for a degree of experimentation. Every android also has a powerful secondary weapon with a short cooldown period. Youâ€™ll soon learn that using these proficiently and promptly is key to swift success, and crucial for bagging those elusive â€˜S+â€™ rankings.

With a relentless pace, challenging boss battles and a smattering of innovation, Assault Android Cactus is an easy recommendation for fans of twin-stick shooters. The only downside is the shortness of the campaign, which isnâ€™t a huge issue considering there’s an endurance mode and a wealth of extras. The fact that one of these is a â€˜normal sized head modeâ€™ should be enough to inform that youâ€™re in for some light-hearted fun.