Countless movies, cartoons and comic books released in the ‘80s were perfectly suited for video game adaptations. Sadly, the limitations of ‘80s consoles meant that many franchises turned into tie-ins fell short of their potential. The industry was going through a ‘lazy cash grab’ phrase at the time too, lest we forget. Wear the T-shirt, consume the endorsed junk food, play the game. 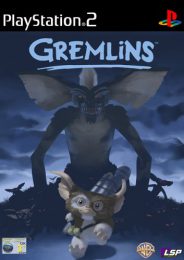 Whereas the likes of Transformers, Back to the Future and Ghostbusters did eventually receive games worthy of their name, fellow ‘80s franchise Gremlins wasn’t as lucky. The Game Boy’s Gremlins 2 tie-in from Sunsoft is usually seen as the pick of the litter, if only because of its superb music.

A game set in the Gremlins universe certainly has potential; an endless supply of ferocious critters, petrified of bright lights and able to spontaneously reproduce if touch by water. Gremlins 2’s infamous science lab scene also introduced us to a new wave of nasties, with the mischievous menaces evolving into bats, spiders and, err, the vegetable gremlin.

In 2001, French publisher LSP – best known for the CT Special Forces series – acquired the rights to the Warner Bros. comedic horror franchise. Licensed games were LSP’s main source of income, with tiles based on Inspector Gadget, The Extreme Ghostbusters, and Felix the Cat in their portfolio.

LSP planned handheld and console Gremlins games, but only 2001’s Gremlins Unleashed on Game Boy Color and 2002’s Gremlins: Stripe vs. Gizmo on Game Boy Advance made it to store shelves. Their console adaptation – simply known as Gremlins, but sometimes inexplicably referred to as Gremlins Revenge – was cancelled before release. Curiously, LSP had even gone as far as to pencil in launch dates – 11th April 2003 on PlayStation 2, and 30th November 2003 on GameCube.

Rather than take the form of a 3D platformer, as you may expect, LSP’s Gremlins was in fact a squad-based shooter. Presumably, the popularity of such games as Conflict: Desert Storm, Freedom Fighters and Full Spectrum Warrior had something to do with this. This was a time when publishers were prone to copy anything that had proven popular, hoping to recreate a similar success. 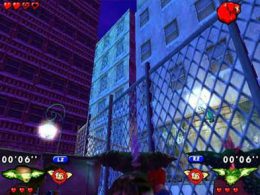 Set 20 years after the original movie, a ceremony celebrating Gizmo’s historic exploits goes awry after a leaky gutter spills water over the loveable Mogwai. This results in Stripe, a new Gremlin with a dashing white mane, springing to life and going on a rampage. The intro movie was uploaded onto YouTube several years ago. Even by 2003’s standards, it wasn’t too pleasing on the eye. Moreover, the Mogwais converse in a peculiarly articulate manner.

Viewed from a third-person perspective, teammates could be issued commands via the shoulder buttons, and both Gizmo’s gang and Stripe’s army were playable. This provided two campaigns to play through from different perspectives – one of the game’s most notable features. Eleven familiar locations were set to feature, including Billy’s school and the town’s bank, cinema and courthouse. 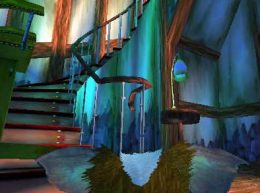 Key locations would also include a boss to beat. A former developer mentioned on Unseen64 that a bank robber, scientist, and disco dancer were the planned bosses, along with a final confrontation with Stripe. As well as standard gremlins, some would take on alternative personalities too, dressed up as mafia members, policemen, and scientists. It’s safe to assume they would have different attacks and skills to the garden variety gremlins.

From what we can ascertain, no playable builds were shown to the press. Apart from the leaked intro, all known information comes from LSP’s official product description and the screenshots issued alongside it.

With no hands-on impressions out there, it’s hard to tell if the game’s cancellation was due to quality issues. LSP wasn’t exactly known for publishing quality software – most of their titles were middling at best. It’s fair to say, however, that Gremlins was looking far more accomplished and complex than their previous works. 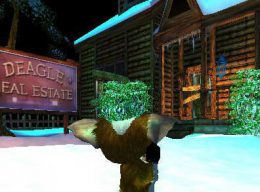 In 2004, LSP merged with Hip Games – a publisher with ties to Titus Software – and this event seems to signify Gremlins’ death knell, as it was never heard of thereafter.

The proposed release dates came and went, and no revised dates were ever revealed. We’d hazard a guess that it either fell behind schedule or LSP/Hip Games was hit by a cash flow issue. Their last titles before closing their doors were PC conversions of console games for Namco, suggesting they no longer had means of funding in-house development.

Whereas LSP’s Gremlins was cancelled outright, the most recent Gremlins game merely never made it to Europe. Consider this a bonus fact, if you will. 2011’s Gremlins Gizmo, released on Wii and DS, focused on the cute and cuddly side of the franchise, starring Gizmo and his Mogwai chums in a selection of mini-games. With one mini-game being a clone of the arcade classic Asteroids, and another being a colouring-in book, it’s safe to say us Europeans didn’t miss much.