It was a close battle between Super Mario Odyssey and Assassin’s Creed: Origins, but in the end, Ubisoft’s franchise reboot pipped the ex-plumber to no.1.

While Origins did have a stronger launch than Watch_Dogs 2, sales were almost level with 2015’s AC Syndicate – a franchise low point in terms of week one sales. Digital sales aren’t included in the chart however, and revenue was higher than Syndicate due to the popularity of Origin’s Gold and Deluxe editions.

Super Mario Odyssey was forced to settle for #2. As mentioned, it was a close call – it managed to outsell the PS4 version of Origins, but not the Xbox One and PS4 iterations combined. 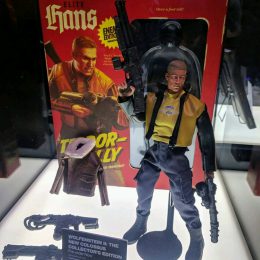 Odyssey had a stronger launch than Zelda: BotW, and as such, it’s the fastest-selling Switch game so far. It also had a better first week than any Wii U title, leading it to become Nintendo’s 6th biggest UK launch of all-time.

The gloriously grisly Wolfenstein II: The New Colossus debuts at #4, achieving sales roughly half of the original. With the sluggish sales of Prey and The Evil Within 2 in mind, Bethesda are likely wondering what the future holds for single-player games.

Wolfenstein’s second-week sales may pick up some slack – Bethesda’s games tend to have a stronger second week than the first, thanks to word of mouth spreading and belated reviews.

Elsewhere in the top ten Gran Turismo Sport shifts down to #5 during its second week on sale, while South Park: The Fractured But Whole falls from #3 to #8.

Just Dance 2018 was the week’s only other top 40 new entry, arriving at #23. Amazingly, it was the Wii version that was the biggest selling, gaining 32% of sales. What a trooper!