FIFA 18 falls to #2. FIFA 17 only managed a three-week run as well, coincidentally, toppled by EA’s own Battlefield 1.

At #3 itâ€™s South Park: The Fractured But Whole. The crude cartoon RPG matches 2014â€™s The Stick of Truth for week one sales, which is an encouraging start. 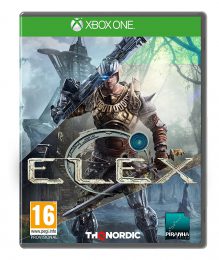 Chart-Track also reports sales of WWE 2K18 â€“ in at #4 â€“ were down over WWE 2K17, but revenue was higher due to the popularity of the deluxe and collectorâ€™s editions.

LEGO Worlds and Forza Horizon 3 depart the top ten, but we donâ€™t doubt that both will be back during the run-up to Christmas.

Fire Emblem Warriors is the next highest new entry, arriving at #16. The Switch version was the biggest selling, and by quite some margin.

Despite some less-than-positive reviews, THQâ€™s open-world RPG Elex made #25. It also managed to scrape into the PS4 top 20.

Rogue Trooper Redux turns up for duty at #37. Fellow retro revamp Syberia â€“ an adventure game dating back to 2002 – also shows its face at #30 in the Switch chart.