Thereâ€™s nothing more magical than a Sunday night. A few sacred hours to wind down and relax, and perhaps reflect on the challenges the past week has posed. Then as you slip into bed for an early night, with a roast dinner and an unhealthy dose of nanâ€™s homemade trifle in your belly, you awake Monday morning ready to tackle the next seven days. Itâ€™s a scenario many are likely familiar with. 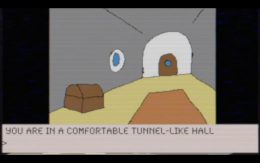 Thatâ€™s unless youâ€™ve been â€œlogging onâ€ to YouTube to watch Mr. Biffoâ€™s Found Footage. A Kickstarter-funded collection of weird and wonderful skits and shorts, purposely designed to fill your headspace with images of absurdity and tuneful melodies dedicated to computer industry pioneers.

Airing 9pm Sunday for the past six weeks, choice cuts from past episodes include an animated short of 2001: A Space Odyssey, musical homages to Clive Sinclair and Steve Wozniak, and parodies of GamesMasterâ€™s consultation zone presented by Goujon John – a reoccurring character that ties episodes together in the darkest, and daftest, imaginable way. 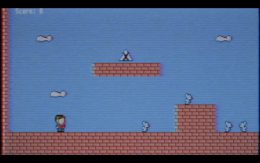 Presented in â€˜80s VHS-o-vision, Found Footage is much more than it initially appears. Amongst adverts for spoof products, music videos, clips of faux video games â€“ including a couple of graphical text adventures with unfortunate endings â€“ and cameo appearances from the likes of Danny Wallace, Robert Popper and Iain Lee lies something deeper and darker still â€“ a slowly unravelling conspiracy.

The penultimate episode ended with a raid on Xenoxxx Industries, the shady corporation behind many of the products and TV shows shown in Found Footage â€“ VHS tapes Mr. Biffo allegedly found at a car boot sale one dizzily afternoon.

The grand finale is set to take us away from silly skits, to an ambitious standalone sci-fi short – The Trojan Arse Protocol. Clearly influenced by John Carpenter’s The Thing and Ridley Scottâ€™s Alien, itâ€™s far slicker and professional than its small budget would lead you to believe, and also retains the absurdity that came before it. Youâ€™d never guess that it came from the mind behind Pudsey The Dog: The Movie.

Filmed over the course of two days at Drakelow Tunnels â€“ an abandoned nuclear bunker deep beneath the Midlands â€“ the final exposes the truth behind Xenoxxx Industries and an impending alien invasion from an arsed-faced entity.

â€œI think Iâ€™ve created something that is completely original, extremely high quality, and â€“ most importantly â€“ done it without the backing of a TV channel or movie studio,â€ said creator Paul Rose.

The Trojan Arse Protocol premiers 9pm this Sunday. If you havenâ€™t subscribed to Paul Roseâ€™s channel already, then be sure to do so. We can safely say YouTube is about to have a â€œfunny turnâ€ – just like that time nan put too much sherry in the trifle.