Despite the immense popularity of such games as Golden Axe, Streets of Rage, and Final Fight in the â€˜90s, modern-day scrolling beatâ€™em ups tend to come and go without fanfare. Even Double Dragon IV, released on PS4 and Switch earlier this year, failed to generate anything resembling a buzz and that was once the biggest name in side-scrolling brawling.

The lack of excitement for new scrolling beatâ€™em ups seems to stem from the fact that the genre hasnâ€™t evolved a great deal. Certainly not in the same way that RPGs, first-person shooters or adventure games have. They tend to stick to an overfamiliar formula â€“ choose a character and then make your way to the right of the screen, picking up weapons and stopping to fight bad guys before taking on a boss. With a lack of surprises and innovation, thereâ€™s little cause for excitement.

Developer Paw Print Games seems to be aware that the genre has been stuck in a rut for a while, as the London-set Bloody Zombies (howâ€™s that for a pun?) has a unique twist â€“ PSVR support. 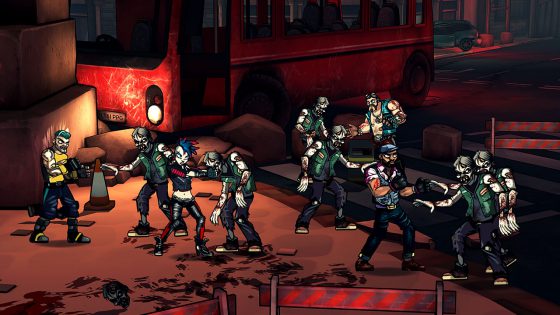 Headset wearers have camera control, allowing hidden paths and bonus pick-ups to be easily spotted. While accessible to all and sundry, these secrets are usually well hidden to those playing without a headset. A headset wearer on the team notably increases chances of survival, as youâ€™ll need every extra health-pack and 1UP you can find. Button bashing wonâ€™t get you far here.

This is a demanding game, make no mistake. Fail to dodge enemy attacks and make use of special moves and combos, then chances are youâ€™ll end up reaching a boss with just one life left. As good as dead, basically. Button bashing only cuts it during the opening stages â€“ if you donâ€™t have enemy attack patterns and the dodge manoeuvre licked after this point, youâ€™re in for a rough time.

Weâ€™d even go as far to say that Bloody Zombies isnâ€™t particularly fun without friends. There are far fewer zombies to deal with when playing on your lonesome, but even so, itâ€™s no walk in the park (ignoring the fact that one stage is set in a kidsâ€™ playground).

With a few friends or random online players though, Bloody Zombiesâ€™ tough difficulty level becomes more manageable and the game itself comes into its own. A higher player count doesnâ€™t automatically guarantee success, however â€“ you still need to familiar with the challenges that lie ahead. Sloppy players will soon find themselves with little to no health. Dead players can be revived, but only once.

A fresh set of extra lives is dished out at the end of each stage, and because progress is saved itâ€™s possible to host an online game starting at any stage previously beaten.

Aside VR integration, thereâ€™s a sprinkling of innovation elsewhere in the form of switchable colour-coded orbs that determine the skill set. Orbs can be levelled up by visiting seldom-seen shops, or purchased via the coins enemies occasionally drop. Upgrades are saved to a profile, and so over time, your character grows stronger and more adept. Itâ€™s a nice touch that adds a sense of progression. 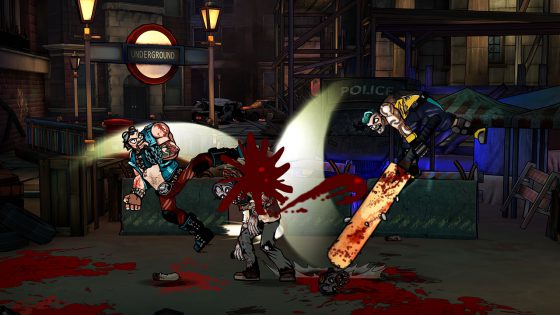 Bloody Zombies may be a little too tough for its own good, and the hit detection can be finicky, but itâ€™s still a well-designed experience. The combat nuanced and suitably crunchy, and the amount of undead folk to beat is surprisingly high with new enemy types frequently showing up. And while it does look rather last-gen for the most part, it isn’t without merit thanks to the sketchbook art direction.

It doesnâ€™t take itself all that seriously either â€“ the four playable characters come out with some sharp quips, and pre-stage conversations change depending on whom youâ€™re playing as. The fact that youâ€™re able to pick up a golden pigeon and put it on your head only illustrates the gameâ€™s silly streak further. This brassy birdbrain is linked to a trophy, challenging you to make it to the end of a stage with it still perched on your head.

You wouldnâ€™t head into a zombie-infested London on your own, and going into Bloody Zombies without a chum or two isnâ€™t advised either. Get a group together though, and youâ€™re almost certainly in for a good time. Master the dodge, learn the attack patterns, and catch that bloody pigeon.