The individual elements from each are easy to pinpoint. It brazenly borrows Super Marioâ€™s bonce bouncing, Trineâ€™s focus on character swapping, and Metal Slugâ€™s controllable vehicles. And of course, the prehistoric setting is lifted straight from Joe & Mac, rampaging giant dinosaurs and all. Weirdly though, Caveman Warriors doesnâ€™t feel like any of the games previously mentioned.

This is mostly due to the presence of a stamina bar. Each of the four characters has their own skill thatâ€™s often called upon to progress, and every time this skill is used, stamina reduces significantly. 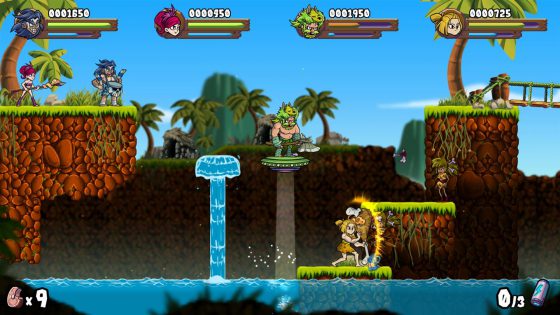 This has a huge impact on the pace overall. A good example: Liliana is the only character able to throw a projectile the full length of the screen. Itâ€™s by far the most useful skill of all, but only three spears can be thrown before the stamina bar is depleted. This makes it vital that every shot finds its target, or face the consequence of waiting a few seconds while your chosen caveman stops to mop their brow.

JanduSoft should have added ‘Ninja Gaiden’ to their list of inspirations

Mighty warrior Jack can lob axes and smash through walls, club-carrying Brienne has a bullet-absorbing shield, and the blue-haired shaman Moe has a pet monkey that can distract guards. These skills are all available from the outset but only come into play as things progress. This goes a long way to making each level feel suitably different from the last, never mind the fact that all eight stages have different settings, new enemies, and a boss to beat.

The two vehicular stages are remarkably different to one another as well, adding variety.

Developer JanduSoft should have added Ninja Gaiden to their list of inspirations, as that seriesâ€™ dreaded â€˜knock backâ€™ effect also rears its head here. For those unfamiliar, every hit taken causes the character to jolt back a few feet. This means if a projectile hits you, thereâ€™s a chance itâ€™ll catapult you back into an enemy, or â€“ worse still â€“ a bottomless pit. This is particularly frustrating during the stage set on a UFO (the plot entails aliens kidnapping the prehistoric palâ€™s children), due to its focus on precision platform jumping. JanduSoft seems to aware that this wayward mechanic may prove problematic as almost every defeated enemy drops a small health kit, refilling the bar by a smidgen. 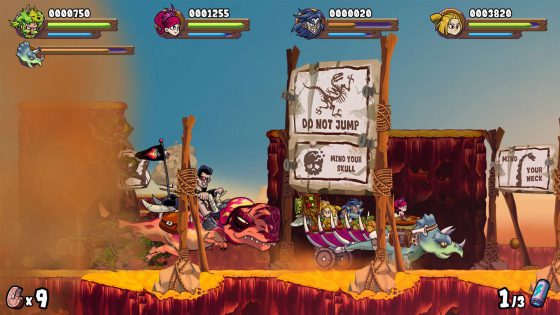 The structure is at least far more modern. No more than three extra lives are ever at your disposal, with stock replenished at every checkpoint â€“ a bonfire. No, we arenâ€™t about to make a Dark Souls comparison. Levels are long, usually lasting around ten minutes and taking several attempts to beat.

Itâ€™s the bosses that provide the stiffest challenge, however, with each having intricate attack patterns that take time to memorise. It doesnâ€™t help here that the final checkpoint before a boss often has a few enemies placed after it, meaning itâ€™s common to turn up to a boss battle with a less-than-full health bar. Ugh!

Going by screenshots and pre-release footage, we expected Caveman Warriors to be a fast-paced, arcade-like experience that can be breezed through in an hour or two. Instead, what weâ€™ve got here is a sporadically paced, occasionally fussy and undecidedly old skool platformer. While it did take us far longer than a couple of hours to finish â€“ and a good thing too, considering the Â£11.99 asking price â€“ the five-or-so hours it took werenâ€™t all smiles and sunshine. Unless you can rustle up a friend or two to join the prehistoric cause, donâ€™t expect much in the way of Jurassic larks here.