Destiny 2 managed to fend off all newcomers, holding the UK chartâ€™s top spot for a second week running. No surprise there, really â€“ Bungieâ€™s sci-fi opus is still the talk of the town.

The fact that NBA 2K18 outperformed PES 2018 does come as a surprise, however. 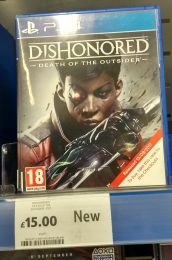 Take 2â€™s sports sim had the biggest ever UK launch for a basketball game, and its chart position (#2) is also the franchiseâ€™s highest so far.

The budget-priced Dishonored: Death of the Outsider made #6. Its arrival seems to have had a knock-on-effect on Dishonored 2, which fell from #6 to #20 this week.

The well-received Metroid: Samus Returns rolled in at #8, while also claiming no.1 in the 3DS chart.

Finally for this weekâ€™s new arrivals, NHL 18 turned up at #23. This means it was a no-show for EAâ€™s NBA Live 18. It even failed to break the individual format top 20s.

As for the whereabouts of recent releases, Mario + Rabbids Kingdom Battle is now at #14, Knack II plummeted to #25 on its second week of release, while Monster Hunter Stories on 3DS fell sixteen places to #37.