With a site revamp on the agenda, this weekâ€™s new release round-up features a new format. Itâ€™ll no doubt evolve slightly over the next few weeks, but hopefully, itâ€™ll prove to be easier to read as well as being more informative.

Best of all, this new format gives every new release an airing; no game left behind.

This week sees another slew of sports games, with NBA 2K18 and PES 2018 likely to storm the UK charts next week, while Samus makes a triumphant return on 3DS, along with accompanying amiibo.

Then we have Dishonored: Death of the Outsider. No reviews are live yet, but the Â£15-Â£20 price tag makes it less of a gamble, not to mention the seriesâ€™ solid reputation.

Hopefully it won’t be the last Dishonored game we ever see. 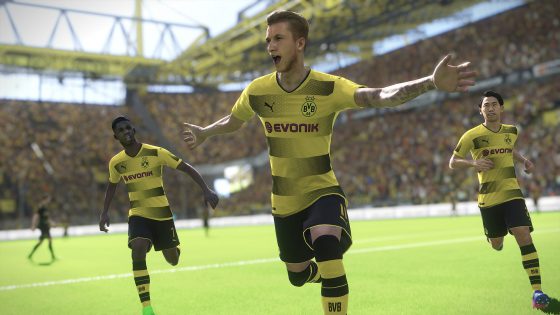 â€˜Where Legends Are Made’ encapsulates the return of PES, with new features, modes and an unparalleled gameplay experience. This year’s edition brings the biggest changes to the award winning series seen in a decade, which will set a new standard for soccer games, and raise expectations for the future of the franchise.

No part of PES 2018 has been left untouched, giving you new ways to play with a number of gameplay improvements, Online Co-op, Random Selection Match, and a complete presentation overhaul with lifelike player models, new menus and real player images.

PES 2018 embraces the world of eSports with new integration of PES League across Online modes, including a new 3v3 competitive mode allowing users to join forces to win big prizes. This, alongside bringing the PC version to a level that meets the quality standard of its PlayStation 4 counterpart, only scratches the surface of the significant changes to PES 2018

The highest rated* annual sports title of this console generation returns with NBA 2K18, featuring unparalleled authenticity and improvements on the court.

Dishonored Death of the Outsider (PS4/XO/PC)

Take on the role of Billie Lurk (aka Megan Foster), once one of Dunwall’s most notorious killers-for-hire. Reunited with your old mentor, the legendary assassin Daud, you undertake the greatest assassination ever conceived: killing the Outsider, a god-like figure whom Billie and Daud see as instrumental to some of the Empire’s most dishonorable moments.

As you venture deep into the grimiest corners of Karnaca to uncover the mystery of the Outsider and his origins, you will face deadly opposition, ancient powers, and difficult decisions that will forever change the world around you

NHL 18 delivers the speed, creativity and action of today’s young NHL superstars with new Creative Attack controls and an all-new Defensive Skill Stick. Play the fast-paced, arcade-inspired 3-on-3 NHL THREES mode, or create your own custom 32nd NHL team with the new Expansion Draft. Do it all with the most co-op and competitive multiplayer options ever in an EA SPORTS NHL game

NBA LIVE 18 introduces THE ONE, an all-new, dynamic career experience centered on your player, your choices and your legacy. Create your unique player identity and select a role on the court along with signature abilities and traits, only you can pull off. Embark on your quest to be the greatest basketball player on the planet in The League and The Streets with, or against other players in solo, co-op and multiplayer challenges delivered through LIVE Event content.

Dominate the court with innovative one-on-one gameplay arming you with an arsenal of all-new moves for each position with unprecedented control and responsiveness. Put your new-found skills to the test as you manage and build your favorite team in Franchise and Live Ultimate Team. Follow no one, Be The One

Ys returns with a brand new adventure for the first time in 8 years! Adol awakens shipwrecked and stranded on a cursed island. There, he and the other shipwrecked passengers he rescues form a village to challenge fearsome beasts and mysterious ruins on the isolated island. Amidst this, Adol begins to dream of a mysterious blue-haired maiden living in a unknown world. Join Adol as he unravels the riddle of the cursed isle and the blue-haired maiden Dana in Ys VIII: Lacrimosa of DANA!

Recruit mercenaries, find upgrades and build an indomitable army! Blackguards 2 offers an open, dynamic world map which changes according to your strategic decisions! A story with many twists, fateful decisions and more than 20 hours of challenging gameplay! Choose your spells, talents and skills wisely to shape your strategy on the battlefield! Tyrant or saint: On your path of vengeance, be a feared conqueror or merciful liberator

Baja: Edge of Control HD is the carefully remastered version of the original off-road racer from 2008 for Xbox 360 and PlayStation 3. This truly unique game contains more than 1,000 miles of the toughest terrain Mother Nature has to offer, including the steepest mountains, thickest mud and deepest canyons known to man.

Only the HD version features much crisper and more detailed visuals running at super smooth framerates in up to 4K screen resolution. With countless vehicles in eight different classes, including Trophy Trucks, 4x4s and buggies, Baja: Edge of Control HD features a full array of upgradeable options with authentic parts that affect each vehicle’s performance.

Players will put their off-road machines to the test in near-vertical Hill Climb challenges, head-to-head Open Class races, circuit races and the ultimate off-road endurance challenge: the Baja! Baja: Edge of Control HD contains more than 100 tracks across all landscapes in races that can last up to four hours. The game’s vehicle physics deliver unprecedented life-like handling, and a support management system that allows gamers to monitor and repair realistic vehicle damage as fenders fly, tires are blown, suspension is stressed and engines overheat

Rayman, Globox, and the Teensiest are off wandering through an enchanted forest when they discover a mysterious tent filled with a series of captivating paintings. As they look more closely, they notice each painting seems to tell the story of a mythical world. While focusing on a painting that shows a medieval land, they are suddenly sucked into the painting, entering the world, and the adventure begins. The gang must run, jump and fight their way through each world to save the day and discover the secrets of every legendary painting

Brave the hostile terrain of an alien planet teeming with vicious life forms as legendary bounty hunter Samus Aran. Her mission? Terminate the Metroid menace in this masterful reimagining of her 1992 Game Boy adventure 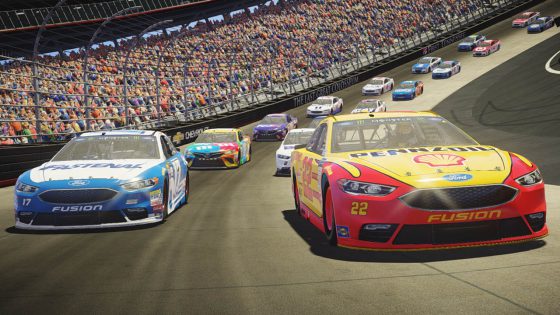 3 National NASCAR Series â€“ The NASCAR Camping World Truck Seriesâ„¢ and NASCAR XFINITY Seriesâ„¢ are playable for the first time in nearly a decade. Add in the Monster Energy NASCAR Cup Series and players have over 100 drivers to choose from.

New Split-Screen Multiplayer â€“ Two players can race together in head-to-head, local split-screen multi-player.
Deeper Career Mode â€“ Work your way through all 3 NASCAR national series in your own custom car or takeover a stock car from the top NASCAR race teams!

Expanded Online Gameplay â€“ 40-player online races are back! New this year and for the first time ever, complete the field with AI. New leaderboards, rolling seasons, online cautions, and the new NASCAR stage format create a robust online experience

Bloody Zombies is a co-op brawler designed to be played with both PlayStationÂ®4 & PlayStationÂ®VR players. Created for 1-4 players, fight the undead plague across the ruins of London using refined Free-Form Combat, taking down a terrifying variety of mutated zombies

MAIZE is what happens when two scientists misinterpret a memo from the U.S. Government and end up creating, uh, sentient corn. And did we mention the angry condescending Russian robotic teddy bear or the unhinged albino corn stalk with an underbite? Itâ€™s a lot to take in.

Locate and decipher clues while exploring an abandoned farm and a not-so-abandoned underground research facility. You may uncover a little something about yourself exploring the mysteries of MAIZE! Or not

Heralded as one of the most balanced fighting games ever created by SNK, SAMURAI SHODOWN V SPECIAL features a multitude of systems and mechanics to create a truly unique experience. Players have a wide variety of skills at their disposal, such as the ability to deflect attacks, catch an opponents weapon and disarm them, and the ability to temporarily slow down time to mount a comeback!

The most iconic additions this entry adds to the series are the character specific Overkill moves, which can be used to finish off an opponent in a variety of gruesome ways!

Planet of the Eyes (PS4/XO)

A finalist for ‘Best Indie Game’ at the Canadian Videogame Awards, Planet of the Eyes tells the tale of a service robot stranded on a mysterious planet. A stunning visual mix of puzzle and platforming challenges, an original musical score and fully voiced audio logs will sweep you away on the immersive journey of a lone robot in an unknown world

Time Recoil is a top-down shooter where you kill to slow time, experience amazing slow motion gunfights, and trigger spectacular special moves. Your mission is to save the world from Mr. Time, a time manipulating mad scientist turned evil dictator. Shoot, dodge, and dash through his evil empire guns blazing and unleash your super powers!

Discover now this unique mix of twin stick shooter and match-3 with its twisted mechanics and original story. Transcripted is a mixture of two incredibly addictive and vastly popular casual gaming styles: the dual-stick shooter and the match three puzzle game

The 1988-released Konami action game sees players progress through six levels as a character whose primary mode of attack is via his whip. He must battle through a variety of enemies, through which he can obtain new weapons, before reaching each stageâ€™s boss fights

Dreambreak is an adventure set in an alternative post cold war USSR. A quirky and unique mix of clashing gameplay genres. Get fingered for murder in Soviet Russia without actually going there!

The standalone multiplayer expansion of the uncompromising wilderness survival game, Don’t Starve: Giant Edition. Enter a strange and unexplored world full of strange creatures, dangers, and surprises. Cooperate with your friends in a private game, or take your chances with strangers online to survive the harsh environment, or strike out on your own.

Do whatever it takes, but most importantly, don’t starve.

Jettomero: Hero of the Universe (XO)

Play as Jettomero, a giant, indestructible, and incredibly clumsy robot determined to save the human race. Explore a procedurally generated universe by flying through space and landing on planets while trying not to destroy everything in your path.

With your brilliant robe and magic powers, itâ€™s time to build some Tricky Towers! Stack your bricks in this land of fable, whose marvelous tower will be the most stable? Cast magic to support your construction, and fend off dark spells to avoid destruction. Battle your friends and rise to fame, in this frantic physics party game.