The biggest compliment we can give Sonic Mania is that it feels like it was developed by a team who understands and loves the series more than SEGA themselves. SEGAâ€™s once proud mascot has lost his way over the years, and Sonicâ€™s sizeable fan base has seemingly taken it upon themselves to get the blue blur back on track. It was the fans who stuck by Sonic through thick and thin, the fans who insisted Sonic could be brilliant once more, and the fans that suggested that SEGA take the â€˜back to basicsâ€™ approach.

Sonic Mania is the work of one fan in particular â€“ Christian Whitehead. The Australian programmer did such a good job at converting Sonic CD to mobiles, thanks to his proprietary Retro Engine, that SEGA not only made the port official but also released it on Xbox 360 and PS3. Two more Sonic mobile conversions later, Christian was tasked with making a brand new Sonic game, working alongside Headcannon and PagodaWest Games â€“ two other indie studios.

Sonic Mania is a game both by and for the fans; a passion project that has clearly had countless hours lavished on it. This was the best possible move SEGA could have made, and itâ€™s the greatest thing to happen to Sonic in a long time. 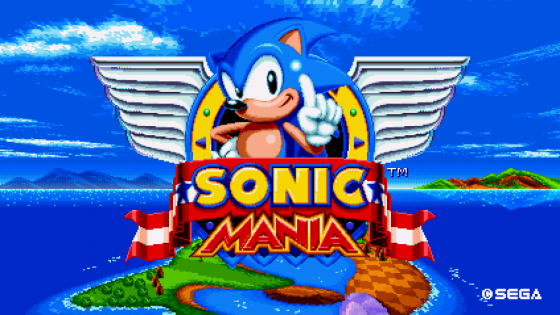 Itâ€™s a mixture of new and old, with classic reimagined levels alongside new. It starts off with a jaunt around good old Green Hill Zone, before propelling Sonic into Chemical Plant Zone a la Sonic 2. Itâ€™s here where the developers start to throw curve balls, with the constantly tight level design presenting dozens of unexpected moments. This trend continues to the very end â€“ familiar stages with new set-pieces intended to catch even long-time Sonic fans off guard. The result is a game that has far more personality than 2D Sonic games prior, chock full of memorable moments.

While itâ€™s arguable that the stage roster isnâ€™t going to be everybodyâ€™s taste (we would have swapped Oil Ocean for Hill Top, Aquatic Ruins, or Ice Cap Zone) Mania still ticks all the right boxes, with lava, underwater, snow, airborne, and whirling mechanical stages all present. New stage Studiopolis fills the Casino Night slot, complete with obligatory gambling machines, while Sonic 3â€™s Hydrocity is the gameâ€™s water stage. Many of the later stages are colossal in size, right to the point where on a few occasions the 10-minute time limit started to become a concern. 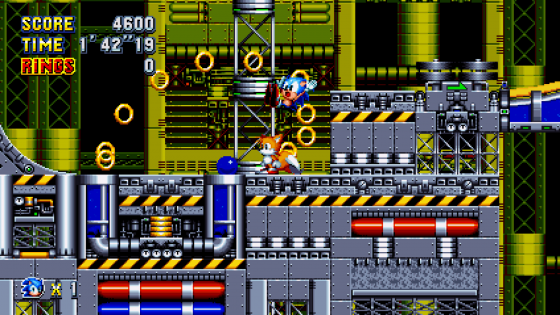 Every stage has a boss now, too. In most cases, the first boss â€“ one of Eggmanâ€™s robotic minions â€“ is a pushover, while the second puts up a much tougher fight. A couple of battles even require a degree of experimentation. Itâ€™s during boss battles that Tails comes into good use. His AI appears to have been tweaked ever-so slightly; instead of being a mindless drone, heâ€™s now much quicker off the mark when picking up loose rings. He still falls into spike pits often though. Thatâ€™s the life of a plucky sidekick, we guess.

Special stages are a mix of fresh and familiar likewise. Sonic 3â€™s â€˜Get Blue Spheresâ€™ stage is back and remains as tense as ever â€“ thereâ€™s no leeway for error whatsoever, and itâ€™s not long until the speed increases to breakneck. The â€˜UFO Chaseâ€™ special stages pay homage to Sonic CD meanwhile, only theyâ€™re in full 3D instead of faux Mode 7. Even the few 3D objects that feature hold nostalgic appeal due to being appropriately low-poly. As for the quality of the 2D art work, itâ€™s some of the best around. Every boss, badnik and bipedal mammal is as well drawn as the last. 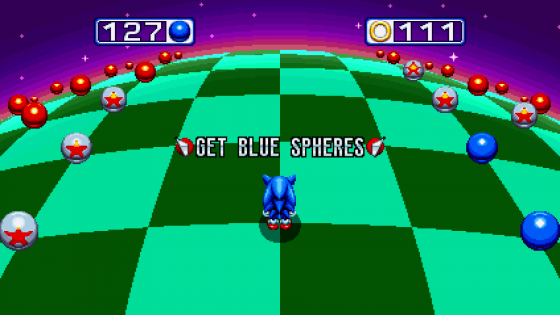 We came to Sonic Mania expecting it to be nothing more than a trip down memory lane with some fun new stages thrown in. While it certainly hits that mark, it goes way beyond that. This is a game that exceeds all expectations, being one of the best 2D platformers of recent times. The level design is constantly brilliant, every enemy is shrewdly placed â€“ theyâ€™ll catch you off guard, but never prompt you to swear â€“ and the bosses are both fun and creative. Thereâ€™s a seamless feel to the whole package too, thanks to the absence of loading screens.

Moreover, this is (whisper it) the first Sonic game with a smooth difficulty curve. Extra lives no longer flow freely, and as such feel more valuable. While they can still be found hidden within the stages, theyâ€™re often placed in precarious places. In fact, youâ€™re more likely to get a 1-UP from amassing 100 rings rather than by simply coming across an extra life box. Reaching a stageâ€™s boss with just one or two lives left isnâ€™t uncommon, particularly on the first playthrough. 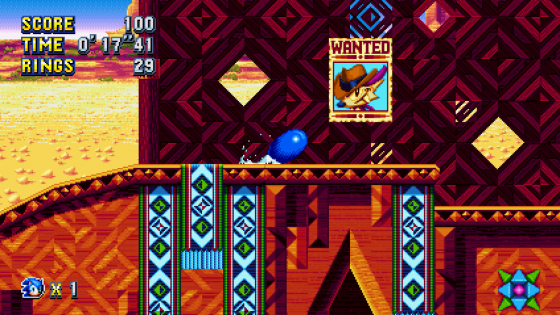 And unlike the later 2D Sonic games, upon losing your last life youâ€™re forced to start the whole act again, even if you made it to the second stage boss. This is a little annoying at times (Oil Oceanâ€™s boss is a pain) but it isnâ€™t game ruining. Stages have multiple paths, thus encourage through exploration, and retrying can provide another shot at bagging an elusive Chaos Emerald.

Collecting said gems isnâ€™t the only incentive for additional playthroughs â€“ thereâ€™s a wealth of bonus stuff to unlock, and Knucklesâ€™ stages vary slightly due to different starting locations. The time-trial mode, with online ranking, also gives reason to look for the fastest routes through a stage. This mode puts the new â€˜drop dashâ€™ move to good use, allowing a few precious seconds to be knocked off best times.

Sonic Mania is the result of an incredible amount of hard graft. If Christian Whitehead and his merry men set out to create the greatest Sonic game of all time, then we can safely say theyâ€™ve succeeded.