Donâ€™t come to this tower defence/role-playing hybrid expecting the unexpected. Although it does improve on its predecessor in many ways, innovation and originality are still low on the agenda.

Even if you overlooked the original, anybody whoâ€™s played a tower defence game before will know what theyâ€™re in for. Hordes of enemies appear out of magical gates and make a beeline to objects youâ€™re tasked with protecting, and so itâ€™s a case of strategically placing traps, turrets and towers in their path to prevent the battlefield being overrun and valuable items destroyed.

Enemies can be dealt with directly too, with the two free characters available being a knight in shining armour – who has some heavy hitting sword swings at his disposal – and a mage with a wand that fires different projectiles. The remaining character classes â€“ plus various character skins, pets, and whatnot – are locked behind a paywall, purchasable with IAPs or elusive gold medals. 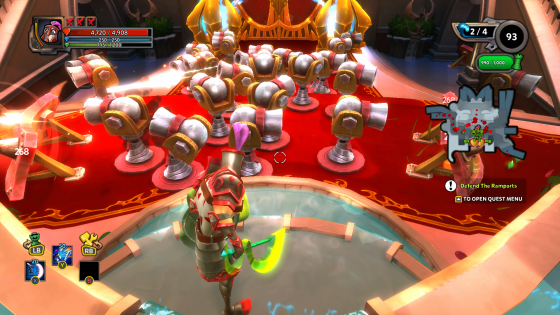 Itâ€™s more than apparent that Dungeon Defenders II benefits hugely from current-gen tech. The game engine copes admirably with the level of carnage and chaos, and although there is a limit to the amount of turrets that can be built, this is seemingly down to balancing rather than technical constraints. Glowing green crystals are used to buy, repair and upgrade arsenal, gained either from defeated enemies or from within treasure chests that restock between rounds. All the time in the world is provided to set up defences, as rounds only start when all players are ready.

The online component works incredibly well. Searching for matches, joining and hosting games via the hub overworldâ€™s War Table is effortless. Thatâ€™s to say, we didnâ€™t have trouble finding matches and didnâ€™t experience any technical issues such as pesky mid-game disconnections.

Thereâ€™s a rather lengthy campaign to play through thatâ€™s split into several chapters, with a boss battle and a story-expanding cut-scene at the end of each. The first couple of stages take place in small maps, as not to overwhelm while teaching the basics, and by around chapter three â€“ a few hours in â€“ the larger, more complex, maps start to appear. By this point, youâ€™ll need the help of a few fellow humans, although we should point out that the balancing does cater for those going in on their lonesome too. 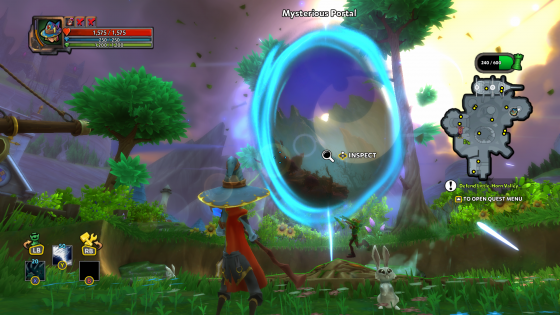 As for the role-playing elements, loot is rather forthcoming. Itâ€™s the usual assortment of new weapons, shields, armour, robes, boots, gauntlets and more, some of which can be bolstered with magic shards to improve stats. An impressive set of attire isnâ€™t required to progress early on but those in for the long haul, wishing to tackle the harder modes, will want to seek the best loot. This is commonly gained from the chests that appear at the end of each stage, and if youâ€™re lucky, you may receive a hatchable egg too. These can be nurtured and hatched when visiting the online hub, and each critter can cast a small amount of bonus damage.

Arguably, the focus isnâ€™t on looting and improving attack damage and defence via new items, but rather levelling up your heroes. Heroes are stored in a deck, and once theyâ€™ve reached max level (level 50 is the current cap) theyâ€™ll begin to bestow XP to other heroes when used. Around half the achievements are based around reaching max level with various heroes and causing a certain amount of damage via the turrets only purchasable characters use. While this may sound a little cheeky, Dungeon Defenders II is still one of the most enjoyable and accessible FTP games around, ignoring the fact that the multilayered menus are a tad confusing and messy at times.

While low on originality, Trendy Entertainmentâ€™s dungeon defending sequel knows how to show you a good time. It lets you get stuck into the good stuff with minimum fuss, and by the time the difficulty level rises youâ€™ll be well equipped to deal with the challenges ahead. No player is left behind, and this makes it an easy recommendation for all and sundry.