We get the impression that Aaero â€“ released back in April on PS4 and Xbox One â€“ passed a lot of gamers by despite arriving to excellent reviews. We only discovered it for ourselves a few weeks back, and now we have a good reason to talk about it – a trial version recently went live on Xbox One.

Itâ€™s well worth a download, especially for anybody on the fence or merely curious.

The trial offers 30 minutes of play, and although this may not sound particularly generous, itâ€™s still enough time to take in the tutorial, tackle a few stages and give the first boss a walloping. You should be able to squeeze half-a-dozen easy achievements out of it, too. 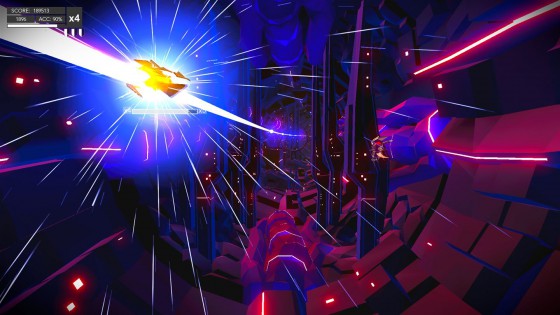 The spacecraft is twitchy to control, but purposely so, allowing you to instantly zip from one side of the screen to the other to follow the glowing rails that emit bass lines. The right analogue stick, meanwhile, is used to lock-on enemies before firing a barrage of missiles, hence the Rez comparison. Levels also have hidden objects to look out for, giving the incentive to return and achieve 100% completion rates.

Itâ€™s okay to arrive late to this party, as itâ€™s one hell ofâ€¦one.

Give it go, is what weâ€™re saying.