Due out across Europe on 29th September, it includes a heady mixture of 21 Nintendo classics and third-party hits, including the never-before-released Star Fox 2. 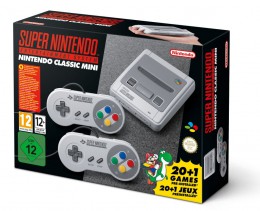 Curiously, Eurogamer notes that the once scrubbed sequel wonâ€™t be playable out of the box â€“ youâ€™ll need to complete the first mission in the original Star Fox (nÃ©e Starwing) to unlock it.

This could be Nintendoâ€™s way of devaluing it to â€˜unlockable extraâ€™ status, compensating for the fact that it may not be a 100% finished version. Weâ€™re speculating, of course, but locking one of the systemâ€™s most prolific games does strike us as an odd move.

Due to the inclusion of an extra controller, the price is a tad higher than the Nintendo Classic Mini: Nintendo Entertainment System. Currently, both GAME and Amazon has it listed for Â£79.99. An AC adaptor for the USB cable will be required, as this isnâ€™t included. 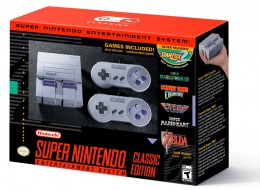 There isnâ€™t much ground for criticism when it comes to the line-up, save perhaps for such omissions as Axelay, Gradius III, Sim City and Final Fight. But let’s face it – was it never going to include every single SNES classic.

Itâ€™s interesting to note that weâ€™re receiving Contra 3, and not the sanitised Super Probotector. Speaking of regional differences, the US system is modelled on the boxier American SNES, purple buttons and all.

The US packaging promotes Star Fox 2â€™s inclusion heavily, while the European model opts for a standard stock image of Mario riding Yoshi. Also note the ’20+1 games’ banner, which further suggests Star Fox 2 is being treated as a bonus title.

We know itâ€™s a clichÃ© to say it, but we really do hope Nintendo produces enough stock to go around. We never managed to find a NES Classic Mini for a sensible price, and it’s looking increasingly likely that we never will.