Developer Digital Images did something unimaginable in November 1999 and released WipEout 2097 on the humble Amiga. A system best known for such 2D classics as Worms, Theme Park, Cannon Fodder and Sensible Soccer, three dimensional Amiga games were few and far between. They often veered on the ‘experimental’ side of things, too, guilty of pushing the ageing computer a little too hard. 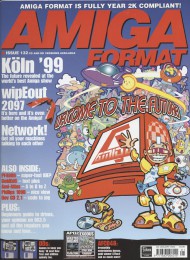 Heck, Commodore’s computer didn’t receive a conversion of DOOM until 1998, having to settle for the brazen imitator GLOOM until that point.

To put it into perspective further, by 1999 the Amiga hadn’t been considered a viable gaming platform for some time, with the last major commercial release being 1997’s Worms: The Director’s Cut.

Amiga magazines were – unbelievably – still around in 1999 though, mostly focusing on business software, with the game in question getting a mention on the cover of a late issue of Amiga Format.

This ambitious conversion was aimed at a small user base of extremely dedicated Amiga loyalists. A fan base with deep pockets, too. Based on the already-released PC version, WipEout 2097 required an Amiga 1200 (or better) with a PPC card, plus a CD-ROM drive, hard drive, 24MB RAM (minimum) and a 3D graphics card. This stuff didn’t come cheap.

It’s no surprise that this belated conversion (WipEout 3 had already been announced for PSone, and WipEout 2097 made it to the SEGA Saturn in September 1997 – two years prior) vanished without a trace, with copies rarely appearing on eBay. It’s not hard to imagine only a few thousand copies ever being produced. 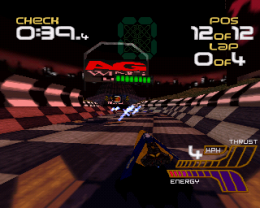 Was it worth the expenditure to get it up and running? The few reviews out there claim that it was a very impressive conversion, gaining a lofty 9/10 from Amiga Active magazine and 92% from Amiga Format.

Amiga Active’s criticisms essentially boiled down to two things: the controls and the soundtrack. Control options were limited (this YouTuber can be observed using one of the Amiga’s notoriously ‘clicky’ joysticks), while the soundtrack was comprised of compositions from Psygnosis’ in-house artists rather than licensed music. This was also the case for the PC and Saturn versions.

Amiga Active’s reviewer hoped WipEout 2097 would kickstart a wave of high-end Amiga releases. While the system did eventually receive incredibly belated conversions of Descent and Quake II – in 2001 and 2002 respectively – such thoughts can be chalked up as hopeful thinking.