A 2D side-scrolling racer with looping stages and minuscule sprites, SpeedRunners recalls Sonic 3â€™s oft-forgotten two-player mode. It plays by the rules of different retro classic, however â€“ Codemastersâ€™ legendary Micro Machines. The idea is to outrun other players, causing them to fall behind and become edged off the screen. We could’ve use Codemastersâ€™ own two-legged racer Micro Maniacs as an all-encompassing comparison here, but few seem to remember it.

Although the art-direction holds some appeal, with its swinging â€˜60s superhero vibe and all, SpeedRunners isnâ€™t much of a looker. Indeed, many scoffed when it was revealed as this monthâ€™s Xbox One â€˜Games with Goldâ€™ freebie. Spend just a few minutes with SpeedRunners though, and it quickly becomes that it’s impeccably designed. At a time where most multiplayer-focused games are shoved out the door and balanced and tinkered with in the weeks and months that come, it feels refreshing to play something that has clearly had countless hours of playtesting. 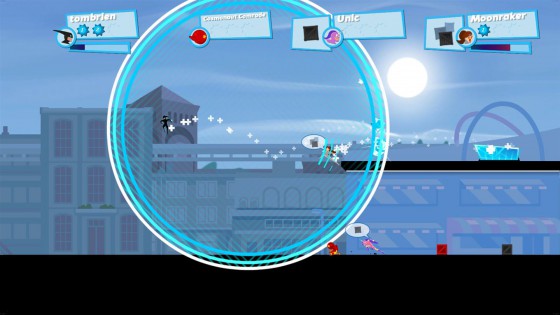 Thereâ€™s a surprisingly large assortment of stages, each as well-designed as the last. Theyâ€™re packed with ceilings to grapple onto, sharp bends, switches to flick â€“ which open and close alternative paths â€“ and obstacles to slide under. Knowing level layouts inside and out gives some advantage, especially when a well-timed ceiling grapple can propel you ahead of the pack, but with set-pieces relatively few itâ€™s still possible to come out on top when traversing a lesser-used, or completely unfamiliar, stage.

When playing online only the Metro Station stage prompts a jeer or two after being selected, with this being the opening stage used to teach the basics. In addition to a tutorial, thereâ€™s also a brief story mode to play through, lasting around an hour. As well as introducing the characters – which vary from a balding gentleman in a shark costume, to a bipedal, rifle-toting, deer – the story mode is generous with XP, getting you well on the way to unlocking new maps, weapons and ranked battles.

Weapons are just as intricately balanced as the stages, using a similar algorithm to Mario Kart. If youâ€™re falling behind youâ€™ll receive items to assist in catching up; if youâ€™re way out in front youâ€™ll get items to prevent others overtaking. Although few in number, the weapons are surprisingly nuanced, with numerous ways to counter-attack and defend. A shockwave will send a fireball back in the other direction, hopefully hitting whoever cast it, while grappling hooks can be deflected by dropping a crate just before itâ€™s about to latch on. And while devastating, the freeze ray takes a few seconds to charge, thus giving chance to get out of harmâ€™s way. 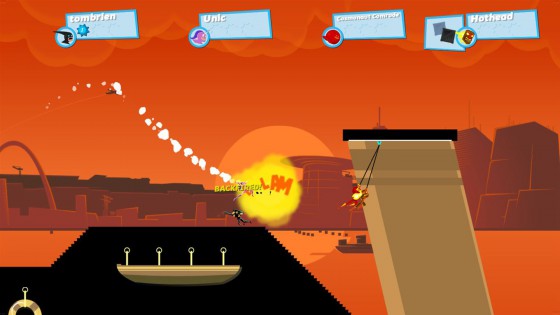 You donâ€™t have to look much further to find other examples of SpeedRunnersâ€™ excellent design. Itâ€™s possible to speed up a match if only CPU players are left, and if matches start to drag on for too long the screen size slowly begins to shrink until becoming postcard sized. The online component is handled well too, with matchmaking effortless and very little downtime between races. That said, the amount of XP gained at the end of a stage is rather stingy. Moreover, and outside of multiplayer, the CPU players can be predictable at times, swinging from ceilings perfectly and in tandem.

SpeedRunners is a perfect example of why we shouldnâ€™t judge on looks alone, and itâ€™s exactly the kind of thing Microsoft should be pushing as a â€˜Games with Goldâ€™ freebie â€“ an addictive and compelling multiplayer experience many would’ve overlooked if it wasnâ€™t free.