As was to be expected, it was a case of the former vastly outselling the latter â€“ Ultra SF II made #10 while Disaega 5: Complete settled for a lowly #36. 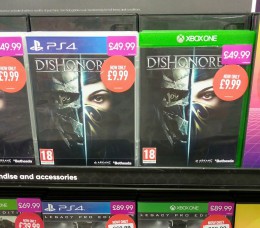 Arriving at #27, PS4/XO adventure RIME hardly set tills ringing either. We imagine it sold immeasurably better on the digital download services though, as is usually the case.

Going back to the top 10, Injustice 2 held the top spot for a second week running.

Blizzardâ€™s Overwatch had a good week too, shooting back up to #2 thanks to a price cut and the apparent popularity of recent â€˜free playâ€™ weekend.

Mario Kart 8 Deluxe held onto #6, Ghost Recon: Wildlands moved up one place to #7 and then at #8 Dishonored 2 makes a surprise re-appearance. The stealthy shooter received a significant price drop last week, currently available for Â£10 (or less) just about everywhere. Yes, even in GAME.

At #9 itâ€™s Zelda: Breath of the Wild, which means Nintendo has three Switch games in the top ten. Itâ€™s not all smiles, though â€“ Fire Emblem Echoes had a sluggish second week, falling from #5 to #26.

Sonyâ€™s PSVR shooter Farpoint dropped heavily too, falling all the way from #2 to #19.