Reviews for both went live earlier this week. We were expecting SFII to arrive in a blaze of glory, but the reception has been lukewarm at best with the high-price tag coming under fire. The Metacritic currently stands at 67% with only a handful of reviews awarding it anything higher than 7/10. 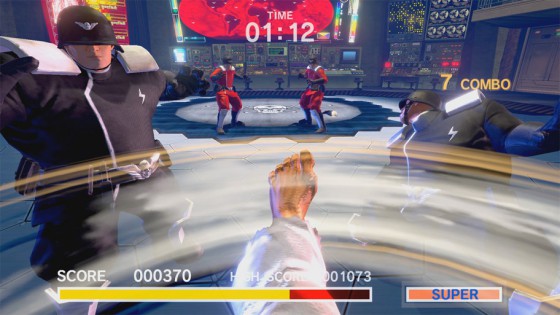 JRPG Disgaea 5: Complete seems to be going down far better, with a Metacritic of 84%, comprising of eight 9/10s. No reviews below 7/10 yet, in fact.

If SFIIâ€™s Â£34.99 price tag is hard to swallow, then there is a cheaper alternative â€“ ACA NeoGeo: King of Fighters â€™99 hit the eShop today for Â£6.29. This 2D brawler made it out onto such formats as the Dreamcast and PSone.

The ARMS Global Testpunch demo is now also available to download, ahead of the first testpunch – May 27th â€“ 28th. The second will be held from June 3rd â€“ 4th. Go, go, gadget arms!

Those still clinging to their Wii U have a new release to mull over â€“ Darksiders: Warmastered Edition (Â£14.99). If the PS4/XO versions are to go by, itâ€™s a commendable effort with notable improvements across the board.

The Wii U also gets VC releases of the GBAâ€™s Rayman Advance and Rayman 3, priced Â£6.29 each. Rayman Advance was a scaled-down conversion of the original Rayman, while Rayman 3 was a 2D companion to the 3D console release. We donâ€™t recall reviews of either being hugely favourable.

Next week: Harvest Moon: Skytree Village (3DS), and a handful of new indies, no doubt.