Even sites that focus squarely on retro gaming rarely talk about the Amigaâ€™s once bustling public domain scene. Talented bedroom coders took it upon themselves to show the world what the humble Amiga was capable of, creating free-to-share games as well as tech demos often accompanied by â€˜90s rave music.

Polybius feels like the modern-day equivalent of an Amiga PD game, possessing an incredibly modest â€˜handmadeâ€™ feel. The connection here is creator Jeff Minter was part of that scene back in the day. Chunky pixel font menus are just the tip of the ice burg – Polybius even has a credits screen thanking the local pubs and curry houses for their hospitality, along with a reminder that the whole shebang was made in a barn surrounded by sheep. 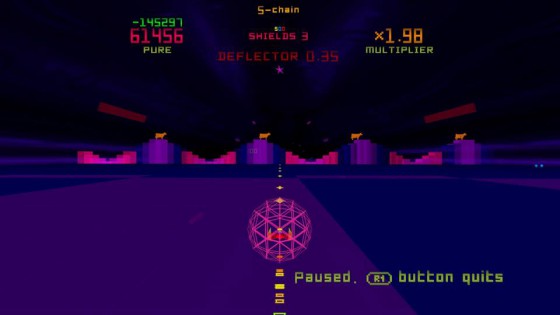 While the basic presentation could be mistaken as amateurish, itâ€™s clearly intentional â€“ Minterâ€™s inspiration comes from a fabled â€˜80 arcade game; a game so psychedelic that it gave players hallucinations, nausea and even amnesia. Thatâ€™s fabled in the sense that thereâ€™s no solid proof the original Polybius ever existed, putting it firmly into â€˜urban legendâ€™ status.

the modern-day equivalent of an Amiga PD game

Llamasoft has created a game befitting of that legend â€“ a wonderfully vivid shooter that moves like greased lightning, complete with a barnstorming soundtrack worth cranking the volume up for. While we canâ€™t vouch for the VR mode, not having tried it for ourselves, Llamasoft claims it has been designed to avoid giving players motion sickness.

The control system appears to have been kept purposely simple for VR play too, using a single button. Considering this simplicity, it may come as a surprise to find that thereâ€™s a learning curve. The opening stage prompts you to â€œDo what comes naturallyâ€ but itâ€™s less about acting instinctively and more about finding your own flow. The gorgeously gaudy stages are littered with gates that increase the speed of the X-Wing style spacecraft significantly. As tempting as it is to storm through a stage as quickly as possible, itâ€™s often best to take things slow to deal with the enemies ahead, using the valuable seconds provided to manoeuvre out of harmâ€™s way. Choose to go full throttle, and those valuable seconds become valuable split seconds. 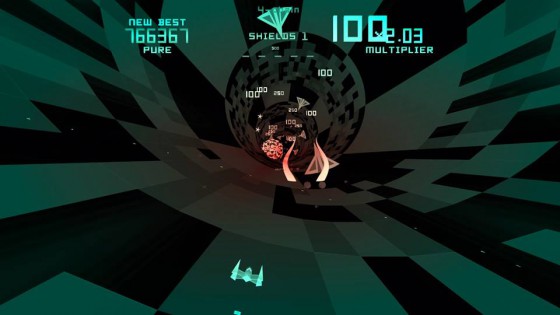 Although gates do change colour to indicate that youâ€™re in position to pass through safely, theyâ€™re still tricky to navigate through at first. Eventually, though, youâ€™ll learn how to judge whether to risk whizzing through gates or to give them wide berth. This leaves you able to focus on destroying enemy waves, with rewards dished out for a 100% success rate. There are cows to shoot, fried eggs to fry, and plenty of other things to concentrate on as well. Itâ€™s a very demanding shooter.

a culmination of Llamasoftâ€™s finest

And a varied one, at that. Minter has clearly taken on board criticism that past works have drawn too heavily from Tempest, and so Polybius features stages notably different from the last. Tunnels, tubes, half pipes, slalom runs with colour coded flags, flat planes that seemingly go on forever â€“ the desire to find out what the next level has in store makes Polybius feverishly addictive.

The music also plays a part in this, with tracks changing every few levels. It speaks volumes of a soundtrackâ€™s quality when you want to keep playing just to listen to the music. Fortunately, the previously mentioned credits screen also has a jukebox option. Each of the three modes has its own opening musical score, helping to give each a slightly stronger identity. 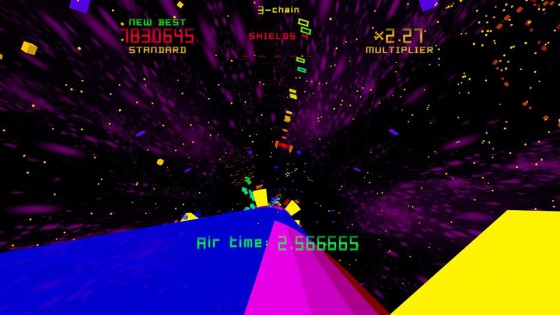 Pure mode is intended for score chasers, starting with level 1 each time and a surprisingly generous amount of bonus shields (read: lives) thrown your way at the end of each level. YOLO is similar, but instead of bonus shields youâ€™re given 9 from the outset and thatâ€™s your lot.

Then thereâ€™s classic mode. It follows the same format as Space Giraffe, allowing you to restart stages using your personal best score. The beauty of classic mode is that you can go back and practise tougher stages, or restart from a point where shields were in ample supply. Some levels are far trickier than others â€“ level 13, with its barriers that must be boosted over, is particularly bothersome â€“ and so this mode is especially good learning how to overcome such obstacles. Of course, the ability to pick up where you left off shouldnâ€™t be overlooked either. 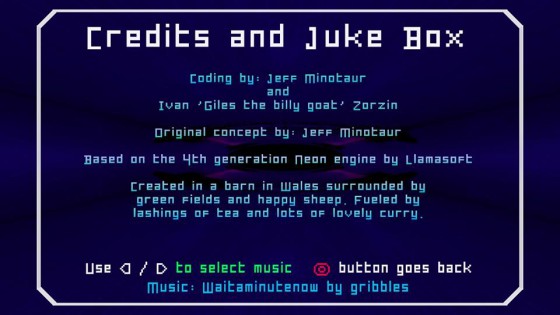 Progressing to level 50 isnâ€™t plain sailing â€“ itâ€™s common to breeze through 3-4 stages in quick succession, and then hit a brick wall on the next â€“ but itâ€™s rarely punishing. This is a game intended to delight rather than frustrate, guaranteed to put you firmly â€˜in the zoneâ€™ within mere minutes of picking up the joypad. Along the way, youâ€™ll be treated to near countless in-jokes, from 80â€™s arcade game references to subliminal messages drenched in British humour. We also appreciate the use of vintage sound effects, helping to add an extra dollop of nostalgia.

Indeed, Polybius is a culmination of Llamasoftâ€™s finest â€“ from the days of the Amiga to the Atari-bothering TxK – with extra retro flair thrown in for good measure. A modern-day version of an arcade game that never was, delivered with an unwavering air of confidence.