10tonsâ€™ Spellspire bears more than a passing resemblance to Letter Quest, another word game with light RPG elements. Weâ€™re all for expanding niche markets, but now weâ€™re in the position where the only two word games available on PS4 and Xbox One arenâ€™t massively different from one another.

Thereâ€™s also the small matter of the fact that Letter Quest was recently free via PS Plus; anybody with an inkling to play a word game on their PS4 probably picked it up when it cost sweet nothing.

Spellspire is at least competently put together, and it does have a few subtle differences. The core concept remains unchanged, however. The main character slowly plods through dungeon rooms, stopping to battle every monster in their path. The longer the word youâ€™re able to find within the ten-letter word grid, the more damage dealt to the opposition. Stages are short, usually lasting just a couple of minutes, and every so often thereâ€™s a boss with an elongated health bar to whittle down. 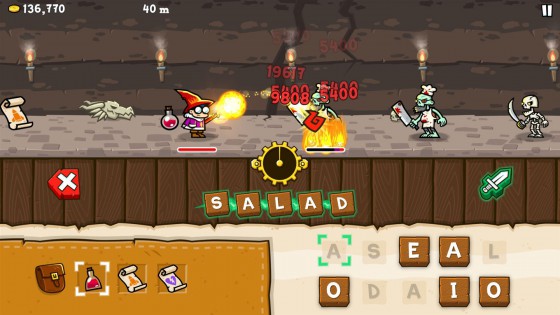 Between stages itâ€™s possible to spend any gold acquired on new weapons and armour, with some items featuring elemental effects. In Spellspireâ€™s case, youâ€™re forced to replay levels over again to earn a star â€“ the more stars you have, the more items available to purchase. Cloaks, magic wands, and wizard hats, specifically â€“ the main character is an apprentice wizard, out to find what lies on the 100th floor of a monster-filled tower.

Spellspire not only has a smaller pool of letters than Letter Quest, but they also arenâ€™t replaced after being used. Itâ€™s a simple case of finding enough words in the same static grid to be able to defeat every monster within the stage. Although word grids change when retrying a failed level, every now and then youâ€™ll come across a grid youâ€™ve seen before. 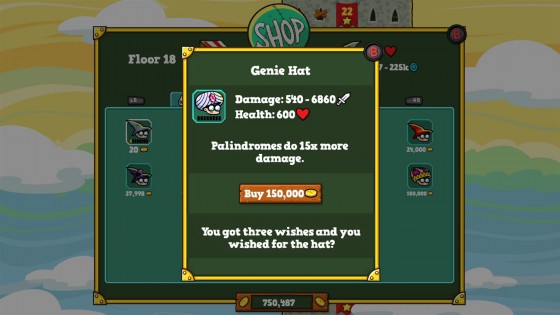 To make things even easier, at least until the difficulty level rises significantly around the halfway mark, both singular and plural iterations of the same word can be used. If thereâ€™s an â€˜Sâ€™ in the word grid â€“ and there usually is â€“ you can blitz your way through a stage effortlessly. Handily, the last word used can be brought up at a push of a button – a feature that proves highly useful when adding and removing letters to make a â€œnewâ€ word.

Spellspire is definitely simplistic in design – as is the case for most of 10tonsâ€™ back catalogue – but itâ€™s still an elegantly nuanced experience. Monsters come in different sizes, so itâ€™s wise to use simple three and four letter words to defeat the standard skeletons and such while reserving longer words for stronger enemies. Keeping a word or two back for the final enemy is advised, too – most deaths come from struggling to find words when reaching the end of the stage, long after youâ€™ve blitz through those immediately obvious. 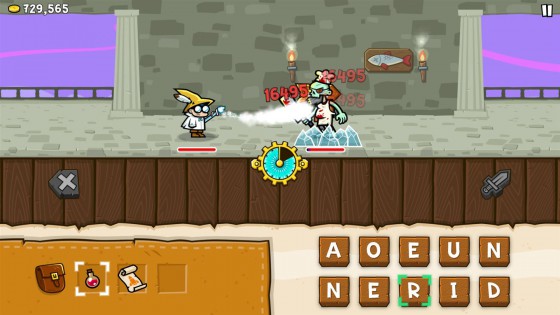 Boss stages are appropriately challenging, but if you replay past stages and return with a new wand and upgraded armour, youâ€™ll eventually prevail. Once beaten, bosses then appear in the standard monster roster alongside the common dungeon folk.

In terms of presentation, Spellspire is bright and colourful and has the same uniform look to it as the developerâ€™s previous works, menu fonts and all. Sharp but unspectacular. Music meanwhile sounds uncannily like the original Plants vs. Zombies, so thereâ€™s also open grounds to cry plagiarism there.

Ultimately, this is the gameâ€™s biggest problem â€“ itâ€™s too similar to other, already well-established, products. 10tons are clearly keen to break into the big leagues, and while theyâ€™ve had some mild success so far, itâ€™s time for them to draw on their on inspirations. Or at the very least, look a little further afield for genres with untapped potential.