A low asking price isnâ€™t the selling point it once was. Indeed, itâ€™s unlikely even the thriftiest of gamers find themselves stuck for something new to play nowadays. Digital sales see some hefty price drops, both Xbox One and PS4 have amassed a wealth of free-to-play games over the years, and weâ€™re sure most gamers have an unplayed PS Plus/Xbox Gold freebie or two in their digital library.

Fortunately, Demonâ€™s Crystals has other merits beyond its meagre Â£3.99 price tag. This instantly gratifying twin-stick shooter is surprisingly generous with content, including several four-player multiplayer match types as well as survival and arcade modes. In arcade mode, each stage is noticeably different from the last with areas varying wildly in size, and a colossal boss lies at the end of each world.

Itâ€™s a surprisingly comprehensive package, with the only telling signs of a low budget being muddy last-gen quality visuals and a lack of online play. 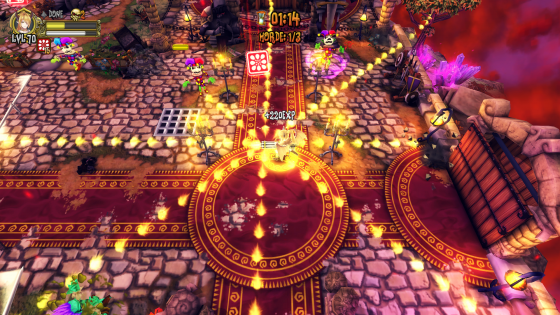 The developers have been a bit frugal when it comes to artwork though, as there are heavy inspirations from Capcomâ€™s back catalogue. The demonic female leads resemble Darkstalkers characters, and weâ€™re pretty sure the menus use the same font as Ghouls â€˜n Ghosts.

With an enemy roster comprising of cartoon-like zombies, undead knights, ghosts and other supernatural beings, Capcomâ€™s ghoulish arcade classic is easily the biggest influence. The amusing thing here is that Ghosts ‘n Goblinsâ€™ hirsute hero did once star in a top-down shooter â€“ Arthur was a playable character in Cannon Spike on Dreamcast.

Unlike most twin-stick shooters, Demonâ€™s Crystals isnâ€™t just about defeating waves of enemies. It doesnâ€™t even have definable waves â€“ enemies keep spawning until youâ€™ve killed enough to meet criteria. Every level has a crystal gathering stage too, in which a rather lenient time limit is in place.

Most deaths – at least early on – arenâ€™t caused by the time-limit expiring but rather by taking too much damage. Sometimes it seems impossible to avoid taking a hit or two, and this is easily the gameâ€™s biggest fault. 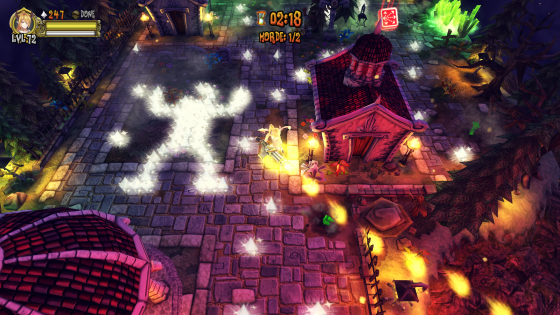 The absence of a block or evade button isnâ€™t the problem here, but rather the fact that this isnâ€™t a particularly â€˜pureâ€™ shooter. From gravestones to trees, thereâ€™s a lot of clutter in the environments to accidentally catch yourself on. Enemies can also become obscured behind buildings, and their attack patterns can prove unpredictable. The colourful jesters in the castle world are particularly bothersome, throwing multiple playing cards all over the place.

During later levels, itâ€™s wiser to stand your ground and make do with the standard weapon then go out in the pursuit of power-ups. Not that you usually have to travel far for a pick-up or two to spawn â€“ theyâ€™re strewn about generously, bolstering firepower to absurd levels. Bolts of lightning and fire storms fill the void left by the absence of a â€˜smart bombâ€™ meanwhile.

Demonâ€™s Crystals isnâ€™t perfect, but itâ€™s still a decent little shooter that goes way beyond the call of duty. Itâ€™s substantial enough to hold interest for the 2-3 hours it takes to beat the arcade mode, and if you can get some friends together youâ€™ll probably be able to squeeze a couple of eveningâ€™s worth of entertainment out of it too.