Years ago, we ran a feature titled â€˜Conversion for Conversionâ€™s Sakeâ€™ looking at various games converted to consoles unfit for the task at hand. It appears to have been lost in the great Games Asylum content purge of 2005, but if memory serves a lot of GBA games were on the list including Konamiâ€™s Silent Scope. A light-gun game on a handheld, minus its famous sniper rifle peripheral? Thatâ€™s a case of conversion for conversionâ€™s sake right there.

Nowadays consoles boast similar hardware, and as such can handle whatever developers throw at them. Gone are the days of underpowered handhelds, hard to program consoles, two-button joypads and such; there is no specialist hardware out there, save perhaps for VR headsets. This poses a potential problem should we ever want to compile a new list of bizarre choices for unconventional conversions, but rest assured that the free-to-play Fallout Shelter would make the cut. The Xbox One version from earlier this year, specifically. 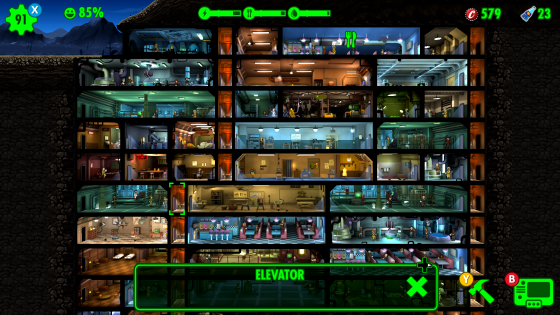 Fallout Shelter achieved great things on mobile, topping mobile charts and helping to introduce a new pool of gamers to Bethesdaâ€™s mega franchise. That was back in 2015, so you can imagine that the belated Xbox One/Windows 10 release came as quite the surprise. The Fallout 4 train had been and gone. Falloutâ€™s popularity certainly hasnâ€™t waned over time, however, with new pieces of merchandise appearing regularly, and new copies of Fallout 4 still easily found.

In short, itâ€™s not hard to see why Fallout Shelter ended up on Xbox One. Is it a good fit for the console? Not really, no. For those unaware or unable to guess, Fallout Shelter involves managing your very own vault. Itâ€™s your typical FTP mobile game and all that it entails, complete with resources to collect, a focus on building and expanding, and a premium currency thatâ€™s used to avoid waiting for time to pass.

Although thereâ€™s an emphasis on keeping your vault dwellers happy, this is neither a time consuming or involving task. Simply place vault folk in the right line of work â€“ including food, water, and energy production â€“ and theyâ€™ll go about their business without a care in the world. 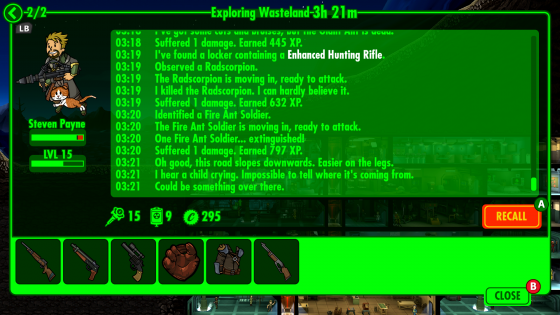 The idea is â€“ or perhaps was – to load it up every few hours and collect resources, assign any new dwellers that turn up on your huge metal doorstep, and maybe build a room or two. Generally I only get to play Xbox during the evening, and thatâ€™s the first problem here: itâ€™s a mobile game on the least mobile console ever made, and so Iâ€™m limited to around one vault visit a day.

Fortunately, there’s no major punishment for staying away for too long. Moreover, hazards only occur within the vault (fires, raider attacks, etc) when the game is being played, for want of a better word. See, there’s isn’t all that much to Fallout Shelter. Even when embarking on a mission, interactions are restricted to choosing what rooms your intrepid adventurers head to next. They need healing occasionally, and every now and then thereâ€™s a dialogue choice to make, but thatâ€™s about it.

Upon approaching the 50-dweller mark â€“ with 100 dwellers required to unlock the last available room â€“ I started playing Fallout Shelter on a laptop, carrying over progress via Xbox Play Anywhere. Using the mouse to mop up resources and drag and drop dwellers into different rooms made for a far more fluid experience. 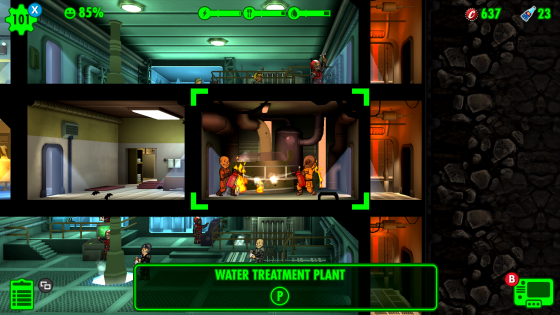 I even found it hard going back to playing it on Xbox One, due to the clunky joypad controls. Selecting individual dwellers in the Xbox One iteration is a pain, requiring you to cycle through all dwellers within a room, and almost every input requires a push of the â€˜Bâ€™ button to back out of menus. On PC, one click is all you need for everything. Again, this only enforces the fact that the Xbox wasnâ€™t the best host for Fallout Shelter.

Itâ€™s far from a terrible experience â€“ itâ€™s one of the better FTP games on the console, in fact – but itâ€™s still the worst version out there, with added insult to injury being that itâ€™s such a simple game.

It doesnâ€™t look like there are any concrete figures out there, but Iâ€™m going to go ahead and assume that Xbox One players have blown more money on IAPs than those only playing it on Windows 10. Itâ€™s a game that suits the Xbox One demographic, and itâ€™s for that reason it unlikely to be the last unconventional mobile conversion the console sees.

Perhaps we should just be grateful Activision has lost all interest in bringing the Angry Birds games to consoles.