Those who canâ€™t tolerate questions being left unanswered will doubtlessly find Little Nightmares problematic. This eerie puzzle-platformer provides lots of thought provoking moments, but by the time the ending credits roll youâ€™ll no doubt be left with a dozen unanswered questions. Set in a nightmarish realm, itâ€™s very much an experience left open to your own interpretations.

Some explanations wouldnâ€™t have gone amiss, certainly. Thereâ€™s no plot to speak of; no dialogue, cut-scenes, or inner monologues. Outside of an achievement pop-up, the heroineâ€™s name isnâ€™t even muttered once. The only reason we know theyâ€™re referred to as â€˜Sixâ€™ is because itâ€™s mentioned on the back of the gameâ€™s box. Haunted by an image of a stern-looking woman, itâ€™s clear that Six is trapped in a dark and sinister place from which she must escape. You learn more about the Sixâ€™s confines and her captors through natural progression, but she remains an enigma throughout. 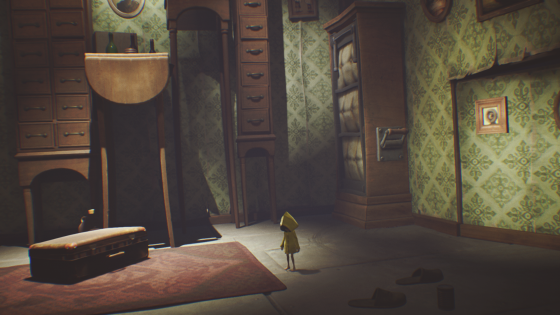 Small in size and stature, Six has no means of defence and carries just a cigarette lighter to assist in her quest. This is used solely to light up dark areas, rather than to set objects ablaze. She also can grab small objects and climb over short obstacles but is otherwise dwarfed by the world of giants around her. Although Sixâ€™s animation is mostly impressive, she doesnâ€™t show much in the way of emotion due to her face being cloaked by her bright yellow rain jacket.

There is a minor attempt at character development, mind. Little Nightmareâ€™s original name was â€˜Hungerâ€™ and this theme still plays a key role, with Six occasionally becoming so ravenous she falls to the ground while clutching her stomach. As time progresses, her hunger grows. This theme is evident elsewhere, with one standout moment taking place in a kitchen inhabited by two unnervingly grotesque chefs. Itâ€™s apparent a lot of time was spend perfecting their AI routines and watching them bumble around as they try to pinpoint Sixâ€™s whereabouts is oddly hypnotic. 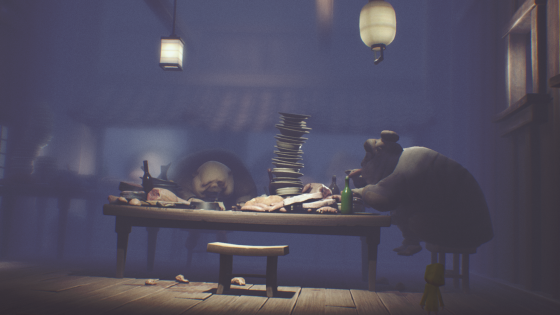 This kitchen scene takes place during the third chapter, and sadly itâ€™s where the game peaks. The remaining two chapters are full of trial-and-error stealth sections and chase scenes that are little more than memory tests. Indeed, Little Nightmares isnâ€™t anywhere near as clever as its disturbingly vivid exterior. As something clearly intended to appeal to fans of Limbo, Inside, Oxenfree and (possibly) Unravel, it borrows from its peers far too heavily.

A puzzle involving weighing down a physics-enabled seesaw to keep it upright had us rolling our eyes. Such tasks as opening draws on a filing cabinet to create a makeshift staircase and swinging on a rope to gain momentum feel less like puzzles and more like mere obstacles. Or to be blunter, ideas weâ€™ve seen dozens of times before.

Thereâ€™s also an instance where Six becomes trapped in a cage and must break free by rocking it back and forth until it topples over. Itâ€™s uncannily similar to a section in Another World (aka Out of this World) â€“ a twenty-six-year-old game. We doubt it was meant to be an homage. 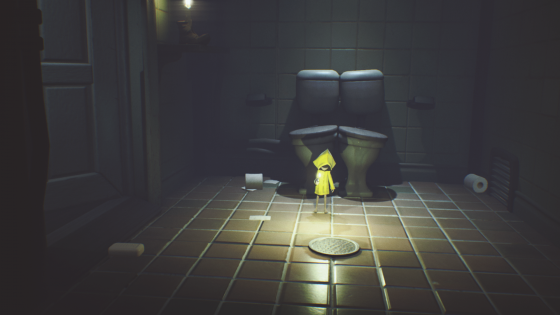 There just no shaking that feeling that after being picked up by Bandai-Namco, developer Tarsier lost track of their original focus. Itâ€™s an experience thatâ€™s visually sublime â€“ right to the point where itâ€™s common to stop and gawk â€“ but distinctly lacking in challenge.

The focus on self-discovery in the opening chapter is pleasing, not even going as far to explain that there are three different kinds of collectables. But after Six finds her feet in the second chapter and confronts the chefs in the third, the sense of self-discovery and wonderment is lost, and itâ€™s all downhill from there. It certainly becomes weirder though, weâ€™ll give it that.

For all its intrigue and mystery, itâ€™s yet another one-run-and-done 4-5-hour adventure that offers no reason to return other than to mop up collectables. Maybe Tarsier found themselves pushed for time, or perhaps budget hampered their original ambitions. Again, more questions weâ€™ll never know the answer to. The fact that it feels like a chapter (or two) is missing suggests something wayward occurred during development, and thatâ€™s a real pity.