The first two Wonder Boy games were intended to be coin guzzlers, ushering arcade players along with haste and a sense of urgency. A simple case of hot-footing it from one level to the next before the time limit was up, with no time to stop and explore.

It wasnâ€™t until the third Wonder Boy that SEGAâ€™s also-ran mascot – bested by Alex Kidd â€“ broke free of its arcade shackles, starring in a console-only adventure that was well ahead of its time. So far ahead, in fact, that its open-ended nature is often mimicked by the indie adventures of today. Itâ€™s an ideal candidate for a remake.

Although it wasnâ€™t referred to it at the time, least not that we can recall, The Dragonâ€™s Trap was the Master Systemâ€™s answer to Metroid. A quaint village acts as a hub, and from there branching paths can be found â€“ both above and below ground â€“ that lead to new areas, each of which requires a certain skill to access. Unlike Metroid however, these skills donâ€™t come in the form of weapon and armour upgrades but rather new creature transformations. 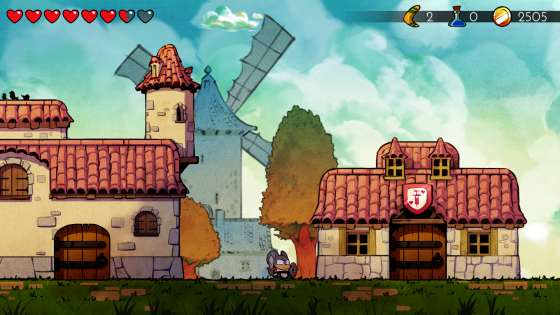 During the game’s opening, a curse (the titular trap, no less) turns Wonder Boy – or newcomer Wonder Girl, if you prefer â€“ into a fire-breathing lizard. The only way to break the curse and become human, sorry Hu-Man, again it is to take down a hierarchy of dragons, gaining a new transformation each time.

Thereâ€™s a slight learning curve as Wonder Person builds up momentum as they run. As such, itâ€™s quite easy to accidentally collide into enemies early on, while sword strikes often miss their mark. Once acquainted with the inability to stop on a dime though, death doesnâ€™t come quite as quickly.

Enemy attack patterns and their static locations also quickly become consigned to memory, and so with each attempt, itâ€™s likely youâ€™ll get that little bit further. Every now and then itâ€™ll throw you an unexpected â€“ and sometimes much needed – lifeline too, be it a full health recharge power-up or a blue potion that grants a second life.

Little in the way of progress is lost upon dying either, as any gold collected is retained. This is used to purchase new swords, shields and armour. The Dragonâ€™s Trap wasnâ€™t just ahead of its time due to being non-linear â€“ it had RPG elements too, with new items boosting stats and such. 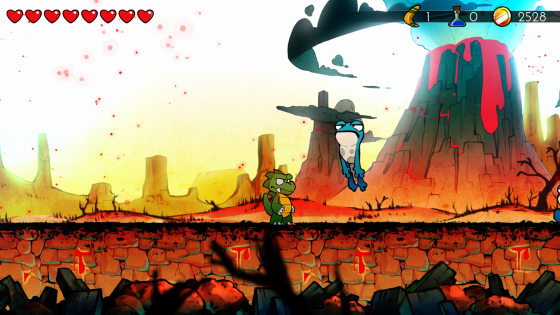 After a couple of bosses have been defeated, and the health bar has been extended by a couple of hearts, the experience becomes rather easy going. Enemy attacks no longer drain half heart container but just a smidgen, while foes that once took two of three hits can be vanquished with one hit.

Rest assured though that the difficulty level ramps up again towards the end, including a dojo stage with some pesky ninjas to deal with. You may have to grind for gold and items before taking on the final boss as well, further highlighting the gameâ€™s non-linearity. Fortunately, Hawk-Manâ€™s ability to fly makes revisiting past stages effortless, ignoring the fact that the feathered fellow canâ€™t swim. Youâ€™ll need Piranha-Man to take to the seas, with his stage taking the form of a haunted pirate ship.

Youâ€™ll soon learn to make mental notes of where inaccessible areas are, as well as the locations of shops with items out of your price range. The rewards for backtracking through past levels are usually worth it, adding a few secondary items (whirlwinds, fireballs, lightning bolts, etc) to your arsenal along with a hefty wad of cash. 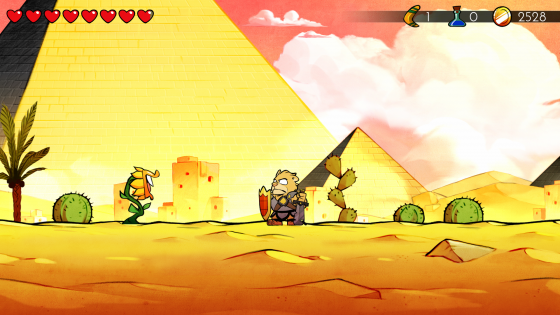 In order to prevent aimless wandering, developer Lizardcube has added a new feature: the infamous cigarette smoking pig who once dished out passwords now provides a helpful hint as to where to go next. Incidentally, old passwords can still be used should you have any scribbled down in an old notepad or â€“ heaven forbid â€“ scrawled over the pages of the original gameâ€™s instruction manual. You absolute monster.

It should be clear by now that this is a genuine labour of love. Itâ€™s a remake is as slick and polished as they come, boasting surprisingly lavish production values including an instrumental musical score. The HD visuals are superbly drawn, full of character while retaining faithful similarities to its 8-bit counterpart, while the backdrops are busier and consequently feel more alive. The natural lighting/shadow effects are equally pleasing. 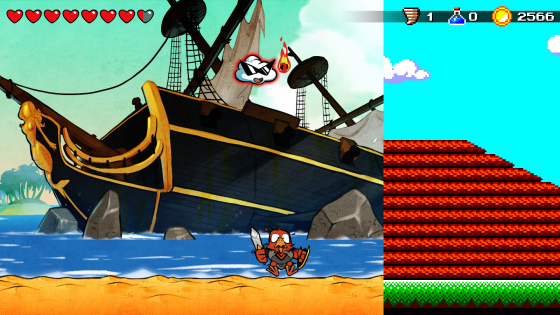 Itâ€™s even possible to swap between old and new visuals at the push of a button, complete with an elegant screen wipe. Or if you fancy getting only semi-nostalgic, the option is also there to play with new visuals and vintage music. Itâ€™s a neat addition implemented superbly. Presentation impresses elsewhere too, with an appealing UI, seamless auto-saving and unlockable artwork galleries.

While itâ€™s likely that those experienced with The Dragonâ€™s Trap will breeze through it quite quickly – which does, unfortunately, make the Â£15.99 asking price a tad hard to swallow – thereâ€™s no denying that the bar has been raised for all future remakes.

From its eventful opening to its melancholy ending, itâ€™s clear Lizardcube had the utmost respect for the source material. Weâ€™re already eagerly awaiting news on what the talented team has planned next.