In an attempt to give this Kickstarter-funded RPG its own identity, French indie developer Enigami has shunned convention. This isnâ€™t your everyday RPG; itâ€™s a condensed role-player, with a 25-hour runtime and arena-based beatâ€™em up combat featuring combos and special moves. An intriguing prospect, but much like the protagonist’s backstory â€“ Chado and Poky crash their airship in an inhospitable realm after fleeing a war zone â€“ itâ€™s a bumpy ride.

Although itâ€™s true that most RPGs donâ€™t get going until around 10 hours in, few have a rougher opening than Shiness. Over the course of around 3 hours, the plot is outlined, the two main characters introduced, the battle system explained â€“ and then expanded upon â€“ another character joins the team, and the workings of the magic (Shi) system are detailed. All the while thereâ€™s the gameâ€™s bizarre lexicon to wrap your head around, otherworldly curse words and all.

On top of all that, the puzzle solving mechanics soon come into play, with each of the five characters that eventually join the team having a unique skill usable outside of combat. Chado, the hot-headed hero burdened by the passing of his mother, can conjure up and throw large boulders. The timid Poky can connect glowing crystals using a magical wrench meanwhile. Heâ€™s your typical â€˜comic reliefâ€™ character, scared of everything and constantly thinking about food. They’re soon joined by Kayenne, a mighty bipedal wolf who has the power of telekinesis. Although the cutesy art direction will always remain an acquired taste, the characters quickly grow likeable. 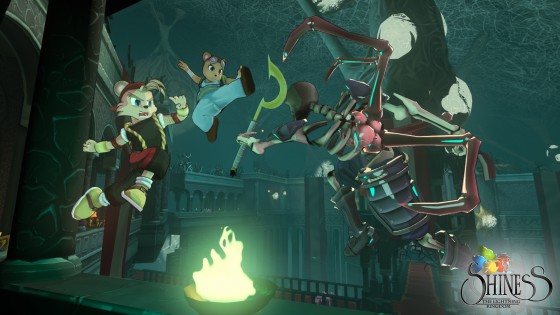 Thereâ€™s lot to take in during the opening, and it certainly doesnâ€™t help that the presentation is rather simplistic due to the Kickstarter-funded budget. The dialogue is, frankly, terrible. Most characters converse using short, truncated, sentences and very few NPCs have anything interesting to say. All signs point to the French-to-English translation being the issue; jokes often fail to hit the mark, suggesting that punchlines were simply lost in translation.

After the first chapter is out of the way though, following one surprisingly grandiose boss battle around 6-hours in, Shiness finally finds its feet. Everything clicks into place, the plot â€“ which involves a fallen King, the return of mysterious dark magic, and the threat of impending war â€“ becomes far less garbled, and the main missions are more focused. The second chapter has a far more appealing setting, too: an open-world plain uncannily similar to Zeldaâ€™s Hyrule field, complete with a ramshackle farm.

As well as being rather easy on the eye – boasting picturesque views, quaint towns and lush rolling hills – Shiness is also easy going. Thatâ€™s the say, the quests are mostly straightforward and itâ€™s doubtful that the puzzles will have anybody flummoxed for long. They usually involve moving an object or two with Kayenneâ€™s telekinesis or using Chadoâ€™s boulders on pressure plates, with later puzzles calling for multiple skills. 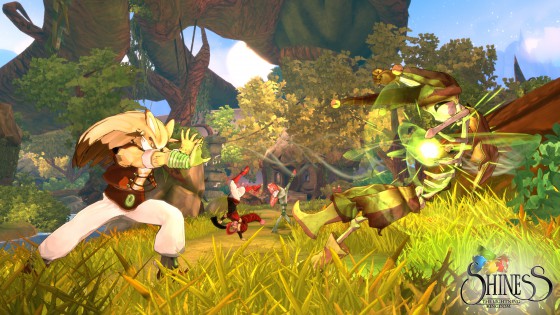 Outside of the main missions – set in snowy mountain ranges, skeleton-filled fortresses and forgotten forests â€“ there are a few optional side-quests, including one duly titled â€˜Catch â€˜em Allâ€™ that involves catching critters so an entrepreneur can open a zoo. Small creatures can be found and caught all over the world, giving resources for recipes. Sadly, thereâ€™s no Zelda-style cooking element â€“ resources are simply handed to traders in return for a new Shi scroll, or melee discipline set.

When compared to other RPGs, Shinessâ€™ locations are modest in size. Theyâ€™re generally well designed with looping paths and short-cuts that eventually open, helping to keep backtracking to a minimum. The on-screen radar also always clearly indicates where to head next, while maps are clutter free. The fact that save points â€“ which refill health and magic gauges when used – are frequently found also shows that Enigami intended players to progress smoothly, regardless of genre experience.

Every now and then though youâ€™ll curse the developers for not making something a tad more obvious. We wasted a couple of hours aimlessly wandering due to overlooking the ability to fast-travel. Where was the item required to do so, you ask? Tucked away half-way down the potion list, of course. 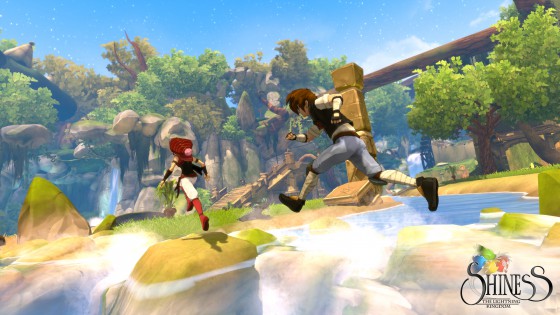 While quests arenâ€™t anything extraordinary, the combat system makes up for Shinessâ€™ lack of originality elsewhere. Fights take place in circular arenas and are one-on-one affairs, complete with the ability to tag in Chadoâ€™s comrades. Itâ€™s possible to punch and kick the opposition, performing combos and special moves a la a generic beatâ€™em up, as well as block and parry. Hyper Attacks meanwhile require a series of button presses in quick succession; a fine art thatâ€™s tricky to master.

Magic can also be used in combat, mostly coming in the form of projectiles. Each character has different affinity levels to each element (fire, water, wind, etc) with some only able to cast a single type. Spamming magic attacks is an efficient, if lazy, combat strategy. Occasionally though, youâ€™ll come across an enemy immune to magic or able to heal themselves quicker than you can cast and recharge, prompting a quick change in tactics. Additionally, all five characters can be pre-assigned automated support roles â€“ requesting them to heal as soon as health drops to a certain level â€“ and a wealth of items can be assigned to the d-pad.

Each battle is ranked depending on time and damage taken. â€˜Sâ€™ ranks are surprisingly effortless to obtain as in previously cleared areas enemy encounters last mere seconds, bestowing zero XP. This appears to be a design choice to prevent grinding and becoming too overpowered. Progressing through the story is enough to reach the level cap, providing you donâ€™t shy away from too many battles. 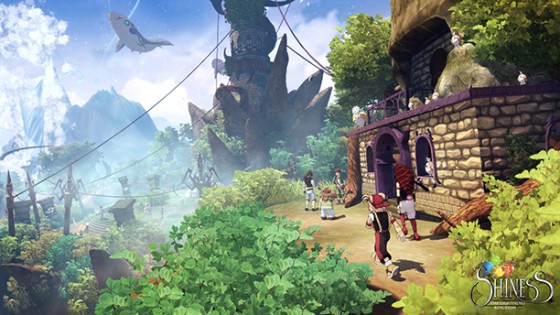 If youâ€™re thinking that the combat system sounds like itâ€™s attempting to cover all bases, then youâ€™re right. It isnâ€™t particularly refined. The camera sometimes misbehaves, obscuring action behind a rock or similar, and enemies can become trapped behind objects due to battles taking place in the standard environments rather than dedicated arenas. Moreover, there are instances where you still end up feeling the sting of an enemyâ€™s lengthy combo despite blocking in good time, cutting into your health bar significantly. This happens often during the multi-stage boss battles, and while it does frustrate, even tougher fights can be beaten after three or four attempts. Eventual success lies upon either taking a different character into battle (only three can be in a team at once), or by making better use of consumables.

Shiness: The Lightning Kingdom is a rocky, but memorable, adventure. Itâ€™s clearly a project created with passion – the fact that the art director created the characters back when they were a child tells us as much. Every now and then it shines as bright as a big-budget RPG, only for an unwelcome reminder of the gameâ€™s humble roots to come along and drag the experience down. Enigamiâ€™s bold ambitions sadly buckle under the constraints of the budget. The result is a game thatâ€™s easy to admire, but tough to love.