Had this cop-shop management sim released in the â€˜90s, it wouldâ€™ve been an Amiga title circa 1993. Itâ€™s reminiscent of sim games from that era, complete with cut-scenes that feature minimalistic flat-shaded polygons, a la Flashback and Another Word. You know, the kind of thing that made console gamers, with their endless stream of cutesy platformers and lacklustre movie tie-ins, feel jealous. Or at least until US Gold picked up the rights for a console conversion, results varying wildly.

That was the â€˜90s, of course. Also: entirely hypothetical. THQ Nordicâ€™s This is the Police has been made specifically with the Xbox One and PS4 in mind, and the result is a game thatâ€™s remarkably easy to playâ€¦if only because itâ€™s rather straight-forward. The whole thing is menu driven, using just a few button presses to send out squads and make all-important decisions. Those expecting to get behind the wheels of a police car, or take to the city streets, will be disappointed.

As Jack Boyd â€“ Freeburgâ€™s soon-to-retire Police Chief – itâ€™s your job to call the shots from the comfort of the police HQ. The premise is simple: keep things relatively quiet for the next 180 days while stashing away a nice retirement nest egg. How this money is gained is up to you, as it isnâ€™t long until the Mafia step in and promise to Boydâ€™s final days more lucrative providing he ignores their nefarious ways. With City Hall keeping an eye on Boyd though, this isnâ€™t as easy as it sounds. 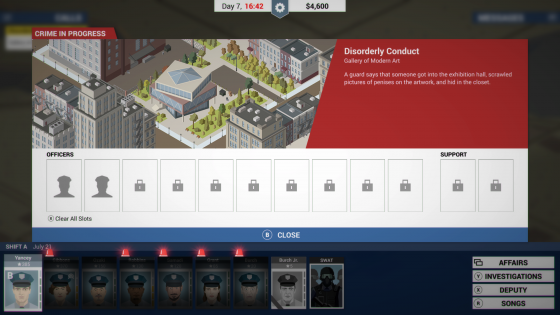 The daily grind is repetitive but pleasantly so, with each day starting by that morningâ€™s newspapers arriving on Boydâ€™s desk, helping to give a rough indication of current crime levels. Itâ€™s then time to hit the locker room. Two squads are at your disposal, working alternate shifts, and managing the roster is curiously involving. Some officers turn up drunk, and so itâ€™s your call to send them home or face potential consequences, while others make feeble excuses (â€œI forgot to feed my goldfishâ€) to try and get out of work. Others may fail to turn up entirely â€“ sound grounds for dismissal.

Boyd then heads into the control room, slips on a jazz or blues record â€“ the gameâ€™s soundtrack – and then itâ€™s time to get to work. A model of the city shows where calls are and the time left to respond, becoming slowly cloaked with darkness as the day goes on. A neat little visual touch. It doesnâ€™t take long to dispatch officers into the city centre, but driving out to the suburbs or the cityâ€™s outskirts takes time, and officers canâ€™t be sent out again until theyâ€™re back at the station. They each have an energy level to keep an eye on too. Tired cops will be less willing to turn up to work two shifts in a row, should extra patrols be needed. 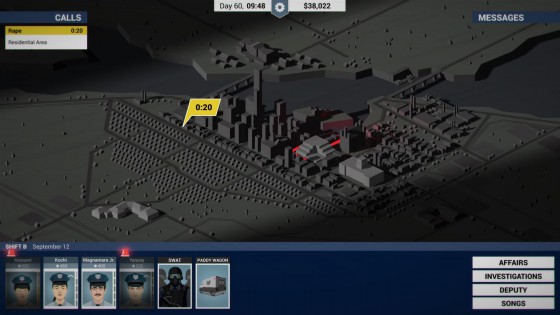 Officers are rated by experience, gaining and losing XP depending on whether they catch or lose their suspects. Over time youâ€™ll become more than acquainted with your crew, knowing exactly who your best men (and women) are. Alas, this only makes it even more disheartening when they die in the line of duty. Hiring and firing officers is but a small part of Boydâ€™s daily grind, as each call must be vetted and treated appropriately. Call descriptions are unique, and so skim reading text or ignoring it completely isnâ€™t advised â€“ you may end up sending a squad to whatâ€™s blatantly a hoax call, or send just two officers and no support to a 100-person riot. Investigations meanwhile provide variation, requiring snapshots to be put into the correct order based on eyewitness reports.

The daily grind is repetitive, but pleasantly so

Youâ€™ll soon learn that the real enemy isnâ€™t the scum on the streets or even the Mafia, but rather City Hall. Make too many wrong choices and theyâ€™ll cut your budget, demanding an officer to be removed from the payroll. They genuinely expect you to bend over backwards at times, requesting officers for special events even though the roster is slim that day, or making absurd requests thatâ€™ll permanently mess up your roster. The call to sack all coloured officers or make all elderly personnel redundant comes around at least once during each of the four chapters.

Splitting the 180-day runtime into chapters works well, with lengthy cut-scenes fleshing out Boydâ€™s backstory and personal struggles. Although hammy, the voice-acting is mostly a cut above similar indie games, and thereâ€™s some hard-hitting dialogue. The call descriptions are mostly well-written too, throwing in a few pop-culture references. One example: a disturbance called in by a boy called Kevin who has been left home alone. So while the gameâ€™s tone is usually serious, with some race and gender hate crimes on the agenda, it isnâ€™t entirely po-faced. 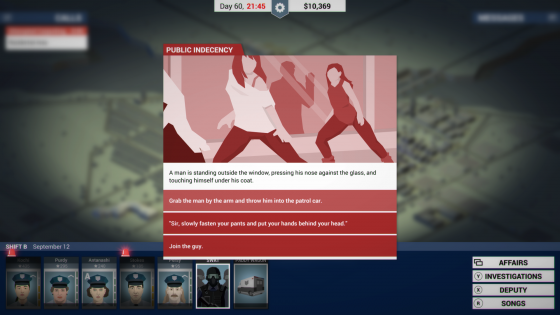 But make no mistake: This is the Police is a simple game. This isnâ€™t a huge problem, though. Shifts are varied and compelling enough to not only want to see the end of each day, but to also see what challenges or unique proposals the next day brings.

The major problems lie within the gameâ€™s budget, ergo the presentation. Every successful call ends with the same image of a shadowy individual being cuffed; every failed call ends with somebody hot-footing it down a dark alleyway. Some alternate artwork would have done the game wonders but was clearly way beyond the meagre budget. Itâ€™s so lacking â€“ and text-heavy – in some areas that you have to use your imagination to try and fill the blanks. This would have been an Amiga game that came on a single floppy disc, certainly.

A bigger budget – and more publisher confidence – would have resulted in something a tad more memorable, as well as helping it appeal to a far larger audience. As it stands, it’s a well-intended experience you should definitely try, but with guarded expectations.