Countless games overstay their welcome, adding a few extra hours of play by recycling ideas and padding out stories with unnecessary cut-scenes. At around 6 hours long, Snake Pass isnâ€™t one of these games. It uses new ideas and set-pieces sparingly over the course of fifteen short stages, resulting in a game that feels remarkably trim, gripping from start to finish.

The use of the word â€˜grippingâ€™ was intentional as itâ€™s something youâ€™ll be doing a lot of in Snake Pass. Cast into the role of the unlikeliest of platforming heroes â€“ a slithering snake â€“ the focus is on overcoming obstacles by wrapping yourself around poles, ladders and more, shimmying along while gripping for dear life. This wayward choice of protagonist means thereâ€™s no jumping, and certainly no double-jumping. 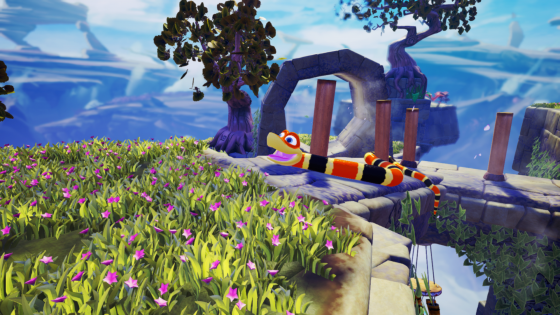 Thereâ€™s one other twist, too: no enemies whatsoever. Instead, the onus is on finding collectable wisps and coins, which are usually located in precarious places, as well as the glowing magical stones that open the portal to the next world. Being the storyline’s crux, the reason the portal stone are missing in the first place is eventually explained in the cut-scenes.

The three worlds each have a theme and their own environmental hazards, intended to fill the void left by the lack of enemies. The first world teaches the basics, which are precisely that: a simple and intuitive three button control system is used to grip, move forward, and twist Noodle the snakeâ€™s noggin around objects. After clinging onto a pole or similar, itâ€™s then a case of wrapping Noodle around it by rotating the analogue stick. Some fascinating tech is on display, with Noodle slithering along the ground and wrapping around things in a very natural and lifelike fashion. 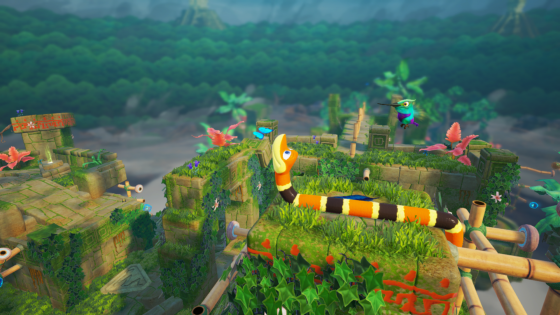 The inclusion of water chambers is the first major shake-up, complete with switches that raise and lower water levels. Switches can be classed as obstacles too, incidentally, as theyâ€™re activated in different ways. Other worlds add pits full of spikes and pools of lava, with each stage larger than the last. Over time the floating islands that each stage comprises of becoming further part, making worlds seem far larger than they are.

Noodleâ€™s field of vision is intentionally restricted too. Want to find out whatâ€™s on top of a structure? Because the camera is always positioned close to the ground, you have no option but to climb. Noodleâ€™s hummingbird buddy can take the likeable lead to new areas, however, gaining a â€˜long haul flightâ€™ upgrade around halfway in.

Snake Pass saves its best idea for last; something else that helps maintain interest until the end. It turns out that a snakeâ€™s worst enemy is not mongoose or eagle, but rather the wind. The final world sees Noodle up against gusts and gales, and so now traversal must be timed perfectly or face being blown into the depths below. We love the use of windmills in the final world, allowing Noodle to reach new areas by clambering onto their sails. Riding gusts of wind to access new islands is less straightforward, however, leading to some cheap deaths. The final stage took us over an hour to beat due to featuring perhaps a few too many sections that require perfect timing. 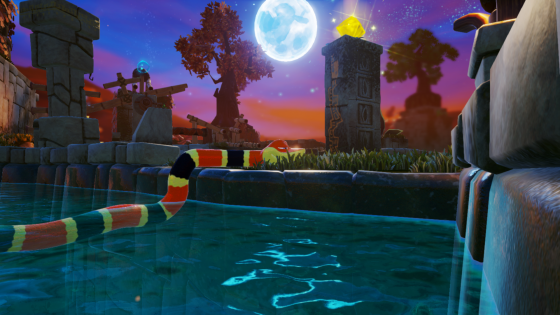 The 6-hour runtime quoted in the opening paragraph is a tad misleading – those looking to find every collectable can add another 2 hours or so onto that figure. The achievements/trophies are time-consuming as well, with a couple gained by completing certain stages without touching the floor or water. Also: another for cycling through Noodleâ€™s facial expressions. He may not have much to say, but heâ€™s still quite a charismatic fellow.

Noodleâ€™s adventure is an innovative experience and one with far more polish on display than similar physics-based action games. Itâ€™s an easy recommendation, but it falls just short of being truly great. Why the team didnâ€™t have a proper stab at implementing puzzles or introduce a few more physics-based set-pieces, is a bit of a mystery. Indeed, it does feel as if a few ideas were being kept back for a possible sequel. As an experience all too fleeting, a second Snake Pass could be a wondrous thing.