Playtonicâ€™s bat and lizard duo meet many oddball characters during their journey, but none are more loveable than Rextro – a bright orange, low polygon, dinosaur whoâ€™s firmly stuck in the past. As well as completely forgetting who Yooka and Laylee are at one point â€“ due to a lack of memory, of course â€“ a reference to cheat codes being passÃ© is also made. While this is true, spending just an hour or so with Yooka-Laylee reminds us just how easy gamers have it nowadays, even without cheats.

To say Yooka-Laylee is cut from the same cloth as Banjo-Kazooie and Donkey Kong 64 would be an understatement â€“ it is, to all purpose and extent, a brand-new Banjo-Kazooie. Thatâ€™s to say, Playtonic hasn’t succumbed to modern day standards, or tinkered too heavily with the winning formulas of the aforementioned. Thereâ€™s no map, radar, glowing paths, or anything of the sort present â€“ itâ€™s entirely up to the player to explore and discover new areas for themselves while scouting high and low for collectables. Even when expanding worlds to make them even larger than they already are, all you get is a blink-and-youâ€™ll-miss-it flyby to showcase the new areas.

It takes a little bit of time to get back into the 64-bit swing. Soon though youâ€™ll learn that if it isnâ€™t instantly obvious how to complete a challenge, then you probably havenâ€™t unlocked the special move required yet. A vocal prompt would have been helpful in these situations â€“ we wasted an hour in the opening world trying to gain collectables that were unobtainable until later – and this lack of guidance is Yooka-Layleeâ€™s biggest problem. Indeed, younger gamers weaned on the likes of Skylanders may find Yooka-Layleeâ€™s ways archaic â€“ the checkpoint system is the same as BKâ€™s, restarting from the last door entered – but this only further highlights just how good a job Playtonic has done here. Itâ€™s an experience faithful to its predecessors, right down to the challenging but fair difficulty level. 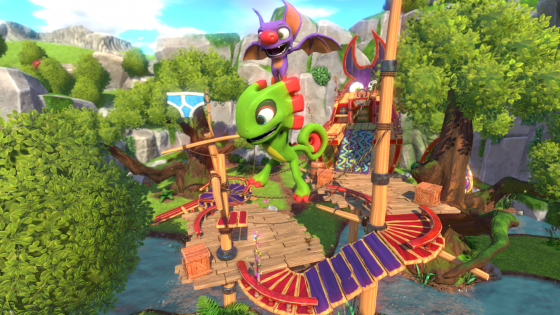 Playtonicâ€™s experience and expertise are apparent throughout, and most notable within the level design. The five worlds (known as Grand Tomes) are built-up and complex, featuring numerous indoor side-areas, and it appears that Playtonic learned something from DK64 as the number of collectables isnâ€™t too overwhelming. There are 145 Pagies to collect either by beating challenges or solving puzzles: 25 spread across each of the five Grand Tomes, plus 20 hidden within the hub. Each world also has five Ghost Writers to find, caught in different ways. 100 Pagies are required to open the final area, an amount we managed to obtain after around 25 hours of play. Those aiming for 100% can expect to hit the 50-hour mark easily, and that’s without factoring in Rextro’s multiplayer mini-games.

the number of collectables isnâ€™t too overwhelming

Pagies, like the name loosely suggests, are pages from a magical book. This elusive tome once belonged to Yooka and Laylee, but was sucked into a book devouring machine created by the magnificently pompous Capital B â€“ the newly appointed boss of a toxic-waste spewing factory. This hazard filled workplace acts as the hub, containing the Grand Tomes that give access Yooka and Laylee to new worlds after learning the appropriate moves. The hub has numerous shortcuts to open that make backtracking easier, too. Again, itâ€™s a testament to Playtonicâ€™s experience that not only are the Pagies in the hub hard to find, but some Grand Tomes locations also arenâ€™t immediately obvious. This does lead to some aimless wandering, however, which can become annoying as loading screens appear when entering different areas. Fingers crossed the upcoming Switch version will rectify this.

Grand Tomes also contain Quills, used to purchase new moves – in any order, we might add – from Trowzer, a snake wearing an ill-fitting pair of trousers. A trouser snake. Heâ€™s something of a neutral party; a dodgy salesman that sometimes gives new moves away for free, but is clearly motivated by money. Or Quills, in this case. Yooka meanwhile is headstrong and determined like Banjo, but far less bumbling, while Laylee is just as pleasingly sarcastic as Kazooie but less snappy. To make up for the duoâ€™s lack of egg-firing abilities, Yooka can swallow and spit out seeds from nearby plants. These bestow elemental effects (fire, ice, etc) often used in puzzle solving. 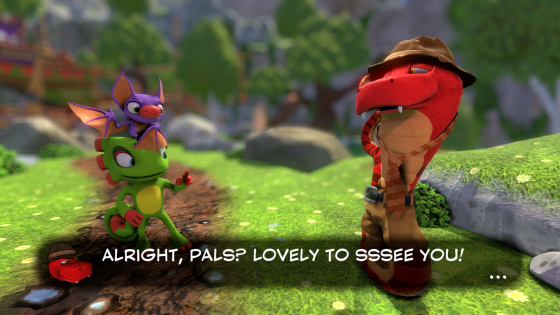 Each Grand Tome is different from the last, and significantly so. Opening world Tribalstack Tropics is clearly intended to prompt a bout of nostalgia, accompanied by a very Banjo-Kazooie-eqsue musical score, plinky-plonky xylophone melodies and all. We get the impression this is the game world Playtonicâ€™s veteran staffers have always wanted to create, but couldnâ€™t due to the technical constraints of consoles prior. A huge tribal tower ascends into the sky, complete with whistling winds and one incredibly picturesque view once you reach the top. Itâ€™s even possible to leap off the summit and glide back down to the ground below, landing anywhere you please. Like all worlds, Tribalstackâ€™s boss can be beaten quite early on; unlike other worlds, this one includes two races to complete. These races are tricky but far from approaching a â€˜Wizpigâ€™ level of toughness. Bosses pose a stiff challenge as well, usually taking several attempts before pinning down their attack patterns.

The second Grand Tome takes us to an ice world which includes an ice palace and a large underwater area. When inside the palace, the action is viewed from either a side-on or isometric perspective. As much as we want to say that this is a nod back to Rareâ€™s Ultimate days, we canâ€™t be entirely sure. It probably is, though, seeing even a cheeky nod to BK is made at one point. Things take a small step back for the third Grand Tome â€“ a dank, polluted, swamp. Itâ€™s easily the most traditional world, in the sense that it could probably be re-created using N64 hardware due to its small size and linearity. Progression is a simple case of travelling from one island to the next, beating challenges along the way. Outside of a large lake, thereâ€™s little scope for exploration here. We managed to gain over half the Pagies within an hour or so, and managed to find all 200 Quills here with minimal effort.

Incidentally, finding all Quills in a world bags a Pagie â€“ a task thatâ€™ll have you searching everywhere. Fortunately, itâ€™s possible to equip a tonic (read: perk) that emits a wolf-whistle when an important item is near. 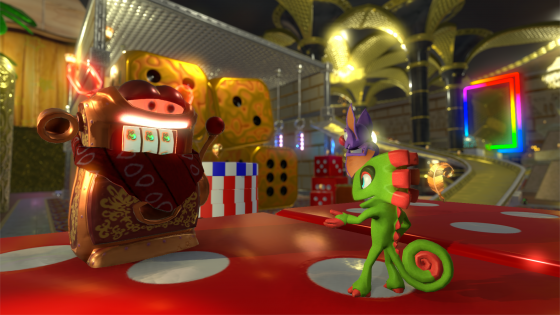 Later on Capital Cashino opens up, and itâ€™s here that the â€˜rescue Pagies from Cagiesâ€™ formula receives a good old shake up. Capital Bâ€™s party palace is filled with mini-games, including fruit machines (literal one armed bandits, in this case), a golf course, and pachinko machines that bestow Cashino Tokens. Ten are required to gain a Pagie, with most mini-games coughing up five. This Grand Tome also has the best temporary DNA transformation â€“ Yooka-Layleeâ€™s answer to Mumbo Jumboâ€™s spells â€“ and the toughest minecart challenge. The talking minecart â€“ Kartos – is another memorable character, and much like Rextro makes dozens of references to lost gaming traditions.

Itâ€™s our understanding that the fifth Grand Tome hasnâ€™t had a great deal of coverage in the press, so we wonâ€™t detail it heavily. Rest assured that it puts all the special moves unlocked so far to good use, with puzzles more complex and indoor challenge arenas that demand a decent sense of timing. It also has quite an abstract colour palate, making it far removed from earlier environs. 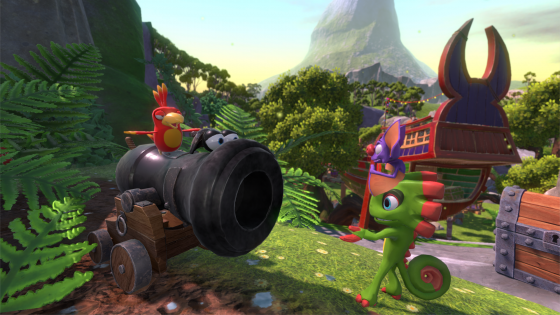 Entering a new Grand Tome for the first time and seeing what challenges lie ahead is genuinely thrilling, let alone the fact that youâ€™ll get to hear another one of the excellent musical scores anew. Revisiting worlds with a new move and finally grabbing a once elusive Pagie is mighty satisfying, too.

Most characters exclusive to that world alone; a ragtag bunch varying from fellow treasure hunter Shovel Knight to a talking discarded shopping trolley, and good old British humour is present throughout including a handful of double entendres that probably wouldnâ€™t have escaped the eyes of Microsoft, let alone Nintendo. Thereâ€™s even an â€˜Only Fools and Horsesâ€™ reference chucked in; one thatâ€™ll no doubt go way over the heads of gamers outside the UK.

Speaking of Nintendo, Yooka-Laylee feels just as refined as a Nintendo first-party effort, if a little lacking in polish here and there. The camera always behaves itself, and even though the controls do become quite convoluted after unlocking several new moves, the layout remains intuitive. Simply, Yooka-Laylee is a masterclass in platform game design, with years â€“ if not decades â€“ of expertise on display, delivered with an unwavering air of confidence. By shunning modern conventions, Playtonic has given us something that feels surprisingly refreshing â€“ a glorious reinvention of a dormant genre.