This opening paragraph was going to detail how Disc Jam borrows elements from Speedball 2, Windjammers and good old everyday tennis, but it suddenly dawned upon us that itâ€™s essentially Discs of Tron, right down to the ill-fittingly skin-tight outfits and quintessentially â€˜80s neon hues.

Like all compelling sports games, including the ones already mentioned, Disc Jam relies heavily on fast reflexes and an acute sense of timing. As for rules and scoring, it borrows from tennis â€“ or badminton, if you prefer â€“ the most. The idea is to either hurl or lob a space-age disc, ideally aiming for the back of the court. Hitting the back of the net scores 10 points; causing it to hit the ground via a lob or a failed catch earns 7 points. Fortunately for those not quick on the draw, itâ€™s possible to recover from fumbled catches â€“ a few precious seconds are given to try and regain control. 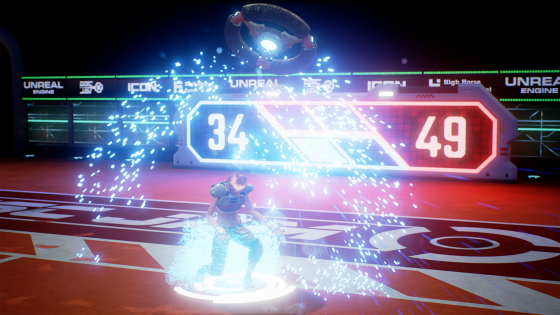 The first to score 50 wins the set, with 2 sets required to win the match. Sets are generally quite close, and thereâ€™s potential for some lengthy â€“ and gripping â€“ rallies, but the obtuse scoring system does lead to some odd final scores. I.e. a winning score of over 50, against the oppositionâ€™s 48.

The disc is far deadlier than your everyday Frisbee, exploding on impact to send the opposition flying across the court – and sometimes even out of the arena – wonky ragdoll physics and all. The quicker itâ€™s caught and returned, the faster the disc flies â€“ a gameplay mechanic that relies on perfectly timed button presses.

This isnâ€™t a simple case of survival of the quickest though, as gentle manipulation of the analogue stick comes into play both when serving and returning. Pushing far left or right will cause the disc to ricochet off the walls, but this alone usually isnâ€™t enough to catch players off guard. Success often lies on gently curving shots so that the disc elegantly flies across the court without slamming off walls. Failing this, thereâ€™s also a tricky-to-master 180 degree throw which causes the disc to bounce off a single wall in quick succession, clattering satisfyingly and sparking as it goes. 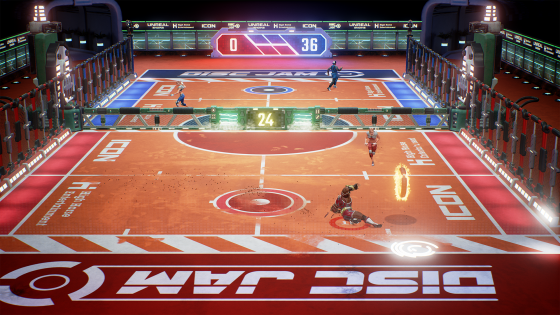 Players are equipped with a shield, too, which can be used to deflect the disc over the net. Then thereâ€™s the small matter of the power shot. All four playable characters â€“ which vary from an extraordinarily muscularly fellow to a nimble, ninja-like, female â€“ have their own special move that sends the disc spiralling across the court, leaving a trail of fire behind. Characters can be kitted out in different attire and have a range of unlockable taunts, gained at random from an item dispenser.

With a fast pace, easy to pick-up but difficult to master controls, and alluringly bright visuals, Disc Jam is instantly likeable. But it doesnâ€™t take long at all to realise that while the fundamentals are present and correct, itâ€™s severely lacking when it comes to additional content. Thereâ€™s no single-player mode whatsoever: just online, split-screen and LAN play for either singles or doubles. Thatâ€™s the biggest problem by far, but due to being this monthâ€™s PS Plus freebie it isnâ€™t a deal breaker as itâ€™s easy to find players currently. Of course, this may change in time â€“ Dead Star was once a PS Plus freebie with countless players, but was recently removed from PSN after player counts fell so heavily that it wasnâ€™t even worth keeping servers running. 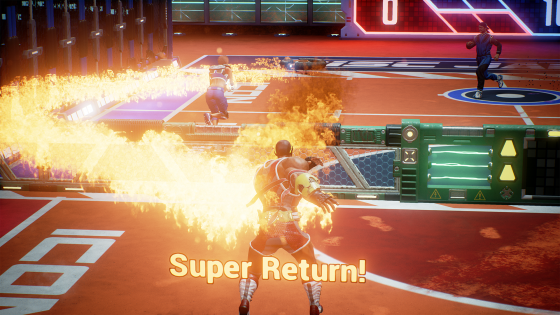 Itâ€™s a little lacking in other areas too, including sound design. The music tracks present are decent but few, and the lack of a commentator is notable. The lack of a vocal countdown, or even a whistle or similar, before a round starts is another odd decision â€“ itâ€™s common to catch players off guard if they failed to realise that matchmaking has finished and a match has begun. On the upside, there are no annoying quips or taunts from players either. They merely grunt and groan when returning shots, rather than retorting with corny catchphrases. That said, the lack of commentary does rob the package as a whole of some personality.

Disc Jam blatantly fancies itself as an alternative to Rocket League â€“ the presentation, in particular, is uncannily similar â€“ but is unlikely to go on to recreate a similar success story. It simply doesnâ€™t feel substantial enough, only offering quick-fire bursts of entertainment. If it ever receives a sub-Â£20 retail release, weâ€™d wager the lack of content would come under even heavier scrutiny.