As a game that entails little more than making and spending money, Clicker Heroes could only ever exist within the realms of free-to-play.

The action takes place on a single screen, and it all begins with a single tap of the attack button to kill an enemy. Another then takes its place. An endless loop, no less. Enemies donâ€™t fight back, or do anything other than merrily bob up and down, and each is defeated by mindless button bashing.

Defeated enemies drop gold, and soon enough falls your way to be able to hire a hero. Heroes do the clicking for you, and so now thereâ€™s almost no input required at all. From here on in its a (ridiculously) simple case of raking in the cash, hiring heroes and levelling them up.

Bosses must be defeated within a time limit, and so sometimes youâ€™ll have to revisit past stages to grind for cash to level up heroes, but thatâ€™s about as in-depth â€“ and interactive – as it gets. 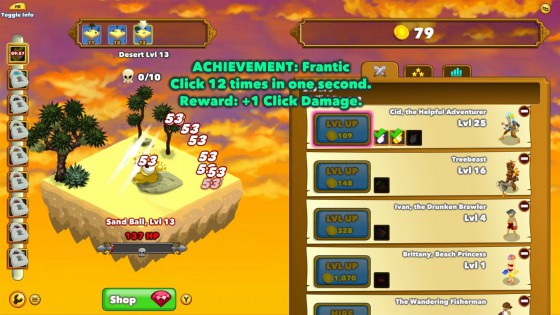 The package is held together, albeit loosely, by an in-game achievement system. The amount of money earned, and the potential damage your party can deal, soon skyrockets into millions and billions, and so achievements are for such unlikely things as levelling up 25,000 times.

It may sound like an arduous task, but it isnâ€™t long until your heroes are making a billion gold an hour; an amount that seems impressive until you consider theyâ€™re just insignificant numbers. A million, billion or trillion â€“ it matters not. The experience doesnâ€™t become any more challenging, engaging or involving; the level of interaction is kept at the bare minimum throughout.

Clicker Heroes is billed as an â€˜idle RPGâ€™ by its developers as even when you arenâ€™t playing money is still being made. The idea is to check back occasionally to spend gains and clear a few more stages, or leave it or while doing something else.

No game has pushed the definition of â€˜RPGâ€™ like this before. Without a central character, plot or purpose there is no role being fulfilled. No sense of adventure, no scope for discovery. Itâ€™s a game for lazy achievement hunters, and nobody else.