In 1999, MX Nitro would have been published by Midway. It’s that sort of game. A bit brash, a bit dumb, but plenty of fun with it. Think Hydro Thunder. But in futuristic 2017, it’s from Miniclip, purveyors of web and mobile games, and Saber Interactive, who have worked on everything from Halo to casino games. The modern world, eh?

It’s not particularly helpful to know that it’s based on a browser game, because MX Nitro is a much more complete package than that might suggest. It’s not wildly original, though: this is motocross, and it adopts an approach familiar from the likes of Trials Fusion – a roughly side-on view, and no need for steering, you just take care of shifting the balance of the bike.

It’s also a much better looking game than it’s origins might suggest. The actual style of presentation, however, comes from another altogether gnarlier time. The bosses – and actually the fact that there are bosses in a racing game at all – are the most jarring, with their trash talk every time you line up alongside them. It’s more quaint than annoying though. 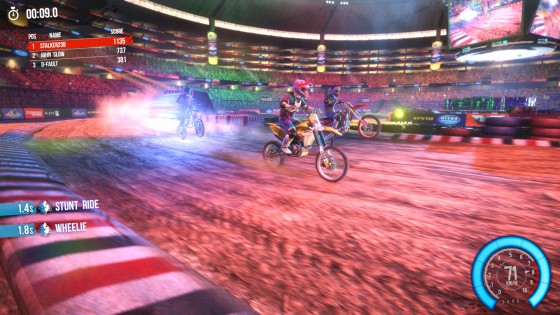 The career mode offers a surprising amount of variety. The majority of events are races of one form or another, but your competitors are largely irrelevant: there’s no interaction with them, and they perform so consistently that really it’s you against the course and the clock. It’s rare to complete a track to a decent standard and not hit the required result.

That isn’t a problem though, because the courses present a sufficiently interesting challenge. There’s a lot of focus on tricks even in races, since they yield nitro boost as well as points. The task boils down to learning the course, working out how much nitro you need at any given point, and how much risk you need to take in performing tricks to earn that nitro. On the best courses it’s a completely satisfying puzzle, revealing itself over repeated failed attempts.

Restarting, incidentally, is both frequent and fast – a quick tap of the PS4’s touch pad is all it takes. 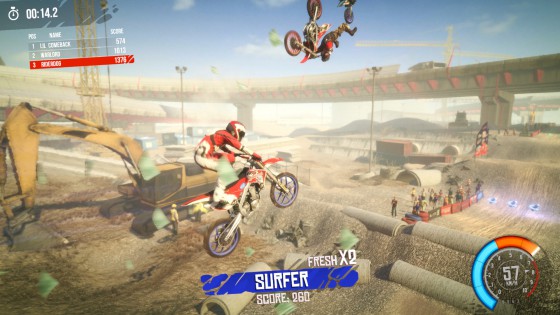 The trick system is certainly comprehensive, but not particularly subtle. As such the trick-based levels aren’t quite as strong, but variations such as elimination and synchronised events keep things interesting. It also helps that levels are very short – so it’s not long until it’s onto the next.

But then there are the bosses. A handfuls of levels are unlocked at a time, with a boss level to complete at the end. These are comfortably the most difficult levels, and while that can get frustrating – particularly since it will be the only uncompleted level available – they do highlight some subtleties that might otherwise get lost.

There is a choice of bikes with different strengths, and a rudimentary upgrade system, which can absolutely make the difference against a boss. It’s also when you’re forced to think a bit more about tricks, rather than happily mashing the face buttons. 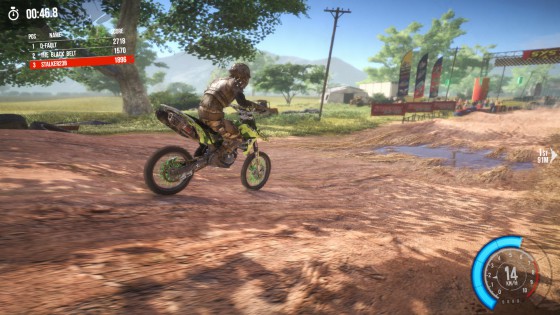 There are variations on the wheelie, but otherwise the tricks are all airborne. Landing is therefore a crucial aspect, and the game’s pretty fair – there are some slightly questionable physics, but if you end up landing on your face it’s more often because you pushed the multiple back flips too far, and if you accidentally do a superman just as you’re about to hit the ground and break your back on the seat, then that’s your fault.

It’s in balancing that risk and reward that the game finds its sweet spot. Brash dumb fun? On the surface, yes, but it’s not as stupid as it might seem.