British daytime quiz show Chain Letters never received a video game adaptation before its cancellation in 1997. Things may have been different had the word-based quiz hit our TV screens during Nintendoâ€™s casual market boom ten years ago. Clearly the concept of changing and rearranging four letter words to make new ones was well ahead of its time.

Typoman: Revised â€“ which has found its way onto Xbox One after launching on PC and Wii U last year â€“ is probably the closest weâ€™re ever going to get to a modern day Chain Letters tie-in. Itâ€™s a 2D platformer similar to Limbo and the recent Toby: The Secret Mine, favouring silhouettes, non-confrontational combat, and sinister shadowy beings. Set in a hellish world where objects and obstacles are formed from various, alterable, words, our hero â€“ constructed from the word â€˜HEROâ€™ â€“ is out to retrieve a lost limb, taken by an evil entity. Or to be more concise, itâ€™s a platformer with word game elements. 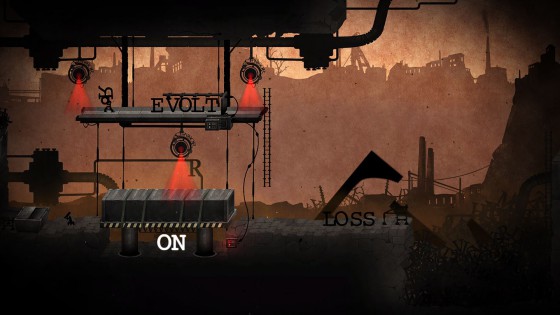 The prologue eases players into things gently, forming such four-letter words as â€˜OPENâ€™ and â€˜LIFTâ€™ to manoeuvre objects and progress through the level. Itâ€™s simple stuff thatâ€™s unlikely to tax, introducing the mechanics and word crafting in an easy to grasp manner. New words can either be formed on the fly by pushing them together or by unjumbling them like an anagram, removing surplus letters if necessary.

Sometimes Typoman will come across a bunch of letters simply placed in his path, while other times a more creative approach is required. One early standout calls for a lake to be drained by adding a â€˜Dâ€™ to the word â€˜RAINâ€™, situated in a cloud above said water hazard. Typoman can also carry and throw letters, but only within a small area â€“ red glowing sentinels, reminiscent of the shipâ€™s pilot in Pixarâ€™s Wall-E, prevent letters being taken to other puzzles. 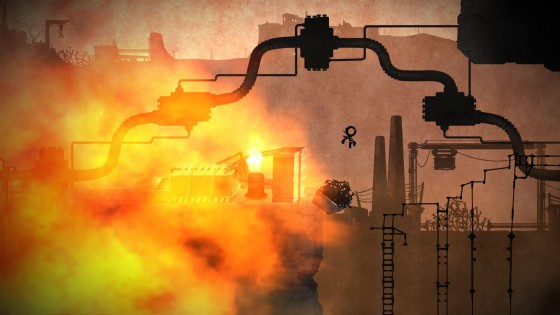 During the second chapter letter dispensers become available, expanding possibilities tenfold; possibilities for both puzzle solving and merriment. Some words have comical and surprising results, lending a welcome experimental streak. A fair few words do have the same effect, however â€“ ‘LOVE’, ‘SHIELD’, ‘EVADE’ and ‘COVER’ all bestow Typoman a glowing aura that absorbs damage from turrets.

Some words have comical and surprising results

Itâ€™s also during the second chapter than the difficulty level starts to rise, throwing a seven-letter anagram into the mix and a fast-paced platforming segment that requires acute timing.

The third chapter has a focus on finding opposite words to whatâ€™s needed and then summoning a creature known as a â€˜LIEâ€™ to create desired words. This chapter has more letter dispensers than the one before, and itâ€™s these puzzles that demand a degree of thought – often two words must be used in tandem to get machines fully operational or platforms in the right place.

And then? And then the game abruptly ends, after just three chapters lasting around an hour each and a boss battle too forgiving for its own good. Thatâ€™s to say, just when the game hits its stride and the puzzles begin to reach a creative peak, itâ€™s all over. 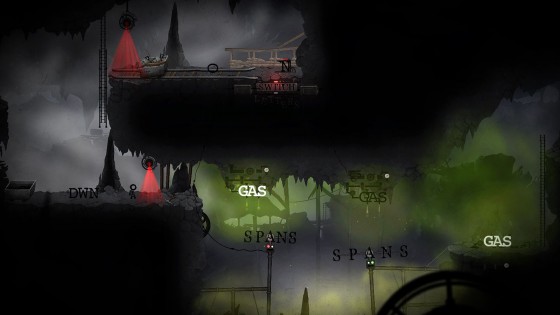 It seems that developers Braintree were aware of this being an issue, as theyâ€™ve seen fit to include a couple of unlockable mini-games. One involves making as many words as possible in the space of a minute, while the other entails finding opposites and deploying â€˜LIEâ€™ bots. These both tie into the global ranking feature â€“ an unexpected extra that shows the world rankings for both individual and collective words found.

It does seem a tad unfair to criticise Typoman: Revised so heavily for its shortness â€“ 3-4 hour runtimes are fast becoming the standard for indie platformers, especially for those selling for less than Â£10. There are far worse potential gaming missteps than abruptness too, lest we forget.

Come for the ride, but donâ€™t expect to be entertained for long. A couple of evenings, tops. Like a potential partner who isn’t too forthcoming with words, a third date is unlikely to happen.