When it comes to balancing seriousness and silliness, Japanese developers have it perfected. The Yakuza series is perhaps the most explementary juggling act out there, featuring cuts-scenes that often involve unpleasant themes, along with sub-quests that push the boundaries of ridiculousness. It makes for a heady mixture of surprise, suspense, and hilarity; this is one of those rare games that makes you believe anything is possible.

Franchise newcomers (the Yakuza series started out on PS2) may get the wrong impression initially. This â€˜80s set prequel is linear to begin with, featuring a few lengthy (approx. 15 min) cut-scenes in close proximity. Not only do they introduce one of two playable characters, but also develop the plot in a surprisingly rapid manner. A straightforward shakedown for cash goes awry, leading a low ranking yakuza – Kazuma Kiryu â€“ to be framed for murder.

Just to illustrate how fast the plot evolves, itâ€™s soon revealed that the murder isnâ€™t the issue â€“ itâ€™s the location in which it took place. A valuable empty lot in an estate due for renovation is causing a commotion amongst warring yakuza clans, and the murder has made the whole situation ten times worse. 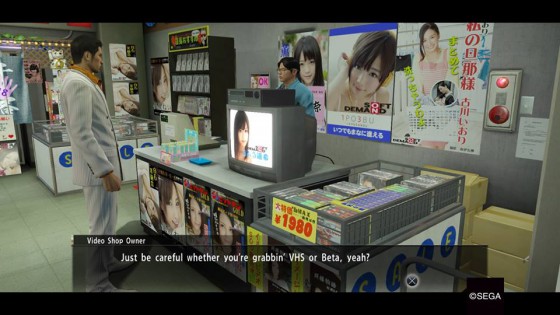 Once the opening cut-scene heavy chapters are out of the way, the experience becomes far less linear and the seriesâ€™ renown silliness starts to show. The gameâ€™s structure is simple yet effective â€“ main missions are automatically assigned, and thanks to the presence of an in-game map itâ€™s practically impossible to find yourself wondering how to progress.

While travelling to the next mission (on foot, we should addâ€¦although a taxi service is available), distractions litter the road ahead. The citizens of Kamurocho and Sotenbori approach our two heroes (a second lead, cabaret club owner Goro Majima is later introduced) in need of assistance frequently, and the option is there to either help or walk away. Drama lies around every â€˜80s neon-hued street corner.

Sub-quests are both inventive and entertaining, often resulting in a comical outcome. And as most can be completed in a matter of minutes, itâ€™s neigh impossible to turn down ignore an outcry for help. To detail more than a couple of quests would ruin the experience â€“ itâ€™s a delight to see what each sub-quest involves first-hand. Being roped into buying an adult magazine for a school kid, while avoiding the judgmental glares of women in the park opposite, is just the tip of the iceberg.

A wealth of mini-games are present too. So many, in fact, that we failed to gain the trophy for trying out each despite exploring both cities thoroughly. Slot car racing is one of the more in-depths diversions, while batting, fishing, bowling and karaoke are mildly involving. We didnâ€™t care for the traditional Japanese card and gambling games (shogi, mahjong, et al) but they do appear comprehensive. On top of all this, both the arcade iterations of Outrun and Space Harrier can be found within the quintessentially ’80s arcades, masterfully converted by M2. 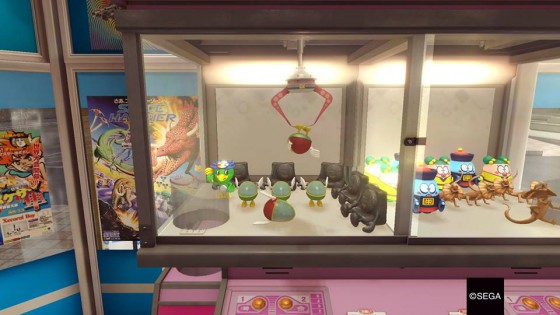 Combat isnâ€™t wholly masterful, but it is crunchy and satisfying with some wince-inducing final blows. Both Majima and Kiryu have three different fighting styles, slowly unlocked during the first half of the story. Majima has the slight upper hand above Kiryu, not only bringing a baseball bat into battle but able to perform breakdancing moves that would make Tekkenâ€™s Eddy Gordo blush.

the yakuza higher-ups are genuinely unnerving

Tougher fights can be made a tad easier by purchasing limited use weapons beforehand, some of which are amusing to use, such as a fan that literally blows enemies away. If all else fails, simply purchase a shotgun. Money earned from battle can be spent acquiring new moves and health bar extensions. Let cash accumulate for too long and youâ€™ll risk running into Mr. Shakedown, a muscley fellow at least 8 foot tall. He puts up a good fight â€“ taking him down for the first time is satisfying. 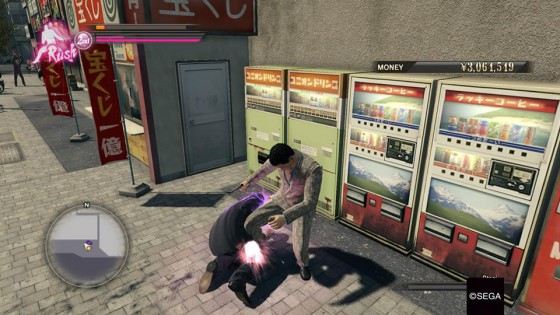 Both yakuza members are already respected within their respective clans for being fierce with their fists, and over time they become stronger still, fuelled by rage and revenge. Pre-boss battle cut-scenes are tense; the yakuza higher-ups are genuinely unnerving, something heightened further by their realistic facial animations and snappy, hard-hitting, dialogue. Indeed, the translation is explementary, resulting in some memorable conversations. It’s impossible not admire a game that calls underpants tighty whities.

Let cash accumulate for too long and youâ€™ll risk running into Mr. Shakedown

The story is split over 18 chapters lasting around 2-3 hours each, resulting in a respectable 35-40 hour playtime (completionists can add another 10-15 hours). Itâ€™s obvious the developers spent ages ensuring each chapter has enough twists, sub-quests and new mini-games to retain playerâ€™s attention, all while furthering character development. Each ends with a lengthy cut-scene with one plot revelation at the very least, setting the stage for the next chapter. As chapters alternate between protagonists, short prologues keep players up to speed.

When the conclusion draws near the pacing alters significantly. A focus on urgency puts sub-quests on the backseat, although itâ€™s still possible to wander off and buy supplies and partake in mini-games during these times. 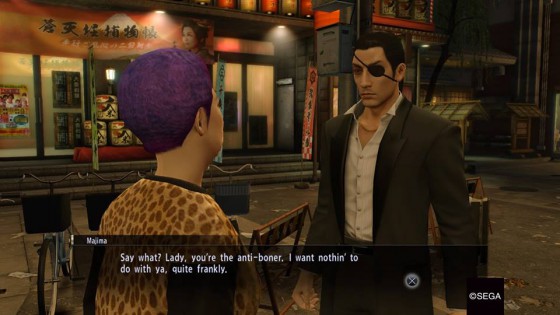 The silliness wanes towards the end too, but it’s easy to see why. The build-up wouldnâ€™t be anywhere near as dramatic if Majima and Kiryu had to run off and buy another adult magazine, or sit-in on another date where a young girl has lied to her father about having a boyfriend. Itâ€™s a slightly uneasy payoff, especially for those who have come for the silliness, but itâ€™s ultimately worth it â€“ the plot is one of the finest in recent times.

While itâ€™s sad that SEGA doesnâ€™t quite have the influence and resources they once had, itâ€™s still heartening that theyâ€™re able to produce games of this calibre now and then. Itâ€™s an experience beyond compare; one that made us feel like a â€˜snap happyâ€™ western tourist in Japan, filling the PS4â€™s social space with screenshots of utter absurdity. The best kind of absurdity, of course.