When this colourful match-three puzzler hit PSN last week it attracted a bit of attention. Weâ€™d wager this is down to the fact that it bears stark resemblance to Bust-A-Move (aka Puzzle Bubble), Taitoâ€™s celebrated classic thatâ€™s long overdue a comeback.

Indeed, quite why current license holder Square-Enix hasnâ€™t sought to create a new console/handheld Bust-A-Move since 2011â€™s Puzzle Bobble Universe is beyond us. The series is perfectly suited for digital distribution as past games have always arrived at less-than-full-price. Itâ€™s not like match-three puzzlers have fallen out of fashion either. In fact, theyâ€™re more popular than ever. Guess we can thank Facebook for that. 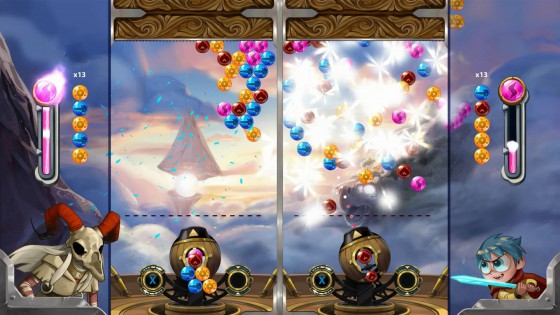 Adventure Popâ€™s set-up is identical to Tatioâ€™s age old classic. Launch coloured bubbles out of a cannon to clear the screen, performing slick trick shots by bouncing shots off walls. Two bubbles are loaded into the cannon at once which can be swapped between. Fail to clear the screen before the supply of projectiles depletes, or if the bubbles drop below the line during a boss stage, then itâ€™s game over. Actually, thatâ€™s a white lie â€“ being a free-to-play game, itâ€™s possible to cough up some cash to carry on playing. IAPs start at Â£2.39, rising to Â£39.99.

If Adventure Pop ripped off Bust-A-Move in a competent fashion weâ€™d be perfectly satisfied, but the developers couldnâ€™t resist putting their own twist on the formula. Theyâ€™ve gone and done a Tetris 2, pretty much, and tinkered with the simple yet pleasing mechanics by adding something that ruins the balance – levitation spheres, which rotate surrounding bubbles in an obtuse and unpredictable manner. Not only do they cause frustration but they also ruin the sheer simplicity, rotating after firing. 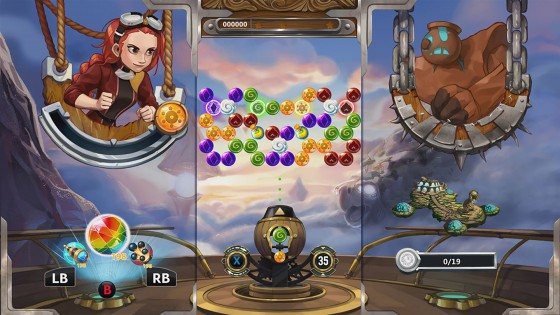 Like a cheap imitation knock off, the whole thing soon falls to pieces. During boss battles the game engine is prone to stuttering â€“ even though this is a simple 2D puzzler â€“ with bubbles taking a couple of seconds to restock; seconds that are precious as boss battles have a far faster pace than the rest of the game. As such, one-on-one battles feel punishing and unfair as if the developers purposely introduced difficulty spikes in hope that players will pay up to progress. Backing this theory up, aiming guides â€“ a Bust-A-Move staple, intended to help beginners â€“ have been reduced to â€˜premium add-onâ€™ status.

Being free-to-play, we always knew that a paywall would rear its head eventually, but we never expected it to appear during the first set of stages. Once the tutorial and opening boss battles are out the way, it becomes a very unforgiving and joyless experience. Coupled with an unappealing art direction â€“ pirate protagonist Penelope is joined by an apprentice magician with ridiculously proportioned eyes, as if to mock the anime stereotype â€“ youâ€™re left with a game that doesnâ€™t have a great deal going for it.