Team Ninjaâ€™s Nioh is the only major new release for this week, and while we donâ€™t doubt that itâ€™ll manage to break the top 20, it may struggle to make the top ten. With nothing to challenge it, RE7 may very well see a third week on top. Thatâ€™ll put it on par with RE3 and RE5, the current franchise record holders for an unbroken run at number one. 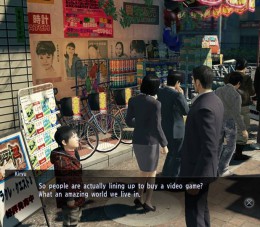 Hitman: The Complete First Season was the highest new arrival, making its debut at #4 â€“ a position that Square-Enix is no doubt delighted with, considering Agent 47â€™s latest has already â€˜done the businessâ€™ on the download services.

As for last weekâ€™s new arrivals, Kingdom Hearts 2.8 HD fell all the way from #3 to #21 while SEGAâ€™s Yakuza 0 has left the top 40 entirely. This could be down to availability â€“ itâ€™s currently showing as out of stock on both Amazon and GAME, suggesting SEGA underestimated demand.

Going back to the top ten, GTA V held onto #2 while FIFA 17 rose to #3. Call of Duty: Infinite Warfare saw a sales boost off the back of new DLC, but held onto #5 regardless.

Ubisoftâ€™s Watch_Dogs 2 and Steep both departed the top ten meanwhile, dropping to #12 and #17.