There’s no getting away from it: virtual reality is a bit of a faff. To get over that, a game needs to be both good and novel – to offer something VR-specific to make it worth the effort. Surprisingly, as a Google Daydream VR exclusive, EarthShape doesn’t.

And frustratingly, EarthShape is good. At heart, it’s a simple puzzle game: a ball enters a grid of dots and travels in a straight line, until it bounces off lines you draw between adjacent dots, to guide it into the circular goal. Complexity is added by time limits and introducing icons dotted around the grid – extra points, speed modifiers and so on. It works. It’s nice.

And it does work in VR: the Daydream controller is effective enough. But I couldn’t shake the nagging feeling that drawing lines on a grid would be easier and more intuitive on a touch screen.

The other frustration is that with such a neat little gameplay loop and reasonably short levels, it’s perfectly suited to filling moments of dead time. But once you’ve cleaned your phone screen, put it in the Daydream headset, plugged in headphones, adjusted the strap, put it on, centred the controller and opened the app, that moment is gone. 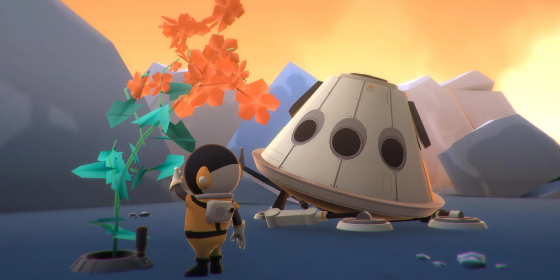 The justification for the VR, then, has to be in the presentation.

The story concerns an astronaut and his enjoyably dog-like landing vehicle, travelling the universe terraforming planets. The planet’s surface features in the background as you play, being taken over by plant life as the points rack up. The vast expanses have a pleasingly galactic colour palette, and play to the strengths of VR without impeding your view of the game itself. Which is as much as you can say about what is essentially wallpaper.

Hitting the points target means the planet is terraformed, and it’s off to the next. For the interplanetary sequences you have a first person view of the controls in the lander, and look around to choose the next planet. Again, being seated at the controls plays to VR’s strengths, but it’s hard to get excited about a slightly elaborate menu.

EarthShape is the work of Mike Bithell, so it’s no surprise that throughout all of this there’s an excellent voiceover. Thomas Was Alone had Danny Wallace, Volume had Andy Serkis; EarthShape has Sue Perkins, much celebrated host with Mel Gedroic of Light Lunch, the ’90s Channel 4 lunchtime chat show. And something else more recently, apparently.

It’s a pleasure to have Perkins voicing the script – I genuinely regard Light Lunch with extreme reverence – and there are some good lines. But while the presentation as a whole is undeniably charming, it gets repetitive; and worse, it feels like it’s in the way of the game.

I like EarthShape. I just wish it was easier to get to actually playing the thing.