Hereâ€™s an elongated story about one manâ€™s junk becoming another manâ€™s treasure. While scouring the stalls at a car boot sale a few weeks back (the local boot sale runs all year round, come rain or shine) I came across a small collection of â€˜90s candy stick packets. Empty confectionary boxes which I was keen to hand over money for; literally junk â€“ something most people would have thrown away. 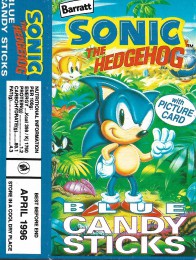 It was brightly hued Sonic the Hedgehog branded packaging that caught my attention, standing out from the rest like a sore thumb. With its official Sonic artwork and all, this packaging was so quintessentially â€˜90s I couldnâ€™t pass it by. I paid Â£1.50 for the lot, with empty Looney Tunes, The Real Ghostbusters and Jurassic Park boxes making up the rest of the assortment.

For the uninformed, candy sticks are small and white â€“ or in this case, blue – and have a chalky texture due to being made from a mixture of sugar and tapioca. Despite still being around today theyâ€™re often seen as a â€˜vintage sweetâ€™ like Wham bars and Drumstick lollies. Their inexpensive cost – around 20p a packet â€“ made them a popular after school treat, and the fact that they looked a bit like cigarettes probably helped boost their popularity with school kids too.

Although I was a huge SEGA fan in the â€˜90s, I donâ€™t recall ever seeing these in stores. My local newsagent clearly wasnâ€™t up-to-date with current candy stick trends. 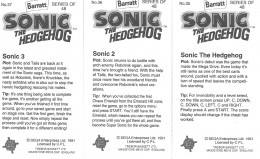 Upon closer inspection of the packaging, I noticed they originally came with picture cards â€“ 48 in total, featuring screenshots of popular Mega Drive games along with a cheat code and plot synopsis.

Eager to find images of these, or perhaps a full list for reference, I took to Google. A search for â€˜Barrattâ€™s Sonic the Hedgehog candy stick cardsâ€™ brought up little, aside this confused Sonic fan asking what the heck candy sticks are. eBay was slightly fruitful if discouraging â€“ a small smattering of single cards for 99p each (plus p&p).

Digging around the internet a little deeper, I finally found an online store specialising in trading cards, cigarettes cards and such. They had a full set in stock, luck would have it, and for a remarkably low price considering their apparent rarity. Itâ€™s not hard to imagine most kids throwing these cards away, losing them at school or leaving them in pockets so they fall fowl of the washing machine. 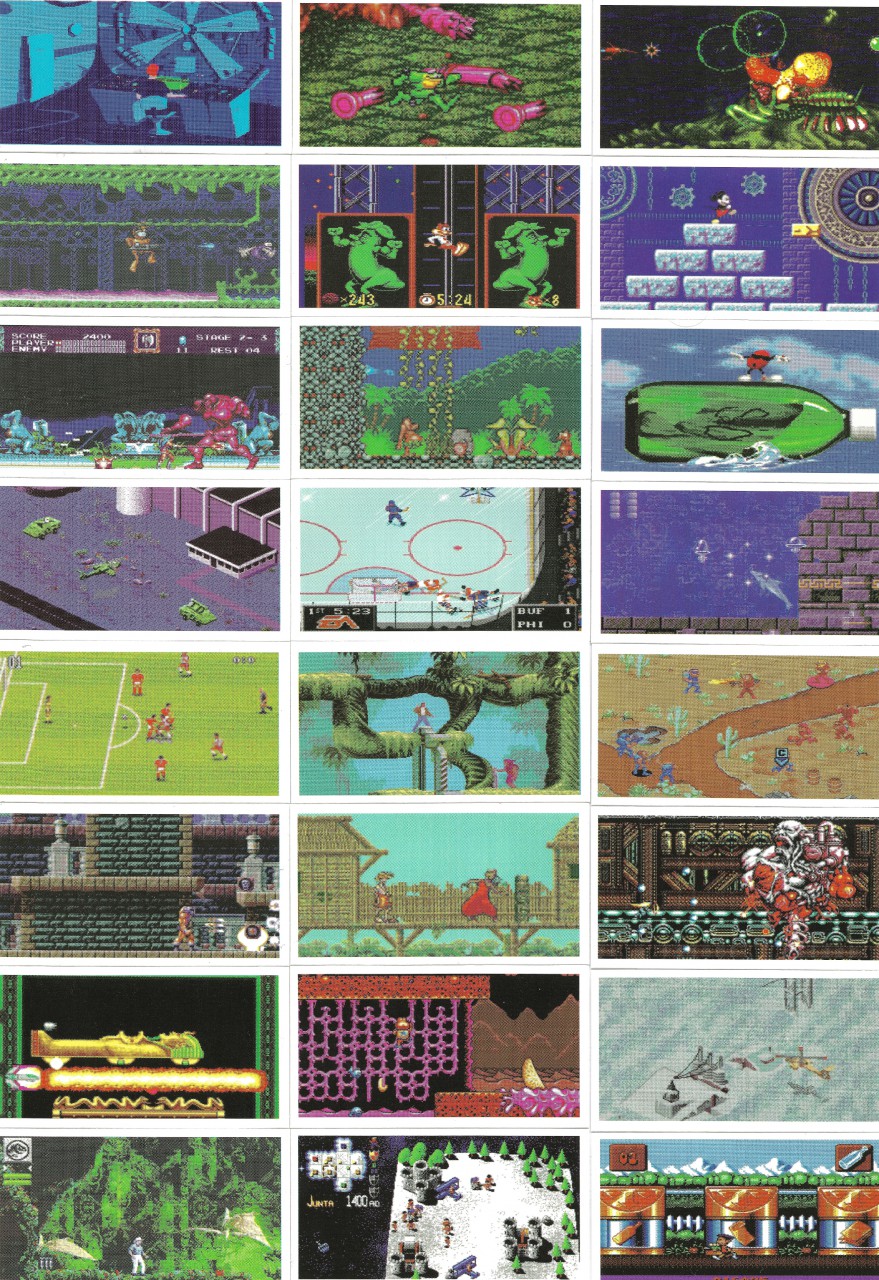 Curiously, it was Computer and Video Games magazine that provided the game descriptions and cheat codes. As such, the descriptions are well-written (Sonic the Hedgehog is rightly attributed to helping the Mega Drive become a success) and the game tips are genuinely useful, mostly being a mixture of passwords and cheats for extra lives and level skips.

I secretly hoped the descriptions would be embarrassingly awful, but no: theyâ€™re factually correct and resoundingly honest. Itâ€™s even noted that Mortal Kombat isnâ€™t good as Street Fighter II. Word.

Due to the small size of the cards they feature just a snippet of action rather than a full screenshot. Both first and third-party games featured, mostly from around 1993 â€“ the year the Mega Drive hit its peak of popularity. Sonic, Sonic 2 and Sonic 3 had their own cards, but oddly Sonic Spinball was omitted. There were very few movie tie-ins also, which may have been down to licensing â€“ Jurassic Park was the only one, which SEGA would have held the rights for at the time. 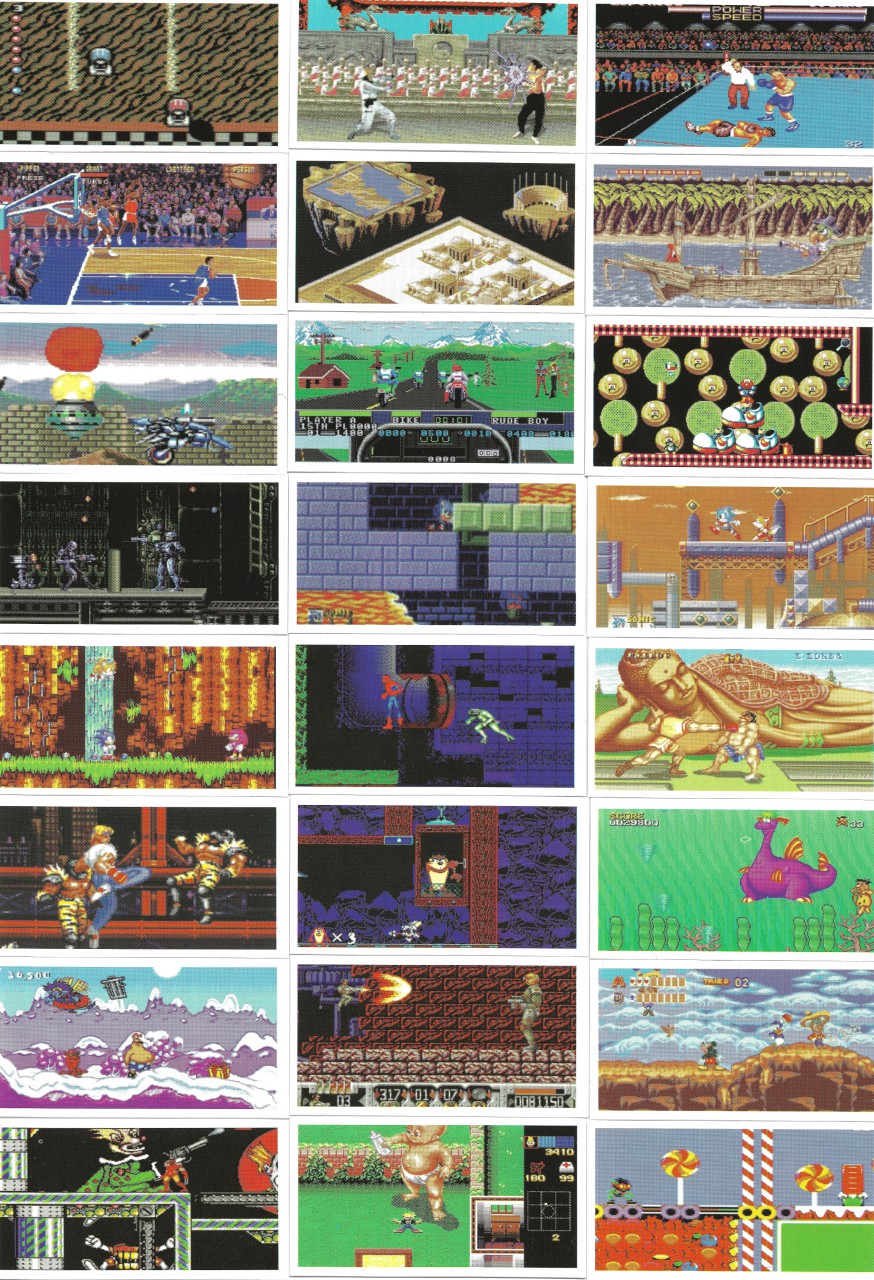 Konami’s Zombies Ate my Neighbours was simply known as â€˜Zombiesâ€™ on Mega Drive, if youâ€™re scratching your head over that one.

So, one piece of junk eventually lead to treasure â€“ a full set of collectable cards even more obscure than Paniniâ€™s SEGA Super Play cards. With no complete list and very few images online until now, it feels good to finally fill a gap in the Mega Driveâ€™s history.