When creating something out of passion the result often holds a rare quality â€“ that invaluable personal touch. Homemade cakes always look far more tempting than the mass-made produce found in Greggs, peopleâ€™s paintings are more eye-catching than cheap canvas prints and handmade Halloween costumes end up being more creative than those found in supermarkets. Last minute toilet paper Egyptian mummy costumes notwithstanding.

It so transpires this elusive personal touch can be found in video games. Stardew Valley represents four years of work by just one man, fuelled by a passion to create a Harvest Moon-style farming role-player for PCs. All because Natsume has so far neglected the platform, choosing to churn out Harvest Moon games exclusively for consoles instead. To call it an outright clone would be folly, however â€“ there are traces of Animal Crossing, Minecraft and Terraria present too, all combined with care and attention to form something created with undeniable passion. 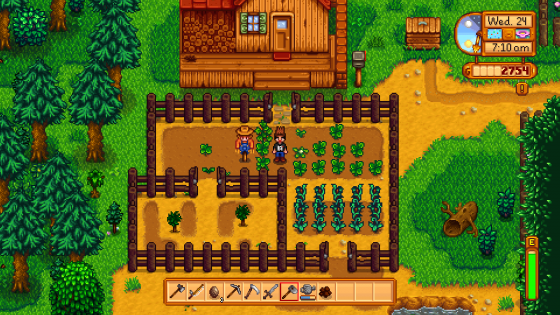 Developer ConcernedApe hasnâ€™t just carefully amalgamated the best bits of each franchise, but also refined and tinkered with individual elements to make the experience as streamlined and accessible as possible. On top of this, the plot â€“ or premise, rather â€“ also appears to have stemmed from the heart, entailing an unappreciated office worker leaving his cramped cubical behind in favour of living the rustic lifestyle at his late Grandfatherâ€™s farm. Harvest Moon veterans will instantly recognise the set-up â€“ your new life starts with just a small sum of cash, a single packet of seeds and basic tools.

The farm is also in great disrepair, and so the first port of call â€“ aside from making yourself known to the neighbourhood â€“ is to clear away the tree stumps and stones to make room for crops.

Thereâ€™s a day and night cycle in place, and at the end of each day everything thrown in your shipping container is taken away and payment then added to your account. Crops turn a steady profit, taking several days to grow, while the wilderness provides a bountiful amount of produce that can be foraged for free. Flowers, berries, wild vegetables and more are ripe for the takingâ€¦or can be given to the townâ€™s residents to try and improve your standing. Like Harvest Moon before it, thereâ€™s a focus on trying to woo a potential partner by handing out gifts. 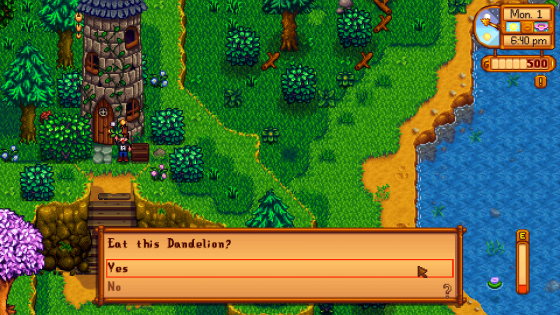 Each character has a distinct JRPG-esque personality, from grumpy teens to sweet old ladies. It didnâ€™t take long at all to gain a fondness for the townâ€™s homeless man, shown rummaging through peopleâ€™s bins during one early cut-scene.

Townsfolk often request a helping hand, asking for a certain vegetable or assistance in finding a lost item. This is Stardew Valley at its core â€“ it provides dozens of things to do and focus on, and then throws a few additional odd jobs and distractions your way. Before you know it youâ€™ll have a lengthy â€˜to doâ€™ list to crack on with, with the added bonus of the occasional surprise and unexpected set-piece. In every location thereâ€™s something to distract from tending to the potatoes.

Although your custom picked protagonist has far more stamina than a typical Harvest Moon hero, there still isnâ€™t enough hours in the day to get everything done. Forward planning helps, but even then, itâ€™ll probably be time for bed before youâ€™ve managed to tour the whole town. 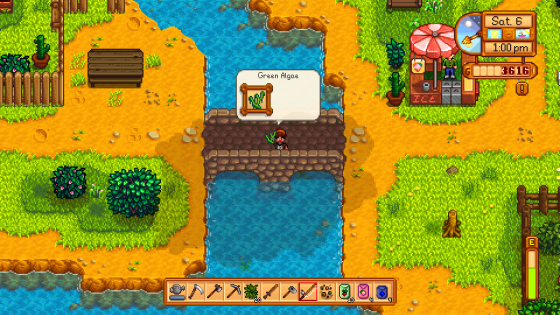 A typical day usually entails watering and gathering crops before heading out to forage in the wilderness, followed by a trip back to the farm to empty your probverbial pockets. Backpack space is limited, see. The rest of the day can then be spent planting additional crops, shopping, fishing, mining or milling about with townsfolk.

The town has several stores, including a supermarket run by a bullyboy corporation, a museum â€“ in which pieces can be donated, a la Animal Crossing â€“ and a bar with a playable arcade machine. The twin-stick shooter found here is almost deserving of its own review, featuring power-ups and a faithful 8-bit art direction.

Both fishing and mining could be classed mini-games too. Fishing is a little tricky at first but soon becomes second nature, requiring the A button to be both bashed and held down in order to fill your pockets to the brim with bream. Mining meanwhile has a hint of Rune Factory and Terraria to it thanks to featuring combat: bugs, monsters and familiar looking slime creatures lurk amongst the treasures underground. Thereâ€™s even a warriorâ€™s guild in which equipment can be purchased and quests taken on, thus adding a neat traditional RPG slant. 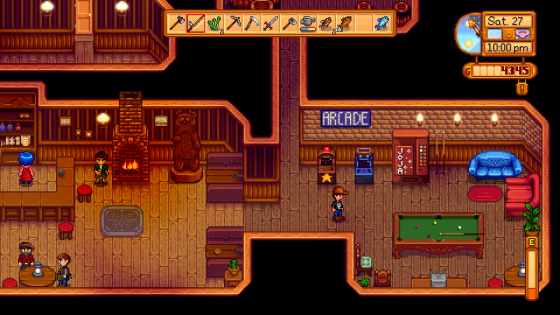 It isnâ€™t just the diversity of the daily grind that impresses, but also the size of the town. Exploration is wholeheartedly encouraged and over time new areas open. Youâ€™ll also come across locations that are inaccessible, along with the occasional cryptic clue suggesting how to gain access. On top of all this, thereâ€™s a sub-plot involving the disused town hall.

The vast difference between seasons shows how impeccable the pixel artwork is, with each featuring different fauna and flora, rendering some locations almost unrecognisable. Music changes per season likewise â€“ an assortment of pleasant ditties that play on rotation, as not to grate. 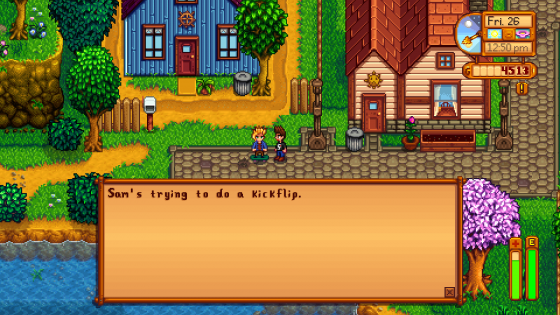 Weâ€™ve long wondered if publishers really know what gamers want, simply releasing similar products to whatever is successful and making money at the time. Stardew Valley single handily proves that some publishers are indeed out of touch with their audience â€“ Harvest Moon is the strongest card in Natsumeâ€™s deck, but instead of giving us games that take us back to the franchiseâ€™s roots theyâ€™ve spent the last few years sending the series down the wrong path. All fans really wanted was a good, old-fashioned, 16-bit style farming RPG. Starew Valley is like Harvest Moon born again; the reboot Natsume never thought to give us.

With this console release, everybody has the chance to go back to basics. On Xbox One in particular – a system the Harvest Moon series has also managed to elude – itâ€™s like a fresh breath of countryside air. Breathe it in, chaps â€“ thereâ€™s no waft of publisher bullshit here. Itâ€™s an experience as humble as they come.