Tennis in the Face is about a rebellious player, and thereâ€™s only one of those around at the moment â€“ Nick Kyrgios. Like that player, this game doesnâ€™t take itself too seriously. Take the main characterâ€™s name for instance – Pete Pagassi, which is clearly a pun on Andre Agassi and Pete Sampras. Right off the bat this prompted a chuckle.

Laughing aloud was a common theme while playing through this Â£3.99 download. The story entails an ex-pro tennis player who becomes a kindergarten teacher. Then, said teacher decides to rob energy drinks from the aptly named company Explodz. Pete blames his actions on the drink and is determined to rid the world of the stuff. To do this he must get through his city first, which is embroiled with a range of different daft characters who are addicted to the sugar-loaded beverage.

Essentially, Tennis in the Face is a puzzle game where you must knock out enemies (which consist of clowns, policemen, villagers, and others) to reach the ultimate goal – destroy the Explodz factory. 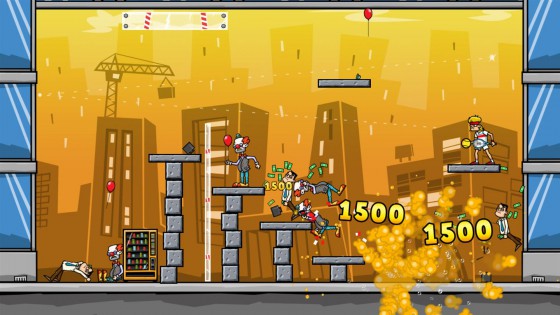 Tennis balls act as ammunition â€“ in addition to the occasional can of Explodz – and your finishing move is your killer serve. Your aiming precision is called into question as you must bounce shots off walls, random edges, extra tennis balls, clumps of metal and even Explodz drinks machines to knock your foes back to reality.

Thereâ€™s a very Angry Birds feel to it, and like that game, itâ€™s easy to spend ages earning a 3 star rating on every level.

One of the biggest problems is how some of the harder stages feel as if they require more luck than skill to knock the enemies out. Another flaw is the lack of variation. Other than a slightly different layout and a few extra foes, every level and mini-game is pretty much the same. Undeniably though, and again much like Angry Birds, the formula can prove incredibly addictive. 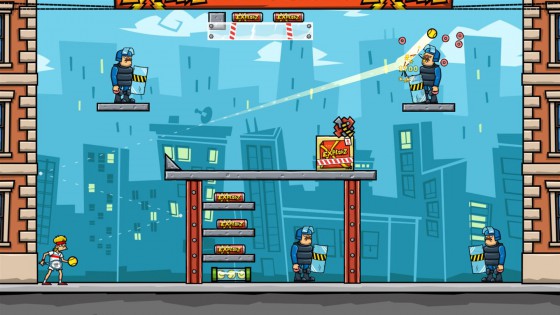 We wouldnâ€™t go as far as saying that Tennis in the Face is challenging as you donâ€™t need to be particularly skilled to work out the right place to start your serve. You will need to demonstrate high levels of resilience, though, as some levels take numerous attempts to beat and bag all 3 stars. While itâ€™s possible to finish the whole thing in around 3 hours, the Â£3.99 asking price reflects the length. Also: the gameâ€™s budget. It doesnâ€™t push the Xbox One at all. It does look crisp and everything moves smoothly though.

Simply put, if you didnâ€™t enjoy Angry Birds then donâ€™t bother getting this. But if you want to be told an amusing tale while solving puzzles along the way, then Tennis in the Face is well worth a few of your English pounds.