Road trip adventure Final Fantasy XV is off to an excellent start, becoming the second fastest-selling title in the series behind 2010â€™s FF XIII. It wasnâ€™t able to dislodge FIFA 17 from the top of the UK chart, though, settling for #2 instead.

Unsurprisingly, the PS4 version was the biggest selling. It takes #1 in the individual format chart, with the Xbox One iteration at #14. Thatâ€™s a pretty large gap. 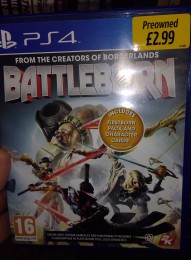 Watch_Dogs 2 holds onto #6, Uncharted 4: A Thiefâ€™s End moves up one position to #7 while Pokemon Moon and Sun occupy #8 and #9 respectively.

Minecraft: Xbox One Edition then rounds of this weekâ€™s top ten.

The next highest new entry after FFXV is Ubisoftâ€™s Steep at #24. Chart-Track claims itâ€™s the fourth fastest-selling winter sports game, beating SSX Tricky. Maybe if Ubisoft had sorted out some pre-launch reviews it would have fared a little better.

The 3DSâ€™s Super Mario Maker made #25. 7th Dragon III Code VFD and Shin Megami Tensei IV: Apocalypse missed out on top 40 positions, and by quite some margin it seems â€“ they entered the 3DS chart at a lowly #26 and #40 respectively. Picross 3D Round 2 meanwhile made #29 in the 3DS top 50.

Going back to the UK top 40, Minecraft: Story Mode â€“ The Complete Adventure showed its face at #32 while Battleborn re-entered at #40. The Borderlands alike was spotted on the high street for as little as Â£5 last week. Also: Â£2.99 pre-owned at GAME.