We donâ€™t know what the average life expectancy for a videogame magazine is, but we imagine itâ€™s nowhere near #300 issues.

UK publication EDGE reaches this landmark this month, and as such looks back at the industry since the first edition hit newsstands in 1993. 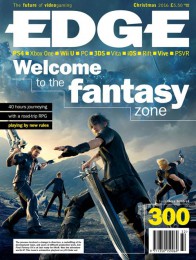 This includes the 10 most important innovations of EDGEâ€™s time, the best games in EDGEâ€™s history and a look at all 300 covers, complete with some surprising statistics. Contrary to popular beliefs, EDGE isnâ€™t biased towards games made in the UK â€“ the majority of EDGE covers have featured games of a Japan origin. 103 Japanese games compared to 49 UK titles, no less.

Kotaku UK has posted an extract from an EDGE #300 feature, in which five renowned developers were asked to pick their best games of magâ€™s lifetime. Itâ€™s well worth a read.

In addition to celebratory features, issue #300 has a â€˜Making ofâ€™ Shovel Knight, a retrospective on Nier and a preview of Final Fantasy XV â€“ this issueâ€™s cover game. The team managed to squeeze in some Nintendo Switch impressions before hitting the presses, too.