This top-down dungeon crawler is reminiscent of ZHEROS, a previous Xbox One â€˜Games with Goldâ€™ freebie. ZHEROS â€“ one of the lowest scoring games of 2016, we might add â€“ promised to be a scrolling brawler influenced by Saturday morning cartoons. An appealing premise, but after a reasonably humorous intro the brightly hued presentation emerged to be nothing but a faÃ§ade â€“ the game itself was soulless, with very few attempts at humour or to even give the main characters a hint of personality.

Super Dungeon Brosâ€™ vibrant CGI intro introduces us to the titular heavy metal obsessed fellows â€“ Axl, Lars, Ozzie and Freddy – who embark on a legendary quest after finding a mystical, talking, vinyl record in a bargain bin. Itâ€™s a fun and inviting set-up, with the bros having a rather pleasing action-figure look to them and a similar sense of chemistry to the Ninja Turtles.

This too quickly emerges to be nothing but a ruse; a bait and switch, if you will. This dungeon crawl is as generic as can be with skeletons, undead knights and mages making up the enemy assortment, and the usual mixture of swords, hammers, magic wands and crossbows to vanquish them. Why the bros couldnâ€™t use their axes (guitars) as literal axes is beyond us. 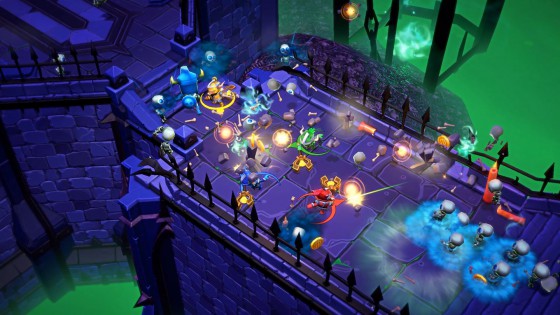 Developer React Games has failed to even put the premise into use in the most obvious of places: instead of heavy metal a dreary and monotonous melody plays in the background. Alternatively, thereâ€™s a dubstep soundtrack which â€“ we kid you not â€“ will set you back a few extra quid as itâ€™s DLC.

There is at least a hint of chemistry to the four characters, in the sense that theyâ€™re able to join up and perform a devastating whirlwind attack. They can also pick up and carry one another, a mechanic sometimes used in puzzle solving that can also make platform jumping easier for players struggling with the occasionally irksome viewpoint.

Experienced players can, quite literally, carry the team. This is also handy for when an online player suddenly vanishes, preventing you from having to wait while they search for a joypad charger cable (or return from the toilet). Random observation: online etiquette isnâ€™t what it used to be. 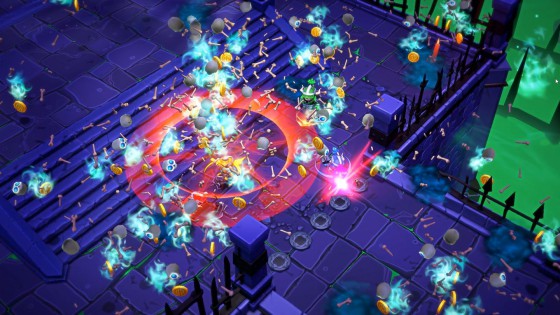 Now hereâ€™s where Super Dungeon Bros completely falls to bits â€“ both the single and multi-player modes are fundamentally flawed in their own unique ways. If the multi-player was good, and the single-player mode poor, we could have begrudgingly lived with that considering itâ€™s a co-op focused affair. But no â€“ it messes up both modes up spectacularly.

Experienced players can, quite literally, carry the team

Keeping with the â€˜bromanceâ€™ (sorry) theme, the idea is to revive fallen bros before a counter reaches zero, or else a life is taken from the pool that all four players share. When playing on your lonesome, thereâ€™s nobody to come to your rescue and so the stock of extra lives soon depletes. Itâ€™s punishing to the extreme and consequently feels like a slog. Even after unlocking better weapons â€“ which lazy gamers can choose to buy instantly via microtransactions â€“ the difficulty level still feels unbalanced.

When playing online problems are apparent right from the outset. Thereâ€™s no drop-in-drop-out play, no ability to search for matches, and before a game can commence three players are required. In other words: you canâ€™t play online with anything less than a full squad of bros. Waiting ten minutes and upwards to find three additional players isnâ€™t uncommon. 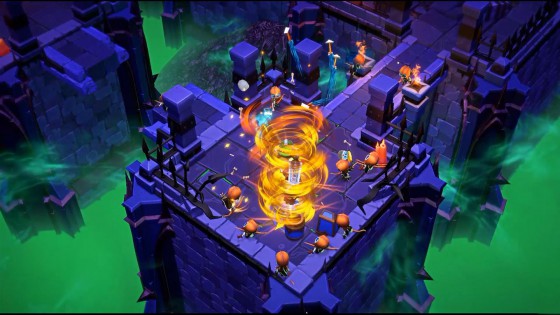 When an online game does finally commence, the experience is far from smooth. Over the course of several days we regularly experienced lag and screen stuttering. More importantly, the screen scrolls in an irregular manner requiring you to get right to the edge before it starts to move. All four players must be on the same screen at once, so thereâ€™s no scope to wander off. This isnâ€™t a problem as such, but players that get left behind while others dash off often find themselves surrounded by enemies, or stuck behind obstacles, while the screen judders in a nauseating fashion. Before you know it another life has been taken, and chances of reaching the dungeon boss fade further.

the amount of squandered potential is staggering

Amazingly, it gets worse. Presumably because the pressure plate puzzles require a minimum of three bros (to the best of our knowledge), if more than two players leave a game youâ€™re abruptly thrown back to the title screen and told that â€œYouâ€™ve been ditched by your brosâ€. We once reached the fifth and final floor of a dungeon, a task that took around 40 minutes, only for this to happen. With no checkpoints, save progress or anything of the sort, weâ€™d effectively wasted our time â€“ each of the three dungeons must be completed in a single run, from start to finish.

To top it all off, the randomised nature of the dungeons occasionally results in areas that canâ€™t be reached â€“ myself and another player once became stuck on a small platform, leaving us no choice but to quit.

The sensation of playing a game for several evenings and progressing nowhere (we gave up on playing on our lonesome after the second evening), ultimately voids the small amount of enjoyment Super Dungeon Bros had to offer. Like ZHEROS before it, the amount of squandered potential is staggering.