The success of the original Ghostbusters movie came as a surprise to many. As such, there wasnâ€™t a huge number of promotional items and licensed products released alongside the 1984 comedy classic.

The marketing men soon rectified this for the sequel, and by the time The Real Ghostbusters cartoon aired it was possible to buy just about anything with the iconic Ghostbusters logo slapped on it. This included handheld LCD games, of which there was a surprisingly high amount. 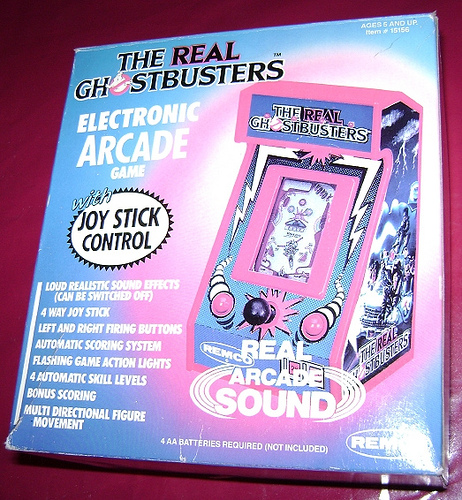 Weâ€™ll start with Remcoâ€™s The Real Ghostbusters Electronic Arcade first, as this mini-arcade cabinet is noteworthy. Firstly, it was released only in Italy. Secondly, the box art shows the wrong display â€“ an image of what appears to be a Robotech (Macross) LCD game is shown on the main screen, with a large mech taking centre stage. The actual game takes place in a cemetery with Peter Venkman precariously perched on top of a crypt. Enemies attack from all angles which Venkman must, quite obviously, vanquish before they reach him. Amazingly, thereâ€™s a degree of innovation present â€“ Venkman can hide in the crypt for a few seconds. Any more than that though and his air supply will run out, prompting the smooth-talking spook hunter to roll into an open grave. 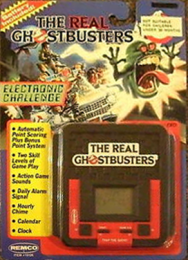 Remco went on to release a mini-arcade LCD pinball game, likewise based on the Ghostbusters cartoon. This shared some features of the Electronic Arcade game, including a row of flashing red LEDs and similar artwork on the cabinet itself.

Remcoâ€™s involvement with the Ghostbusters license didnâ€™t end there: they also released two, smaller and somewhat generic, LCD games in 1988. Collectors often overlook the fact there was two as they were almost indistinguishable. Look a little closer though, and youâ€™ll see that one had a subtitle â€“ Trap the Ghosts â€“ printed at the bottom of the handheld in small text. Both feature Peter Venkman as the sole playable character again. The backdrops are however different â€“ one takes place outside the GBâ€™s firehouse, while the other has a nondescript American street as a backdrop. In both instances, players were treated to a rather blatant clone of Space Invaders.

Taking a leaf out of Nintendoâ€™s book, both doubled up as an alarm clock, complete with a pull-out stand on the reverse. In one of the recent Ghostbusters comic books the handheld can be seen on Peterâ€™s desk. How meta. 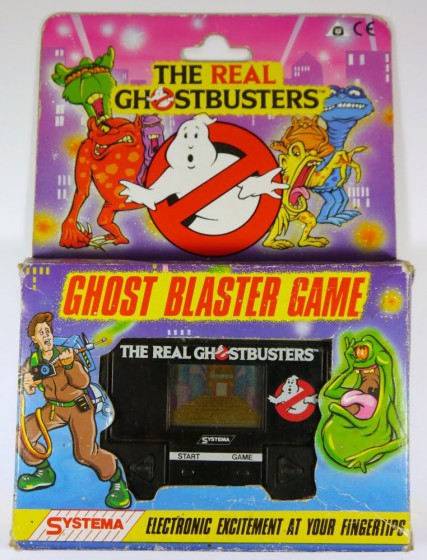 Systema â€“ who released some Tiger handhelds in the UK, and was also renown for producing games in bizarre boxing glove shaped cases â€“ also managed to get their hand on The Real Ghostbusters license. This resulted in a small black handheld catchily known as Ghost Blaster Game. There isnâ€™t much to say about this one, other than the fact that it peculiarly featured â€˜London Bridge is Falling Downâ€™ as its main theme.

The game itself was equally lazy, again recycling the tired Space Invaders formula. Stairs to what appears to be either a court room or a museum provide the setting. Considering both locations featured in Ghostbuster II itâ€™s hard to be 100% certain.

Japan had their own handheld game, this time officially based on Ghostbusters II. Released by Pack-In Video in 1989 (under sub-license from Activision) itâ€™s very desirable amongst fans and can sell for as much as Â£100 nowadays. The action takes place in New York Central Park, and Ray appears to be the protagonist. More creative than most, the aim is to fight ghosts, collect toys and keep baby Oscar safe, all while ensuring the proton pack has enough juice to keep playing. 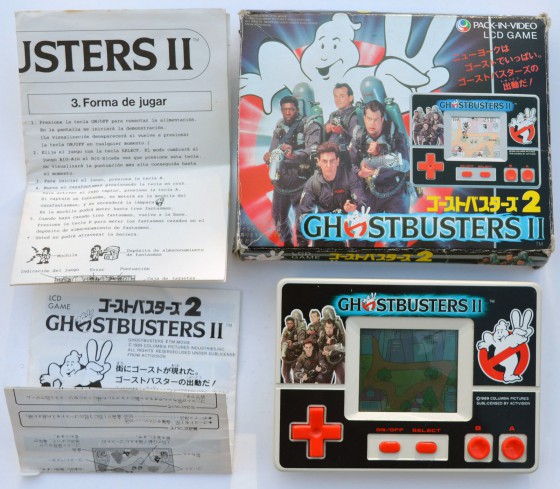 Although a Japanese-only game, the case is clearly based on the western NES controller. The connection presumably being that the Ghostbusters used a NES Advantage to control the almighty Statue of Liberty. A little tenuous, weâ€™ll agree, but itâ€™s the best connection we can think of. 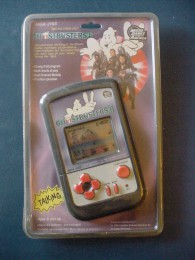 In 1990, Micro Games released a talking Ghostbusters II handheld as part of their Micro Games of America line. Other licensed games in the range included Robocop 2, Star Wars, SWAT Cats and Babylon 5, all of which featured identical casing not entirely dissimilar to the original Game Boy.

This one centred around a battle against Vigoâ€™s painting, with the idea being to destroy it before the Scourge of Carpathia grew too powerful. As much as weâ€™d like to tell you what speech samples it featured, a lack of information on the internet has put the end to that.

We did however find this amusing clip of Micro Gamesâ€™ Star Wars handheld, which is perhaps a good indication of the amount of effort Micro Games put into these things. 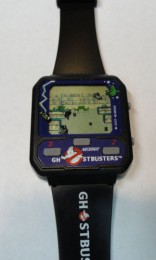 Finally, we have a Ghostbusters LCD wristwatch game from Nelsonic. Although it appears to tie-in with the original movie, due to featuring a library as a backdrop, itâ€™s based on The Real Ghostbusters.

Itâ€™s a pretty simplistic shooter in which ghosts emerge from the top of the screen and throw books at our hapless hero. This too is desirable with fans due to its rarity; finding one with the original rubber strap is a tricky task.

Nelsonic released a large range of LCD watch games in the ’80s and early 90s, most of which were based on Nintendo characters. Even the common models can sell for as much as Â£50 on the likes of eBay.

Surprised that there wasnâ€™t a Tiger Ghostbusters game? Us too. It seems they were perfectly content with peddling a rather cheeky knock-off, entitled Ghostblaster. 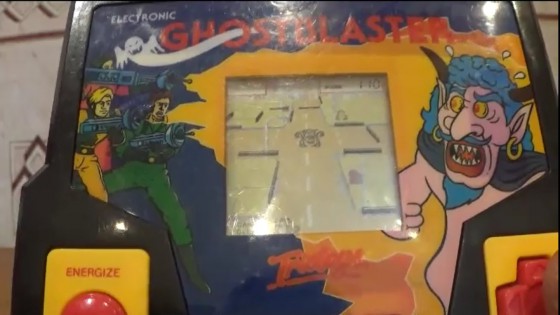 Who you gonna call? Probably not these fly by nighters.