Somebody wise once said that if youâ€™re going to rip off a videogame, make sure itâ€™s a good one. Itâ€™s equally wise to ensure that it has enough quirks and unique features to have its own merits. In this day and age of mass internet backlashes, accusations of plagiarism can get rather messy.

Thankfully developer Fat Shark â€“ of Bionic Commando Rearmed 2 and Escape Dead Island fame â€“ has ticked both fictitious boxes. To say that Vermintide borrows heavily from Left 4 Dead would be an understatement, focusing on four-player co-op and featuring a very similar level structure. It even has a range of enemies with near identical attacks to Valveâ€™s festering special infected. The enemies in Vermintide arenâ€™t undead, however â€“ theyâ€™re bipedal ratmen, who swarm and surround the lead heroes in great number. Common vermin go down with just one or two sword swipes or a shot to the head, sending limbs flying and black blood spewing in a satisfying manner, while stronger enemies require charged attacks to fell.

This is where Vermintide starts to take its own form. It favours melee combat over ranged, with each of the five characters â€“ another standout â€“ bringing an axe or sword into battle. A dice-based loot system puts another welcome spin on things, granting new weapons upon successful completion of a mission. Weapons can then be upgraded, melted down for raw materials or re-forged when back at the Inn â€“ the gameâ€™s hub, which also doubles as the online lobby. 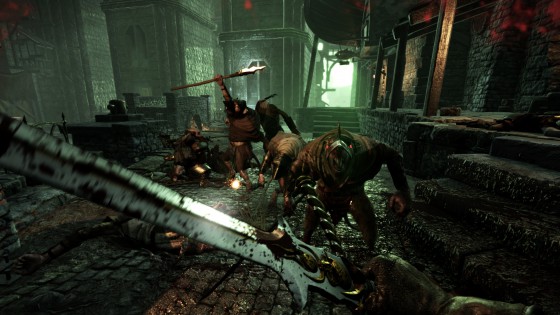 The innkeeper â€“ a chubby moustached fellow â€“ provides mission objectives, in lieu of a commanding general or similar. These are dark days and few are left standing, with much of the medieval city left in ruin. Our heroes are amongst the few survivors, using a mixture of might, metal and magic to survive. Also: Gunpowder â€“ firearms feature in addition to crossbows. There isnâ€™t much incentive to swap between characters as thereâ€™s no class system in place, but itâ€™s still likely that youâ€™ll find a favourite and want to stick with them.

Burly dwarf Bardin attacks with clear-cut, almost clinical, precision while pyromaniac wizard Sienna can extract bolts of fire from her torch. Theyâ€™re joined by a nimble wood elf, a noble knight and a one-eyed witch hunter, making for a remarkably well-balanced â€“ and likeable – team. Unlike some co-op shooters we never felt at a disadvantage when forced to play as a lesser used character.

Taking another leaf out of Valveâ€™s book, our five heroes are extremely talkative, full of sharp quips and compliments for heroic feats. Come across a stash of health kits, bombs and potions and theyâ€™ll automatically alert others to their location; a small touch that goes a long way in ensuring survival. Health kits are often in short supply, which is clearly deliberate â€“ part of working as a team is to share kits and heal others using your own stash. If the whole team goes down, itâ€™s game over. In the absence of checkpoints, itâ€™s then up to the team to vote on starting the mission over, trying a different stage or heading back to the Inn.

Missions generally take around 30-45 min each, and we can thank fancy current-gen tech for the size and length of each stage. Theyâ€™re a decent mixture of inside and outdoor locations, with each having a suitably eerie feel and subtle uses of fog to hide what lurks ahead. Moreover, the environments look great â€“ thereâ€™s an almost CGI quality to the visuals, with some very tidy texture work present. And although a lack of destructible objects does give the game world a slight lifeless feel, itâ€™s a moot point. The castle and sewer missions provide a very claustrophobic experience in comparison to the multi-pathed city stages. 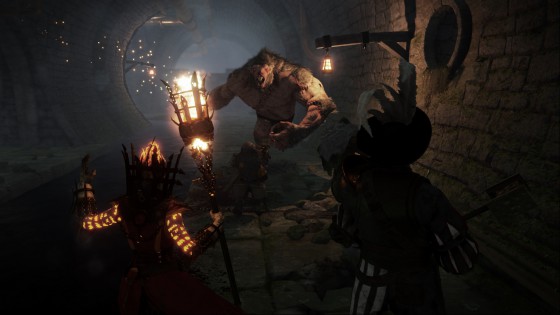 Each mission has a unique objective that makes them instantly recognisable too, from savaging for food supplies to preventing water wells from being poisoned. The randomised placement of ratmen further helps to keep things fresh, complete with ambushes from the city rooftops and the occasional battle against colossal Ogre rats. Stray away from the team and the Packmaster rats will step out of the shadows, dragging you away from teammates before leaving you to hang from a noose. This alone is enough to retain a constant state of high alert.

Itâ€™s keeping interest levels held for long periods that Vermintide struggles with. One piece of loot per mission seems stingy when compared to similar games, and although there does seem to be some kind of experience-based algorithm to the matchmaking itâ€™s in need of adjusting. Having spent a week with Vermintide, weâ€™ve had to slog through the prologue mission numerous times in hope that one of the later missions will appear next on the roster. In the grand scheme of things though these missteps are pretty trivial, and a custom search facility is available for both the campaign and the wave-based survival mode.

Vermintide offers a compelling co-op experience, and one thatâ€™s more than worthy of rubbing shoulders with the AAA titles and big budget shooters out there.