Sony enforced tight quality control during the PSoneâ€™s early years. 2D games in particular were in the firing line, with Sony cherry-picking only those that showed off the system such as Rayman, Rapid Reload and Mortal Kombat 3. Itâ€™s often stated that Sony didnâ€™t want any 2D games on the system, believing they didnâ€™t show off the consoleâ€™s capabilities, but this wasnâ€™t the case. They simply didnâ€™t want developers to lazily re-release their 16-bit games with few, or even zero, improvements.

Sony adopted a more relaxed approach after the console established itself as a runaway success, turning a blind eye to tardy conversions and even going as far as lowering licensing fees for third-parties. This allowed publishers to release Â£9.99 budget games on the system, with one of the first â€“ if not the first â€“ being Take-Twoâ€™s Twisted Metal alike Grudge Warriors.

All five publishers continued to release budget games right into the systemâ€™s twilight years. Play Itâ€™s Robocod: James Pond II and Take-Twoâ€™s Celebrity Deathmatch even managed to make the cover of The Official PlayStation Magazine. In fact, the majority of games reviewed during the last year or so of OPMâ€™s publication were Â£9.99 titles, most of which reviewed poorly. Titles by Phoenix Games in particular rarely scored higher than 3/10, with the majority gaining 1/10 review scores.

Quality Â£9.99 games were sadly far and few between; something that became more than apparent when compiling this list. When the likes of Midas did publish a decent budget buy though, it felt all the more special â€“ a shining beacon in a sea of mediocrity. Itâ€™s time to explore the murky waters of PSone budget games. Thereâ€™s no need to watch your step â€“ weâ€™re looking at the good stuff today.

Phoenix Gamesâ€™ output mostly consisted of interactive colouring-in books based on â€˜mockbusterâ€™ cartoons, amateurishly animated by Dingo Pictures. If you regularly watch gaming shows on YouTube youâ€™ve doubtlessly heard of them before, being the overused source of ridicule that they are.

Before Phoenix began churning out utter crap they dabbled with conversions. The castle crushing Ballerburg made the jump from PC via Ascaron (who went on to create the Sacred franchise), while top-down RTS Baldies made its way from the Atari Jaguar CD, of all systems. 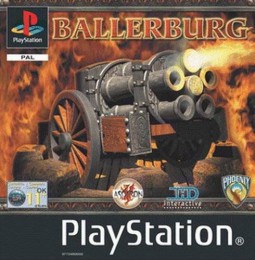 Ballerburg â€“ known as Ballerburg: Castle Chaos in the US – was the better of the two, hence why it made this list. The phrase â€œdonâ€™t judge a book by its coverâ€ rings true here. It may have resembled an incredibly niche and detestably po-faced PC game, but it was actually pretty light-hearted. This was all down to the vast amount of sexual innuendo spurned from the battle narrator â€“ a cloaked executioner. Think along the lines of a medieval Leigh Francis. It comes off as crass nowadays, but back in 2003 it proved to be mildly entertaining. Like Leigh Francis.

The idea was to raze the oppositionâ€™s castle to the ground by aiming and firing a mixture of cannons and catapults, taking wind speed and direction into consideration. Over time more ways to mangle unlocked, including zeppelins that could generate thunderstorms. Resource management played a part too, due to the ability to place cash-generating buildings on the battlefield. It achieved way more than Team 17â€™s brief voyage into 3D Worms games ever did.

Known as the cringe-inducing Runabout 2: You Own the Road in the US, this sequel to 1997â€™s Felony 11-79 didnâ€™t make it to Europe until 2003, some four years after launching in Japan. Thatâ€™s after Super Runabout: San Francisco Edition on Dreamcast and Runabout 3: Neo Age on PS2, both of which had different publishers â€“ Virgin Interactive and Bam! respectively. 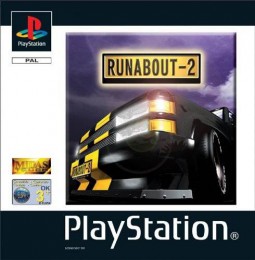 In fact, not one of the five Runabout games had the same publisher. As for the Runabout 2â€™s four-year delay, all signs point to no publishers wanting to touch it, leaving Midas to swoop in and pick up the rights at a bargain price just before the PSone faded away in 2003.

The crash and smash racing series is known for being dumb but fun, offering a very arcade-like experience. This lead to every single Runabout game receiving mixed reviews, save for the Dreamcast version â€“ as a system rife with arcade conversions, games like Runabout were its bread and butter.

This sequel is a pretty typical one, in the sense that it doubled the number of missions â€“ time-based dashes across bustling cities during both day and night – and featured improved visuals. More vehicles, too, including a sci-fi robot tank suspiciously similar to that from the Japanese movie Gunhed.

Itâ€™s a mystery how Midas Interactive and XS Games both ended up releasing Prism Land Story in Europe. Midas published the Breakout/Arkanoid/Alleyway alike in 2000 under the guise of Prism Land, while XS Games dusted it off for the second time in 2003. 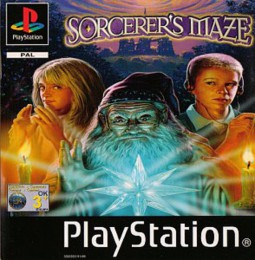 XS Games clearly aimed their rendition at the Harry Potter crowd, complete with a front cover featuring a bearded wizard not dissimilar to Dumbledore.

Anybody expecting a spell blinding adventure full of magic (or indeed mazes of any description) was in for disappointment â€“ it featured brightly coloured anime-style characters, including a bipedal feline as a lead character. Imagine sitting down to watch Harry Potter and the Sorcererâ€™s Stone on DVD, only for Spirited Away to start playing.

This brick breaker was notable for a few reasons. Firstly, it proved that the PSone could throw numerous 2D images around without the action crawling to a standstill. Secondly, the power-up system lobbed convention out the window. Instead of losing the effects of a power-up when collecting another, all previous powers would remain. Bigger bats, bigger balls and multi-balls â€“ this game let you have your cake and eat it. A two-player mode rounded off the package nicely.

Had Play It wished to release James Pond on PSone early in the systemâ€™s life, Sony would have probably laughed them right out the door. In 2004 though, it was a free for all. It perhaps helped that this wasnâ€™t a lazy conversion of the Mega Drive original â€“ it was the superior Amiga CD32 version, with a CD-based soundtrack and a new (albeit horrifically rendered) animated intro. 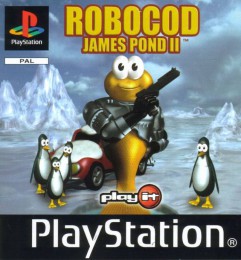 Out of all three James Pond games â€“ four, if you count spin-off The Aquatic Games â€“ Robocod is by far the best, with Santaâ€™s toy factory acting as a large hub world filled with secrets.

Level design differed from other platformers. Rather than having long and linear levels to navigate, the factory â€“ with its sports, board game, building block and cuddly toy themed backdrops â€“ was filled with maze-like rooms full of branching paths and hidden areas galore. You could even say that they erred on the claustrophobic â€“ the low ceilings, for want of a better definition, didnâ€™t always leave much room for Pond to manoeuvre.

This is where Pondâ€™s Robocop-style metallic suit came into play, allowing him to stretch vast heights to shimmy over pits and rows of spikes. It was an entertaining mechanic that remains pleasurable to play around with even now. Pond could also jump into cars, planes and â€“ oddly â€“ a bathtub to get around the colourful worlds quicker.

Two years later Play It revisited Robocod again, serving up the fishy fellow on PlayStation 2 and Game Boy Advance. The PS2 version did away with the animated intro, opting for the original opening sequence instead. It was probably for the best.

If the name Gunbird 2 rings a bell, then youâ€™re probably more than a little familiar with the Dreamcastâ€™s back catalogue. The Psikyo developed vertical shooter was published by good old Capcom in all three territories, gaining mostly glowing reviews upon release.

This was back in the space year 2000. Three years later, the original Gunbird finally saw light of day in Europe and the US thanks to XS Games. Thatâ€™s to say, the sequel was released before the original in the west. 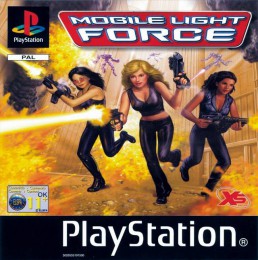 As a budget release, XS felt the need to rebrand the shooter as Mobile Light Force and aim it at a casual audience. And so the Mobile Light Force series was born, with the PS2 â€œsequelâ€ being a completely unrelated game – Shikigami no Shiro.

Thankfully, what was left was still pretty good â€“ a colourful and energetic top-down shooter with a decent soundtrack. It was soon rendered a pointless conversion due to Empire/Xplosivâ€™s releasing Gunbird Special Edition on PS2, but at the time it wasnâ€™t a bad way to blow Â£9.99.

The problem with many budget games was that there was always a low cost, and much better, alternative available due to the PSoneâ€™s Platinum range and vast second-hand market.

As the above examples have proven, itâ€™s the games that tried to provide something different â€“ or had a whiff of originality about them â€“ that stood out from the incredible amount of shoddy racing games, lacklustre beat â€˜em ups and terrible sports sims. Hello, Chris Kamaraâ€™s Street Soccer. 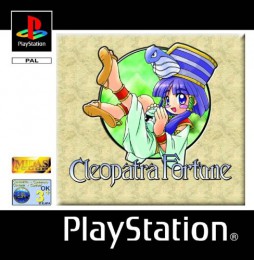 Puzzle games made ideal budget fare due to their simplistic nature, with Taitoâ€™s Cleopatra Fortune being one of the best.

The series even went on to spawn a Dreamcast sequel, powered by SEGAâ€™s NAOMI board, and was also released on SEGA Saturn around the same time as on PSone.

On first glance, Cleopatra Fortune resembles the offspring of Tetris and Columns. It played like neither however, as the idea was to surround treasures â€“ including gems and statues â€“ with solid blocks, as if they were being completely buried. Once surrounded theyâ€™d then vanish, with plenty of scope for creating chains and combos. The presentation had an Egyptian theme, of course, with Cleopatra herself dancing away on the left-hand side of the screen. Midas Interactive even had the decency to leave the cutesy box art intact, instead of opting for the Egyptian sarcophagus that US publisher Mad Duck Productions chose.

It was a close call between top-down shooter Starfighter Sanvein and Cleopatra Fortune for the last place on this list, but Cleopatra pipped it. A puzzler fit for a pharaoh.