This leaves us with just three 3DS titles. Chase: Cold Case Investigations – Distant Memories should be worth a look, though. Itâ€™s developed partly by staff from the now defunct studio CiNG, best known for Hotel Dusk: Room 215. The story sees two detectives reopen a five-year-old case that involved a fatal explosion.

Handily, Nintendo Points can be redeemed against it. For 20 Gold Points and it can be yours for Â£4.80, instead of Â£6.

Then we have Disney Magical World 2 (Â£34.99) which also gets a retail release this week. The six themed worlds include Frozen, The Little Mermaid and Lilo & Stich and you can also harvest a field with Winnie the Pooh and go fishing with Donald Duck. A highly comical experience, no doubt. 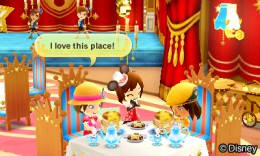 Finally, thereâ€™s Circle Entertainmentâ€™s retro RPG Ash (Â£3.99). Nintendo Life gave it a miserable 3/10 due to a game breaking glitch which forces the 3DS to reset, so consider yourself warned.