The PlayStation 2 was such a success that it became viable for publishers like 505 Games â€“ then known as 505 GameStreet â€“ Phoenix Games, Midas Entertainment and D3 Publisher to release cut-price budget titles on the system.

Even a few of the larger software houses, like Capcom, Ubisoft and Atari, got in on the action, with their deeper pockets allowing for licensed products. Or licensed tat, as was often the case. 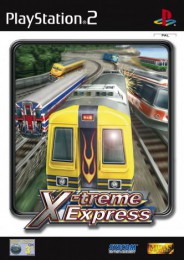 Many of these releases suddenly appeared on store shelves with no flashy trailers, pre-release hype, pre-order incentives or anything of the sort. Walking into GAME and finding a mysterious new release on the shelves wasnâ€™t uncommon and is something we miss dearly, especially in this day and age where most upcoming releases are overexposed, if anything.

Supermarkets apparently loved Â£9.99 games as their low cost made them impulse purchases and put them in the same price range as DVDs and CDs. As such, many budget ranges enjoyed a long shelf life, occupying space alongside whatever hot new release was doing the rounds that month.

The vast majority of Â£9.99 games were conversions of old Japanese titles, often with their story lines removed to save on translation costs. They were usually re-branded with new names intended to appeal to the mass-market, too. 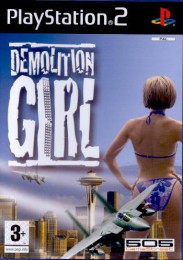 We also saw games that were once destined to be published by one of the big hitters but dropped due to a sudden lack of confidence, or a studioâ€™s demise. This allowed the likes of Midas and Play It to swoop in and pick up the rights at a cut-down price, with He-Man: Defender of Grayskull, The Red Star and Cel Damage Overdrive saved from the scrapheap after being dropped by TDK, Acclaim and EA respectively.

Most, however, were made on the cheap. Midas notoriously released the same racing game over and over again, changing only the vehicle types and â€“ obviously â€“ the title screen. For reasons we canâ€™t abstain, late in the PS2â€™s life board game compilations also became absurdly common.

We arenâ€™t here to talk about rubbish like that, though â€“ weâ€™re here to look at the good stuff. Weâ€™ll leave the dross for the YouTube boys. So letâ€™s take a look at the few budget games that were worth way more than their meagre asking price.

Just to prove how muddled the world of PS2 budget games was, weâ€™ll start with this Japanese vertical shooter. The first MLF was released on PSone, and was a conversion of the 1994 Psikyo shooter Gunbird. This PS2 â€œsequelâ€ was completely unrelated – Shikigami no Shiro, developed by Alfa System and published in Japan by good old Taito. Presumably, to save on costs, being a budget game and all, it featured the same embarrassingly poor box art as the original. 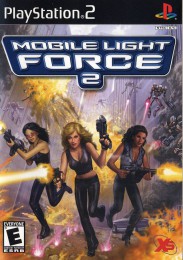 Bizzarely, the terrible box art did do the publisher a favour â€“ it was often the source of ridicule by the gaming press and gamers alike, and as such was frequently plastered around pre-Twitter internet. Free advertising for XS Games, basically.

General consensus had it that MLF2 was a pretty typical, or typically good, Japanese shooter. With enemies such as giant teddy bears and ballerina dolls it had a pleasing nonsensical streak, and the ability to gain more coins from flying up-close-and-personal to enemies added a neat risk/reward system. Sadly, though, the story was cut from the western version.

For the genuine sequel to Shikigami no Shiro, XS Games cast aside the Charlieâ€™s Angels lookalikes and stuck with a translation of the original title – Castle Shikigami 2.

European publisher Play It couldnâ€™t resist adding a nonsensical subtitle, though: War of the Worlds. The Tom Cruise remake of War of the Worlds was released the same year (2005), so that subtitle was definitely picked to maximise potential internet search results. Or so our theory goes, anyway.

Global Defence Force is another with a convoluted history, although somewhat easier to decipher. It was actually the second game in the Earth Defence Force series, with the first being released in Europe as Monster Attack and published by Age-Tec (via BigBen Interactive). 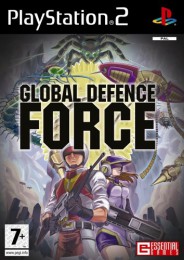 Any gamer worth their salt knows that the EDF games have a cult following, and with Monster Attack released in very limited numbers, itâ€™s likely that Global Defence Force sparked a passion for the still-running series for many.

We will, however, mention that this was released after EDF 2017 on Xbox 360 – the third entry in the series – albeit by just two weeks. As mentioned earlier, PS2 budget games have a very muddled history â€“ release dates between Japan and Europe were often years apart.

The EDF games are pretty easy to describe: destroy swarms of giant B-movie style monsters until theyâ€™re no more, levelling entire cities as you go. At the end of each stage a small assortment of new weapons unlocks, depending on the number of pick-ups found during a stage, with most weapons serving different purposes or suited to certain enemy types. Only two weapons can be taken into battle, adding a slight tactical slant.

Weâ€™ve always preferred GDF over EDF 2017 as this iteration featured a second female hero with a sci-fi weapon set and a nifty jetpack. EDGE magazine had a soft spot for this iteration too, awarding it a stonking 8/10.

Around a month after GDF was released in Europe, Essential Games (aka D3 Publisher) slipped out the hex-based Global Defence Force Tactics onto store shelves. Well, store bargain bins â€“ the first time I saw a copy was in Morrisons, thrown in a stand with a bunch of unsold DVDs and CDs. Such was the life of a budget game.

Sticking with supermarkets and budget game finds, you can imagine my surprise to find a whole shelf full of mysterious, completely unannounced, Â£9.99 PS2 titles when popping into my local Sainsburyâ€™s one evening. The initial run of Play Itâ€™s budget range comprised of Play It Pinball, Cel Damage Overdrive, Seek and Destroy and Road Trip Adventure, all of which were released on the same day with no press coverage whatsoever. 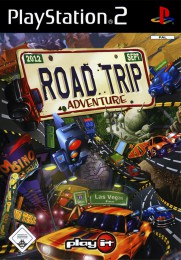 It was Road Trip Adventure that found its way into my shopping basket. By screenshots alone I was able to tell that it was a Choro Q title â€“ a Japanese racing series that features colourful toy-like vehicles. Like the name suggests, this was an adventure game rather than a standard racer. The ultimate goal was to become town president by completing simple quests for citizens (read: cars), filling a photo album with pictures from your travels and by winning the 20-odd mini-games present.

One of these mini-games was car football, beating Rocket League to the punch by a good decade. It gave you a whole bunch of missions and objectives, mostly of which were pleasingly daft, and basically let you get on with it.

Eurogamer gave it the retrospective treatment back in 2014, shortly after it gained a digital re-release on PS3. At a ridiculously low Â£1.99, would you believe? Bargain.

The PS2 didnâ€™t receive a great deal of top-down construction games â€“ Theme Park World and Jurassic Park: Operation Genesis are the only two that spring to mind. Also: Natsumeâ€™s Metropolismania and its sequel, although these are less about building and more about social networking. 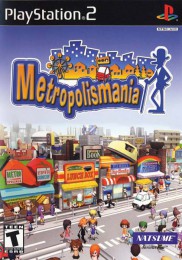 Unlike SimCity et al, Metropolismania bestows control of the townâ€™s mayor rather than a cursor or floating hand. Viewed from a third-person perspective, the idea was to talk to the townâ€™s citizens and ask them to open a business or invite their friends to move to the neighbourhood. After many garbled text-based conversations, tiny towns soon transform intoâ€¦less tiny towns. The restrictions of the PS2 sadly meant that huge sprawling cities were out of the question.

Being a Japanese title, Metropolismania is rich with that nation’s culture â€“ many of the shops and house are fashioned like those found on a typical Asian street, with noodle bars and small bookstores more than frequent. As such, this is recommended to anybody with an interest in the Japanese way of life.

Ubisoft also released the sequel in Europe, which added cel-shaded visuals but not much else. The new visual style didnâ€™t really suit the game either; it seemed only to be employed to try and mask the heavy recycling of old assets.

Presumably because they were relatively cheap to produce, more than a few PS2 budget games were pinball collections. Whereas most featured licensed tables, Flipnic – published by Capcom in the US and Ubisoft in Europe – took the fantasy approach. Gravity and realistic ball physics were thrown out the window, in favour of tables filled with loops and rollercoaster-style tracks for balls to whizz around in. 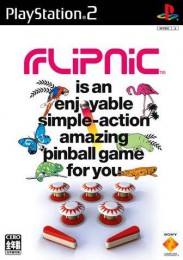 As for table themes, the four on offer varied from a metallic affair with a 1960â€™s sci-fi theme, and a nature table with waterfalls and wildlife, such as flamingos, crocodiles and butterflies.

The Â£19.99 price point allowed for some lavish presentation, with a soundtrack mostly promised of smooth jazz, and a softly spoken female narrator.

The opening screen is also worth a mention: when booting up the game youâ€™re presented with one of the 20-or-so animations, which use scoreboard style pixel graphics. The animation shown altered the amount of luck bestowed during play – a nice touch.

Thereâ€™s a downside to Flipnic though, and sadly itâ€™s a major one â€“ itâ€™s prone to crashing. Consider anything over an hour of uninterrupted play a bonus.

On first glance, Darwin â€“ also known as The Adventures of Darwin in some parts of the world â€“ was a blatant clone of Nintendoâ€™s Pikmin. Scratch the surface though and youâ€™ll find that it had more than a few merits of its own. 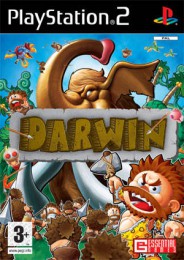 The story entailed troop leader Darwin â€“ a chattering chimp â€“ having a premonition of a world-ending meteor, who then sets about getting his fellow chimpanzee chumps ready to survive doomsday. Like Pikmin, thereâ€™s a safety in numbers theme and the labyrinth-like levels â€“ which featured puzzles â€“ were viewed from a similar perspective.

There was no time-limit to each stage, though, and so the overall vibe was far more relaxed. Instead, the focus was on revisiting previously completed stages with new skills, in order to access new areas.

At the start only three followers are at your disposal, with more becoming available by collecting the yellow stars dotted around the wilderness. These were usually hidden in the back of caves or given as rewards for solving puzzles. The more followers you have, the more materials you can carry back to the village and the easier combat becomes.

Many of items improved Darwinâ€™s primitive society, while tools helped the crew to evolve, slowly transforming them into cavemen. Once nice idea was that the tribesmen became more articulate as time passed. A rough translation job did sadly stop this idea from being truly great, though. The controls were another issue, lacking the refinement and ease of use of Nintendoâ€™s classic.

Still, this was leagues better than the vast majority of Â£9.99 budget games â€“ D3 clearly wanted it to be a decent alternative to Pikmin, and weâ€™re certainly pushed hard to think of anything else like it on PlayStation 2.