This week Wii U owners have something to smash open their piggy bank for – Paper Mario: Color Splash. Itâ€™s the first major Wii U release in quite some time. Sadly, itâ€™s also Nintendoâ€™s only significant system exclusive for the remainder of this year. 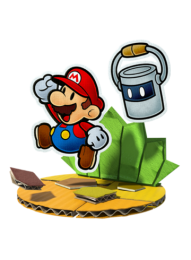 Indeed, the pickings are getting even slimmer for the Wii U, with only a scant handful of third-party titles due between now and Christmas â€“ Skylanders: Imaginators, Just Dance 2017 and the budget-priced Darksiders: Warmastered Edition. We may see a few surprises on the eShop though, so letâ€™s not cast doom and gloom just yet. Weâ€™re hoping for some unexpected Virtual Console releases of the N64 variety.

Anyway, we digress. Color Splashâ€™s E3 unveiling didnâ€™t go down too well, with many comparisons made to series low Sticker Star. Since then, however, anticipation has risen with hands-on previews being mostly positive. It also appears that the team is putting a great deal of attention into the dialogue, with several tongue-in-cheek references already shown on social media.

The eShop price has been set at Â£39.99, putting it in line with the current Amazon pre-order price. And probably GAME, too.

The Wii U eShop sees five other releases this week. Party game ACT IT OUT! A Game of Charades (Â£8.99) makes the jump from PS4, while 2.5D platformer Ninja Pizza Girl (Â£7.99) leaps over from PC and Xbox One. The latter didnâ€™t rate too highly, but the former did manage to gain some decent reviews.

â€œThere’s a refreshing dose of creativity here, and it’s clear that the developer cared about crafting intelligent and varying scenarios, but regrettably it’s an experiment that tries too many different things without truly mastering any of themâ€ they said.

Thereâ€™s a Wii U Virtual Console release lined up for this week too â€“ Wii launch title WarioWare Smooth Moves. We probably arenâ€™t alone in saying that the Â£17.99 asking price is rather off-putting.

Super Mario also shows his face on 3DS this week, in Mario Party: Star Rush (Â£34.99). This one is apparently faster paced than its predecessor, while also offering the chance to play with three others using just one cart (via a free party guest download). 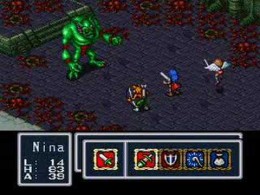 Fortunately, the New 3DS VC releases are far more exciting â€“ Capcomâ€™s SNES RPGs Breath of Fire and Breath of Fire II. Thereâ€™s the usual promotion in place â€“ buy one for Â£7.19 and get the other for Â£3.59. Offer expires 20th October. Donâ€™t expect an easy time with either â€“ these are brutally tough â€˜old skoolâ€™ RPGs that donâ€™t hold back.

As for discounts, five Wii U games are due a drop – Infinity Runner, Word Search by POWGI, Dracula’s Legacy, Jones on Fire and Queen’s Garden. Word Search by POWGI also drops in price on 3DS, along with Aqua Moto Racing 3D, Urban Trial Freestyle, Castle Conqueror Defender and a bunch of no-doubt-thrilling virtual pet games from Treva Entertainment. One of these â€“ Life with Horses 3D – is still Â£13.49 with a discount, hence why we arenâ€™t going into any further detail.