Ashens came across Explosion Royale while browsing a charity shop in Norwich back in 2012. Packaged in a badly printed case, he initially believed he had found a bootleg of a little-known NTSC release. Testing the disc on a chipped PS2 proved fruitless, however â€“ it wasnâ€™t until trying it out via an emulator that he found that it was in fact an early demo of an unreleased game.

Very little information about Explosion Royale is known, save for the fact that it was in development at King of the Jungle, a London-based outfit best known for B-Movie on PSone and PS2 budget game GrooveRider: Slot Car Racing. The developer was purchased by Unique Development Studios in 2000, which closed in 2004. The gameâ€™s title screen shows a date of April 2003. It stands to reason, then, that the cancellation was due to the publisherâ€™s closure.

Just one unfinished level features in the build, plus a short intro sequence showing the lead character driving a tank and piloting an aircraft. The intro ends with the lead crashing their jeep into a cliff face, suggesting that a humorous tone was going to be present. 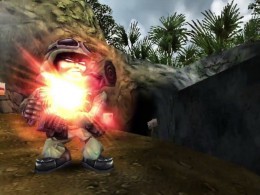 Visually, Explosion Royale was very similar to Batallion Wars on GameCube, featuring cartoon-like characters and flamboyant explosions. The demo stage has a long list of missions to tackle â€“ from finding hidden gold bars to planting explosives on a â€˜super gunâ€™ â€“ which hints at a non-linear structure. This ambiguity comes from the fact that the demo is in such an unfinished state that only a small taster is available â€“ Ashens is able to talk us through the whole thing in mere minutes.

Ashensâ€™ extraordinary find is now in the hands of Unseen 64, via Did You Know Gaming, who will no doubt put on their detective garb and attempt to find out more. Maybe theyâ€™ll get lucky and find a few extra tidbits on the disc. Either way, rest assured that youâ€™ll be hearing more about Explosion Royale soon.