The NGC team must have mulled over putting the Nintendo DS on issue 105’s cover as the mag included reviews of every single UK launch game. Primarily being a GameCube magazine, though, it was Namcoâ€™s Starfox Assault that took the newsstand limelight. And who was here to welcome us this month? Why, itâ€™s only an opening page penned by Slippy Toad, in lieu of a new editor waiting in the wings. 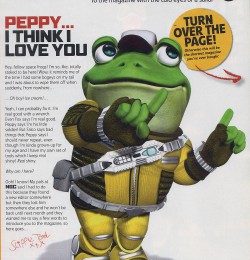 â€œHey, fellow space frogs! Iâ€™m so, like, totally stoked to be here. Wow, it reminds me of the time I had some bogeys on my tail and was about to wipe them off when suddenly, from nowhereâ€¦oh boy! Ice cream!â€

This issue from April 2005 is a pretty good example of the amount â€“ and quality â€“ of software the GameCube received on a monthly basis. The console have been outsold by both the PS2 and Xbox, but publishers were still committed.

April saw the release of Starfox Assault from Namco, Capcomâ€™s Viewtiful Joe 2, Mario Party 6 from Nintendo, a trio of games from EA â€“ Fight Night Round 2, FIFA Street and TimeSplitters: Future Perfect â€“ plus a handful of kidâ€™s licensed games. The GC certainly wasnâ€™t short on software, with a page long release schedule in the mag to prove it.

â€œUnfortunately this belated GameCube version isnâ€™t based on the decent Xbox version. Itâ€™s a port of the comparatively poor PS2 edition, which is a completely different game developed by a completely different team, and therefore quite hard to recommend, that is unless youâ€™ve always wanted a Clancy-based Doom-style shootâ€™em upâ€. Harsh but fair â€“ when reviews appeared the following month, they were mostly around the 5/10 mark. 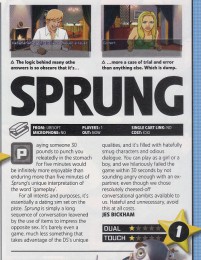 With previews out of the way, the staff then cast their critical eyes over all 14 UK Nintendo DS launch titles. Itâ€™s easy to forget that Nintendo was gunning for hardcore Nintendo fans during the DSâ€™s early days. It wasnâ€™t until the arrival of the DS Lite and Dr. Kawashimaâ€™s Brain Training that the Kyoto giant targeted casual gamers, complete with a highly successful marketing campaign showing B-list celebs playing the DS whilst on the toilet. Or was it while lounging around in the living room? We forget.

After taking a good look at the handheld itself, the second wave of games got an airing. The team was very eager to get their hands on Castlevania DS, a tad optimistic about Another Code and Lost in Blue, and curiously positive about both Meteos and, uh, Pac-Mix. Presumably, that was a typo. They also rightly called out Need for Speed Underground 2 to be a stinker. EA didnâ€™t put any major effort into DS development until it started selling gangbusters. 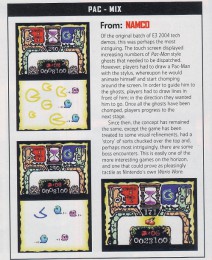 Super Mario 64 DS lead the review charge. We always found this conversion a little odd; the N64 original was focused on the use of the then groundbreaking analogue stick, yet the DS was lumbered with a digital d-pad. It garnered a 4/5, putting it just behind Wario Ware Touched â€“ which gained top marks – as the essential launch game. Project Rub, Zoo Keeper, Yoshiâ€™s Touch and Go and Polarium also gained 4/5s, ergo a recommendation.

When it came to the usual launch day dross, the team didnâ€™t hold back. Asphalt Urban GT, Sprung and Ping Pals walked away with shameful 1/5s while Rayman DS, Pokemon Dash, Spider-Man 2, Mr. Driller, Tiger Woods and The Urbz gained a mixture of 2s and 3s. Rickety movie tie-in Robots meanwhile got a bit of a kicking, resulting in a dire 2/5. Itâ€™s not surprising that we had forgotten all about it appearing in the launch day parade. 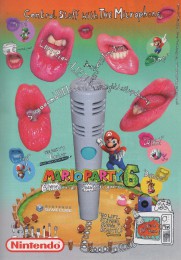 The tedious tinman collect-a-thon also hit GameCube this month, but for reasons obvious that review was reduced to the last couple of pages of the review section, alongside Tak 2, budget game Neighbours from Hell and Konamiâ€™s half-baked hard-shell brawler TMNT 2: Battle Nexus. â€œThe turtles are back! Hello? Anyone? Is this thing on?â€

As for the big hitters, TimeSplitters: Future Perfect â€“ the last we ever saw of Cortez â€“ gained 88% despite the lack of an online mode. Some things never change, eh? FIFA Street received a three-page review resulting in a 71% final score, whereas Mario Party 6 had just one page dedicated to it. Even though Nintendo attempted to induce some originality via the mic peripheral, as shown elsewhere on this page with a rather garish advert, NGC felt that the series was still in need of a shake-up.

Viewtiful Joe 2 had a far easier time, being billed a â€œbrilliant sequelâ€ and gaining 87%. Starfox Assault wasnâ€™t quite as lucky. NGCâ€™s ten-page review of the US version ended with a disappointing 73%. Our memory fails us here, too â€“ weâ€™d also forgotten all about a trio of Namco arcade hits being hidden on the disc. Xevious, Battle City and Starluster all featured as unlockable extras. Weâ€™d wager that Slippy Toadâ€™s Xevious score isnâ€™t too hard to beat.

The mag ended with several pages of Resident Evil 4 tips, the regular rundown of the systemâ€™s best titles â€“ with RE4 currently sitting on top of the pile, ahead of Wind Waker, Metroid Prime and Mario Sunshine â€“ a four-page letters section and a â€˜Making ofâ€™ TimeSplitters: Future Perfect. â€œThe idea of monkeys with guns actually came about in America during the â€˜50s,â€ said team leader Hasit Zala.

â€œThe US army experimented with forming a true gorilla army. Just as the navy-trained dolphins to mine ships, the army attempted to create its own unique mammalian force, even going so far as designing new weaponry such as The Banookaâ€.

If you believe that, youâ€™ll believe anything.