Although the Wii U sees six new indie releases this week, the 3DS still manages to steal the limelight in this weekâ€™s UK eShop line-up.

This is due to the arrival of two significant releases â€“ Square-Enixâ€™s rebuilt role-player Dragon Quest VII: Fragments of the Forgotten Past (Â£34.99 with free theme) and the New 3DSâ€™s Futuridium EP Deluxe (Â£5.99 until 22nd September, Â£7.99 thereafter). 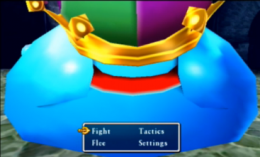 Whatâ€™s Futuridium, you ask? Think along the lines of a super trippy take on Star Warâ€™s infamous Death Star trench run scene. As well as the temporary discount, itâ€™s also free to those who already own it on Wii U. Moreover, the Wii U version is due a price cut to Â£5.99 from Thursday. Bonus!

Reviews of Dragon Quest VII havenâ€™t gone live yet, but with a bit of luck theyâ€™ll be online by the time we come to pen our multi-format new release round-up. We will however point out that it can be found for less than Â£34.99 in physical form â€“ itâ€™s currently Â£28 to pre-order from Amazon.

The 3DS gets one other new title – Splat the Difference (Â£4.50), which put a messy twist on good old spot the difference. Four players can partake using just one copy of the game.

Three of the games gracing Wii U are making the jump from Xbox One â€“ top-down racer Grand Prix Rock ‘N Racing (Â£4.45 until 22nd September, Â£7.19 thereafter), 2D puzzler Gear Gauntlet (Â£7.99) and the rather blatant Alleyway/Breakout/Arkanoid clone Brick Breaker (Â£4.49). Gear Gauntlet may be worthy of your time, gaining a few 7/10 reviews upon release. The other two? Mediocre at best.

Thereâ€™s a new Wii U VC release this week, too â€“ the DSâ€™s Metroid Prime: Hunters (Â£8.99). An early release for the handheld, and intended to show off the systemâ€™s 3D capabilities, it gained recent reviews at launch but quickly faded into obscurity.

Weâ€™ll be honest with you – we arenâ€™t sure how itâ€™ll one will fare nowadays, especially on non-native hardware.

Yo-Kai Watch on 3DS also looks set to receive a price drop until 1st October, but Nintendoâ€™s press release fails to disclose a price. Keep an eye on the eShop if you’re curious, but don’t expect to see a hefty cut – Nintendo doesn’t do rock bottom prices.